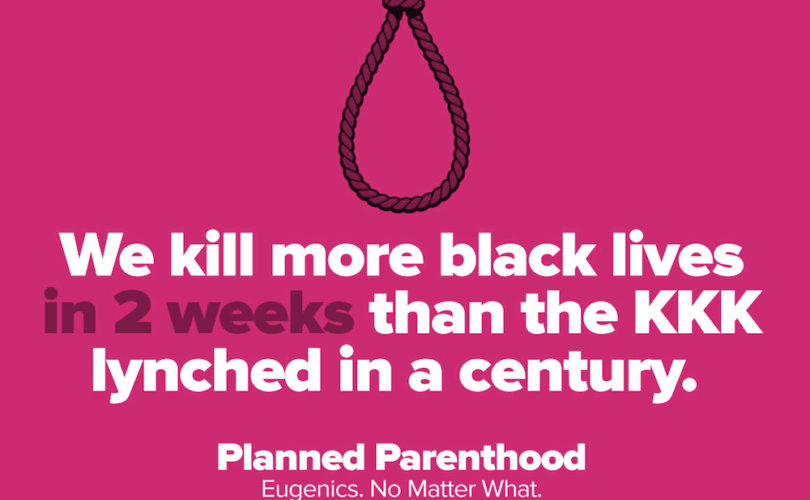 A Christian pastor who posted this message from a black pro-lifer was met with outrage by some on social media.Radiance Foundation

REDDING, California, July 31, 2018 (LifeSiteNews) — Social media trolls so lambasted the pastor of a Christian church – deriding him as a racist for sharing a meme ironically developed by a black pro-lifer about Planned Parenthood – that he has taken it off Instagram and apologized.

“Please forgive me,” wrote Bethel Church senior pastor Bill Johnson. “Our black community is one of our greatest treasures and they continuously make us better.”

Backpedaling by the pastor is breaking the heart of Ryan Bomberger, the black man conceived out of rape who developed the meme that led to this tempest in a teapot.

Bomberger, a Christian pro-life crusader who founded the Radiance Foundation, is saddened that America has gotten to the point where giving offense is seen by many as a greater ill than the taking of human life through abortion.

“I’m heartbroken that in 2018 ‘offense’ is more important than injustice,” said Bomberger. “We should be outraged that, as a society mostly public educated, we know so little about our history. As a society that claims to be predominantly Christian … we do too little, too late to pursue justice for the weakest among us.

“The outrage over the meme is misplaced,” he said.

Bomberger’s meme shows a noose and the message, “We kill more black lives in two weeks than the KKK lynched in a century.” Under that are the words “Planned Parenthood/Eugenics. No Matter What.”

The message is clear.

It’s that the killing of even greater numbers of unborn black babies today in Planned Parenthood abortion mills is as horrific and racist as the killing of black people by the Klu Klux Klan in America’s dark past.

Or maybe it’s not so clear for those who live their lives on social media sites.

Soon after Johnson shared the internet meme, he was skewered online.

“Your favorite Bethel leaders are racist,” alleged Madeleine LeClerc. “Worse than the post itself even is the way they respond to actual black members of their congregation who are hurt by this.

“This church has gotten away with so much because they ‘bring money into town,’” she wrote on Facebook. “Y’all don’t need them. They’re skyrocketing your rent and taking over your town.”

All this social media hand-wringing and gnashing of the teeth, though, may not be what it appears.

Bomberger suggests that activists are simply using race as an excuse to avoid addressing the real-life consequences of what he considers to be real, systemic racism on the part of Planned Parenthood’s abortion mills.

“Many people of my brown complexion wholeheartedly agreed with, and shared, the meme,” said Bomberger. “As someone who has crafted messaging on abortion, racism and other pivotal social issues, I’ve learned that with those who oppose your worldview it's not really about how you say it. I get the same kind of outrage over innocuous, cuddly memes. Someone will always be offended.

“The mere fact that you’re talking about abortion and/or race triggers those who’d rather become the victim instead of triggering a compulsion to do something about the real victims — 60 million of them since Roe v Wade,” he said.

Although Johnson eventually took down the meme comparing Planned Parenthood to the KKK, Bomberger still applauds him for putting it up in the first place.

“He was bold enough to engage in the conversation. He and his son were brutally attacked, online, for daring to look at America’s past and present colliding,” said Bomberger. “I’m sad that the backlash led him to remove the post, but he still staunchly defended it, and the overall message, in his Instagram reply.”

And the pro-lifer claims those who decried the meme were in the minority.

“There were far more who supported the meme, both on Bill Johnson’s Instagram feed and our social media platforms, than those who protested it,” Bomberger said.