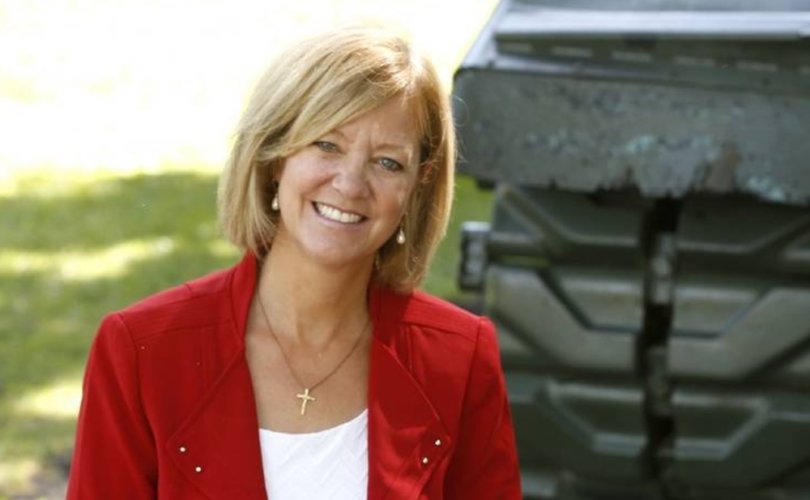 So Jeanne Ives, who currently represents the state’s 42nd district, released an ad showing people “thanking” Rauner for what he’s done for them.

“Thank you for signing legislation that lets me use the girls’ bathroom,” says a man wearing makeup and a dress.

“Thank you for making all Illinois families pay for my abortions,” a woman wearing a pink “pussy hat” says.

A young man with a bandana covering much of his face – a seeming representation of the “anti-fa” movement – “thanks” Rauner for making Illinois “a sanctuary state for illegal immigrant criminals.”

The ad also illustrates how Rauner has, at the expense of most of his state’s population, helped wealthy businessmen and radically left-wing Chicago teacher unions.

Rauner’s campaign spokesman trashed the ad as having “no place in Illinois.”

“There is no place in the Illinois Republican Party for rhetoric that attacks our fellow Illinoisans based on their race, gender or humanity,” Rauner said in a statement.

Ives’ ad has been called “racist,” “sexist,” “transphobic,” and “repulsive.”

Slate called it a “bigoted ad that mocks trans women.”

But Ives has defended her ad, asking what exactly is so offensive about these accurate portrayals of Rauner’s policies. She also isn’t buckling to pressure to yank the ad off the air – and instead secured a $2 million donation to keep it running.

“The fact that you saw a visual representation of the policies [Rauner] put in place is maybe considered offensive,” she said. “I don’t understand that.”

“Rauner chose Planned Parenthood and Personal PAC over pro-lifers or even simply over abiding the sprit of the Hyde Amendment, which remains in force at the federal level,” she explained. “And Rauner chose the political agenda of the LGBTQ movement over the privacy interests of moms and dads who don’t want their daughters forced to be in the same bathrooms and locker rooms as men.”

“This is a real issue being litigated in Palatine Distinct 211 and across the country,” Ives explained. “Last month a Wisconsin school district agreed to pay a transgender student $800,000 to settle a lawsuit she filed in a successful attempt to share bathrooms and overnight sleeping quarters with male high school students. There was a story in the New York Post over the weekend about a father-daughter dance at a Staten Island elementary school being cancelled because it offended the trans rights community.”

“I’m sorry, but as parents of a daughter in elementary school, my husband Paul and I are not on board for this,” she said.

“As Christians we believe every person is made in God’s image and deserving of dignity, said Ives. “I respect people who are different from me. I respect people who have different views than me. In fact it seems that the converse is not true among many (with) whom I disagree. They shouldn’t be silenced. But neither should I. And I won’t be.”