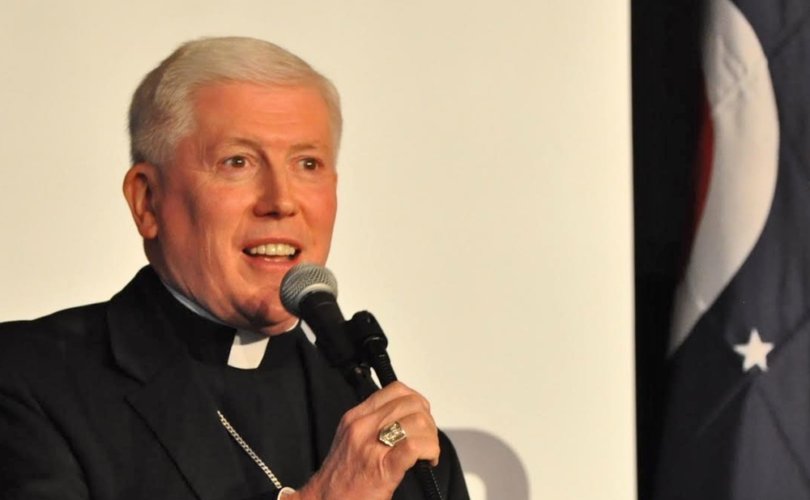 INDEPENDENCE, Ohio, March 12, 2018 (LifeSiteNews) – Politicians who publicly support abortion and euthanasia do not “share fully and practically in the faith of Christ,” Bishop Daniel Thomas of the Catholic Diocese of Toledo told a top pro-life conference over the weekend.

“Every Catholic and every Christian is a missionary of the good news of the dignity and sanctity of the human person made in the image of God and redeemed through the human body of Jesus Christ His Son on the Cross,” Bishop Thomas said. “No one, least of all those who exercise leadership in society can claim to share fully and practically in the faith of Christ who at the same time publicly support practices of abortion and euthanasia.”

“If to be truly Catholic and truly Christian is to be pro-life,” Thomas said, “than any person who embraces an ideology or political stance which does not by law protect the most innocent among us, including the unborn, then they’ve renounced the very heart Catholic Social Teaching, which has as its foundation the word of God and the very design of human nature.”

The Toledo bishop spoke about family, citizenship, and the call to be saints at the Bringing American Back to Life (BABL) convention in Cleveland.

Sponsored by Cleveland Right to Life and billed as an educational event for the grassroots, BABL has grown steadily in its nine years of existence. Hundreds of pro-life advocates from Ohio and other area states gathered Friday and Saturday for what’s become a premier pro-life gathering.

In his presentation, Thomas expressed avid support for life, marriage, and religious freedom. He offered his thoughts on how pro-life advocates to work to these things in today’s culture.

“To bring America back to life, we have to be those citizens who bring our faith into the public square, engaged, informed and politically active for life, for marriage and for religious liberty,” the bishop said.

One only need visit Pope Paul VI’s Humanae Vitae encyclical to see the roots of the current devastation of the family, he said, detailing specifics of the societal damage wrought by the birth control pill since its release.

Paul VI’s encyclical is in its 50th year and the focus of considerable attention with reports of a “re-examination” of the landmark document upholding the Church’s perennial condemnation of artificial birth control underway in Rome. HV came up in a number of presentations made during Bringing America Back to Life.

“The full embrace by our nation of the sexual revolution has led us to abandon in our modern day the definition of marriage and gender identity that even ten years ago would have been considered impossible or an absurdity,” said Bishop Thomas.

We need the family

He added that to challenge the culture of death, it will take nothing less than the restoration of culture via the family, the articulation of the truth in love, and the holiness of individuals who surrender to God’s will.

“Our entire society depends on the family,” Thomas said. “It’s from the family that children first become aware of their dignity as human persons, and receive their first formative ideas about truth, goodness, love, virtue and what it actually means to be a human person.”

The importance of marriage, family and fatherhood were at one time the standards of society, the bishop said. “Sadly today, we have devalued the complementarity of the gift within family of mother a mother and a father being present for and with their children,” he added.

“The consequences for doing so,” said Bishop Thomas, “if we look back over the 40 or 50 years behind us, are truly dire. Sadly today we have devalued family.”

He ran down statistics illustrating the negative societal effects associated with the breakdown of the family, saying they should awaken us to the importance of keeping the family together.

'God has given us a design, an ideal, a foundation to aim for'

Bishop Thomas echoed various other prelates today in acknowledging other-than-ideal familial situations. He did not, however, take the view of those who argue the Christian ideal of the family is unattainable.

“No one is perfect,” the bishop stated, “no family is perfect, and we all sin and fall short of the Glory of God and his design for the family.”

“But no family being perfect, we’re always called pastorally to walk with our brothers and sisters in whatever situation they may find themselves,” he added. “Yet with the knowledge that God has given us a design, an ideal, a foundation to aim for.”

Since the Extraordinary Synod on the Family in Rome and release of Pope Francis’ Amoris Laetitia, some bishops have floated the thought that God’s design for marriage and the family is a standard too high for Catholics to achieve.

Bishop Thomas laid this theory bare by explaining a key aspect of Christ having come in human form to redeem us.

“Still there is an ideal, an ideal not only that the Church holds up, but an ideal given to us by God himself,” he said. “Why? Because he chose to come to us in a family – a mother, a father and a child.”

Get started at home

He ran through numerous data on the negative consequences of men being absent as father and husbands, stating, “The statistics are clear: Fathers matter, moms and dads together matter, families matter.”

“If we want to bring America back to life, then it’s time to revivify the family,” he said. “Founded upon the gift of a husband and wife, built on the wisdom of God’s design that every child deserves a mother and father, the resurrection of the family must start first and foremost with our very own.”

Bishop Thomas encouraged resolve in the face of resistance to Christian principles in the public arena, and also dismissal of “the modern-day tyranny of the notion of the separation of church and state.”

“Today so many Catholics and Christians have embraced a false pluralism,” he stated, “a pluralism which states that all ideas are equal and that you’re allowed to have your moral convictions but you have to keep them to yourself, to your homes, your own churches or your conscience, because your truth is not my truth.

That’s not what the First Amendment says

“The First Amendment of the Constitution does not speak of freedom of worship, it speaks of freedom of religion,” he clarified. “Our faith is not to be confined in the walls of a church, or in the corners of our brains. We’re called to live our faith as religious people in all aspects of our lives.”

Catholics and Christians must “declare that democracy is not the substitute for morality,” the bishop told the pro-life crowd. “Democracy stands or falls on the foundational values it embodies and promotes.”

“And if we are not promoting the truth of the human person, our dependence on the providence of God and belief in the common good,” he said, “then we are doomed to drift into oblivion by the fickle winds of popular mentality of the current age.”

Thomas called for promoting public officials for office who embody the virtue we desire to see in ourselves. More must be demanded of politicians, he said, and the pro-life community should foster and form politicians who will be models and will be informed by their religious beliefs.

Life is the foundation

He cited the 1998 USCCB document Living the Gospel of Life, which employs the analogy of the human person as a house.

“We cannot be concerned with the poor, the immigrant, human trafficking, etc., without first the fundamental concern of the foundation of that house,” stated Bishop Thomas, “human life itself.”

Thomas also quoted Pope St. John Paul II's document Evangelium Vitae — from which the USCCB document is derived — in which the right to life is defined as the foundation of all other inalienable rights.

To be Catholic is to be pro-life

“So to be clear, to be Catholic, to be Christian, is to be pro-life,” he said.

The bishop said pro-life advocates were called to engagement in the public square “with fervor, zeal, passion, charity mercy kindness,” and he offered the caution of being zealous but not zealots.

Everyone who claims Christ as Lord should remember that each is called to preach and live his message, said Thomas, “and woe to us if we do not preach it.”

Thomas has been bishop of Toledo since 2014. He was Apostolic Administrator of the Diocese of Cleveland from December 2016 until Bishop Nelson Perez was installed in Cleveland in September of last year. Thomas is also a Consultor for the USCCB’s ProLife Committee.

Where the rubber meets the road

He is involved in a direct fight to lobby ProMedica, a health care system with locations in northwest Ohio and southeast Michigan, whose board of trustees recently signed a transfer agreement with Capital Care Network, Toledo’s last remaining abortion facility. Thomas explained to the Cleveland pro-life conference that the agreement keeps the abortion facility open, “where it can continue to take innocent lives.”

He has also pushed the issue in public, with an initial statement published in the press and then a subsequent op-ed in the Toledo Blade. Thomas has also personally written a letter to each board member of ProMedica about the transfer agreement.

“Undoubtedly, I will face backlash for such actions, and frankly already have,” stated Bishop Thomas, “but none of us can afford any longer to stand idly by as innocent life is threatened.”

“A moment has arrived for the nation that will determine for generations what type of culture we will become,” the bishop said, “and more challenges are to come.”

Defenders of life need to be willing to lay down their lives, fortunes, and comfort to fix the broken culture, he said.

The answer is simple, Thomas told the pro-life crowd – to become saints. He referenced a quote from Blessed Mother Theresa that said the saints were sinners who never stopped trying.

He also said it’s important to recognize who the enemy is – the devil and sin.

“There is only one thing for us to do,” stated Thomas, “to storm the gates of hell.”

“This requires preparation to articulate the truth that the rights of life, liberty and the pursuit of happiness exist because God authored them,” he said.

“How do we do it,  except to do it in the Lord,” the bishop said, exhorting the crowd, “You were made for this.”