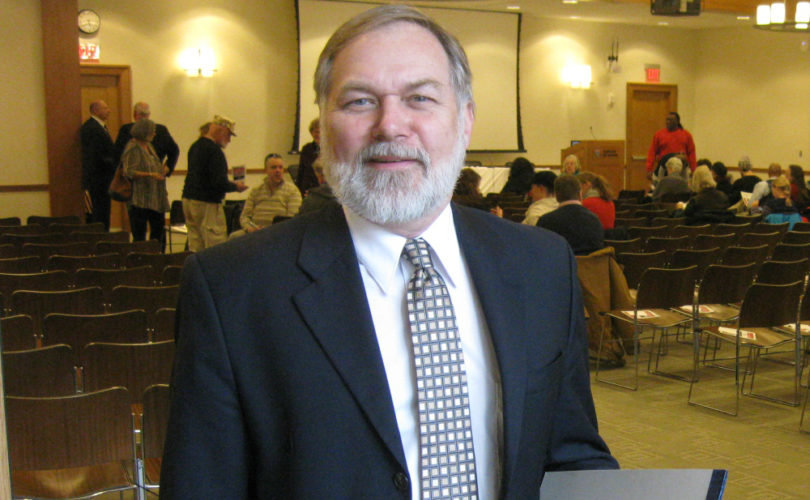 June 6, 2017 (LifeSiteNews) — A federal district judge yesterday dismissed a leftist lawsuit against Christian pro-family advocate Scott Lively, who was sued for “crimes against humanity” for helping political and faith leaders in Uganda resist the LGBTQ agenda in the east African nation.

Massachusetts District Judge Michael Ponsor, in a ruling laced with harsh pro-homosexual attacks on Lively, nevertheless dismissed the SMUG (Sexual Minorities Uganda) LGBT lawsuit against Lively — five years after it was filed with the help of the far-left Center for Constitutional Rights (CCR).

Ponsor cited a 2013 (unanimous) U.S. Supreme Court ruling that the Alien Tort Statute did not apply to international claims as the reason for dismissing the lawsuit.

The Christian-defense legal group assisting Lively, Liberty Counsel, heralded the ruling but chastised Ponsor for failing to dismiss the case earlier and for lacing his decision with extremist, pro-LGBT rhetoric demonizing Lively and distorting his record.

“This is a victory for the Constitution and the rule of law,” said Mat Staver, Liberty Counsel’s founder and chairman, “and all Christians should celebrate the end of a lawsuit intended only to intimidate an innocent pastor into silence.”

Staver said the court’s “open display of activism in deriding Lively’s beliefs reminds us of the threats American Christians continue to face from a judiciary that is increasingly hostile to any expression of biblical truth to a decaying culture.”

According to Liberty Counsel, “after Judge Ponsor refused to dismiss the case in 2013, thousands of hours later, including 100 hours of depositions, and 40,000 pages of documents, SMUG failed to produce a shred of evidence of any conspiracy or persecution by Lively.”

“Rather, the evidence showed that Lively, in a country where homosexuality has been illegal for decades, urged treatment of LGBT people with respect and dignity, and the liberalization of Uganda’s laws against homosexuality, even as he spoke in favor of biblical sexual morality and against the LGBT political agenda,” Liberty Counsel stated.

Among the incendiary rhetorical barbs aimed at Lively in Ponsor’s decision were that the Christian pastor and author “aided and abetted a vicious and frightening campaign of repression against LGBTI persons in Uganda,” that he was guilty of “crackpot bigotry,” that Lively’s “persecutory efforts exploited a long history of Western homophobia in Uganda,” and that he “built somewhat of an international reputation for his virulently hateful rhetoric.”

But Lively, in an interview with LifeSiteNews, said Ponsor’s “raw and inflammatory … red meat for the Left” was probably intended to “mitigate their anger” at the judge for ending their “legal harassment” against him by correctly applying the jurisdictional limitation of the Alien Tort Statute.

He said one of the key takeaways from the case for pro-family advocates is: “Don’t fall into the clutches of a leftist judge.”

Liberty Counsel called the SMUG lawsuit a “direct challenge to the U.S. Constitution and the rule of law.” It said the Uganda-based SMUG organization “tried to create new and dangerous precedent using international ‘crimes against humanity’ — akin to genocide and war crimes — by relying on the obscure Alien Tort Statute.”

“Once Judge Ponsor properly concluded that he had no jurisdiction over SMUG’s concocted claims, his only duty was to dismiss the case and send SMUG back to Uganda the same way it came — empty-handed,” said Horatio Mihet, Liberty Counsel’s vice president of legal affairs and chief litigation counsel. “Judge Ponsor was without any authority — constitutional, legal, or otherwise — to showcase his contempt for the family values advocated by Scott Lively.”

Mihet said Ponsor’s “misinformed opinions about Scott Lively are not worth the paper they are written on.”

Lively relieved that it’s over

For his part, Lively in a statement thanked “the many thousands of friends and allies who have been praying for me and sending supportive messages since this bogus lawsuit began.”

“My pledge to you is to redouble my efforts to speak the truth in love and to support and equip the pro-family movement around the world,” he said. “Our vision for a family-centered society that tolerates but does not condone or normalize homosexuality and related disorders is a little clearer and brighter today.”

Lively, founder of Defend the Family International and the author of a half-dozen books opposing the LGBT agenda that include the Pink Swastika series about homosexual influence in Germany’s Nazi Party,  said he was “still trying to process” the end of the CCR-SMUG lawsuit ordeal.

“Their whole strategy was to rack up millions of dollars in attorneys’ fees to bankrupt us,” Lively said, citing the 14 CCR lawyers who worked on the five-year SMUG lawsuit.

As the Ponsor ruling states, Lively “traveled from the United States to Uganda twice in 2002 and once in 2009.”

Perhaps more than any other pro-family activist currently fighting the LGBT agenda, Lively has been targeted with vicious attacks by the pro-LGBT Left. In 2011, on the morning of the day when he was scheduled to give a speech for the pro-family organization Americans For Truth, the Christian school hosting the event was victimized by a brick attack that arrived along with an online leftist manifesto warning against having Lively as a speaker.

Notes on the large, paver bricks that went through a glass door at the Christian Liberty Academy north of Chicago read: “Shut down Lively,” and, “This is just a sample of what we will do if you don’t shut down Scott Lively and AFTAH … [F**k] Scott Lively. Quit the homophobic [sh*t]!”

Despite the leftist hate and hostility, Lively has never backed down, and in fact has spoken all over the world in recent years, in countries ranging from Britain to Poland to Russia, warning people and national leaders about the dangers of allowing an aggressive, American-style LGBT activist lobby to grow and prosper in their country.

The LGBTQ lobby organization Human Rights Campaign, in a 19-page report, singled out Lively for special condemnation, calling him — in the same brand of tendentious language found in Judge Ponsor’s ruling — “one of America’s most notorious exporters of hate.”

Matt Barber, a conservative civil rights activist, constitutional attorney and founder of Barbwire.com, told LifeSiteNews that it “cannot be overstated what a tremendous victory this is for free speech, biblical truth and especially for Scott Lively, who has been bullied by International homosexual activists and extremist, George Soros-related groups now for half a decade.”

“This frivolous case was a nonstarter from the beginning,” Barber said. “It's a perfect example of how leftist groups abuse the judicial system to engage in what I call 'lawfare.'”

Barber said it is “reprehensible” that Judge Ponsor allowed this case to move forward for five years “in order to try to punish Scott Lively, knowing full well the entire time that the court had no jurisdiction and that what he was doing was unconstitutional.”

Calling Ponsor a “radical leftist with a lesbian daughter and lesbian ex-wife,” he said the “homosexual activist” judge should be sanctioned for letting the Lively-SMUG case go as far as it did.

Ponsor’s “parting defamatory smears” against Lively, even as he dismissed the case, “shows beyond any doubt that this 'judge' is an anti-Christian bigot and not fit to sit as an objective arbiter of the law,” Barber said.

“To accuse Scott Lively of 'crimes against humanity' for merely preaching biblical truth about homosexual sin is more than ridiculous. It's laughable. Liberty Counsel should be awarded hundreds of thousands of dollars in attorneys fees for this abuse of the judicial system and Posner should be removed from the bench,” he said.

As if to illustrate the “good versus evil” nature of pro-family efforts to stave off the SMUG lawsuit, Liberty Counsel said, “SMUG is represented by the Center for Constitutional Rights, which has received funding from George Soros. CCR is located at 666 Broadway in New York, an apt address for such an organization that attempts to use international law to silence people of faith and attack Israeli government officials.”

The number “666” has long been believed by Christians to be the numerical symbol of Satan, based on the Book of Revelation (13:18).

“Rather than being a public interest law firm, the CCR is a hard-core left-wing legal group that defends various anti-American causes, ranging from accused Islamic terrorists to communists to Julian Assange and WikiLeaks. The group even praised Marilyn Buck, a member of the Weather Underground and Black Liberation Army, as a “human rights defender and fighter for justice.” The CCR works closely with the National Lawyers Guild, once described by a congressional committee as the “legal bulwark” of the Communist Party and still affiliated with the old Soviet-front known as the International Association of Democratic Lawyers.”