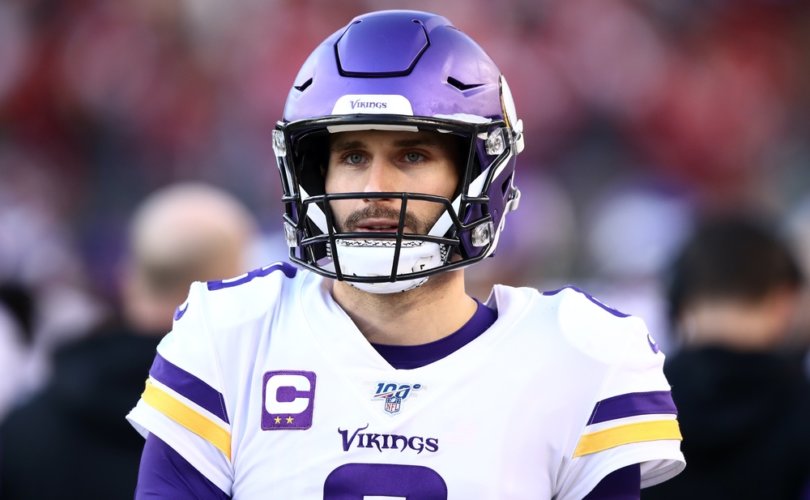 (LifeSiteNews) — NFL quarterback Kirk Cousins continues to resist the COVID jab, even though the NFL is putting pressure on players to take the shot.

NFL leadership has recently stated that it desires a mandatory vaccination policy for players similar to what it has for staff and coaches.

Non-playing NFL personnel are subject to a tier system that hinges on their vaccination status. Those who qualify for Tier 1 and Tier 2 are allowed to access “football only” areas, whereas those who are not in those tiers are denied access.

In April, the NFL released a memo explaining that all those with Tier 1 and 2 access “should be expected to be vaccinated unless they have a bona fide medical or religious ground for not doing so.” The memo also encouraged clubs to “schedule and participate in vaccine information sessions for players, family and staff.” It also clarifies that those who are vaccinated will have “work-related benefits” such as less rigorous testing and no required quarantine if exposed to a COVID-positive individual.

Unvaccinated players who have close contact with someone who tests positive have to isolate from the team for five days. Even if they test negative, they are still required to isolate, whereas a vaccinated player does not.

Cousins recently had to miss a few days of practice during the Minnesota Vikings’ training camp because he was in close contact with someone else who tested positive. Cousins did not contract COVID-19 but had to produce a series of negative tests in order to return to play.

Asked if he had relented and decided to take the jab, he said it was a “very private health matter.” He explained how he understood the rules and would work within them to ensure that he could play in games during the season. “As long as I cannot test positive and not have a close contact, I’ll be there for every game,” he said.

Cousins, the starting quarterback for the Vikings, is a committed Christian. Last year, he made headlines by stating his attitude regarding the risk of dying from COVID.

He said: “I want to respect other people’s concerns, but for me personally, if you’re talking no one else can get the virus, what is your concern you could get it? I’d say I’m going to go about my daily life. If I get it, I’m going to ride it out. I’m going to let nature do its course. Survival of the fittest kind of approach and just say if it knocks me out, it knocks me out. I’m going to be OK. Even if I die, I die. I kind of have peace about that. That’s really where I fall on it.”

Cousins has expressed that his Christian beliefs give him peace to make his own decisions about how to navigate the NFL’s COVID policies. He told The Athletic last September, “I don’t believe I control the outcome of my life. There are many things out of my control, but obviously my faith is at the foundation of my life, and I trust the Lord to handle things.”

His father is a conservative Christian pastor who ministers at Discovery Church in Orlando, Florida. Last year, a clip of Pastor Cousins preaching about the control Satan has over the media went viral. He commented on a host of political and cultural issues, including cancel culture, statues being toppled, and the fall of American education institutions. “Religion is being silenced as God is being removed from our culture,” he said.

The Vikings’ COVID jab rate is the lowest in the league at below 70%, and head coach Mike Zimmer has expressed his frustration at the low vaccination rate. “I just don’t understand. I just don’t understand,” he said. “I think we could put this thing to bed if we all do this. But it is what it is.”

The team even brought in an epidemiologist to try and convince the unvaccinated players to take the shot. Cousins seemed unmoved by the meeting and told a reporter, “It was informative. And it was what it was.”

Most NFL players have been vaccinated, but a host of notable players have declined to take the jab, including 2019 NFL MVP quarterback Lamar Jackson of the Baltimore Ravens.