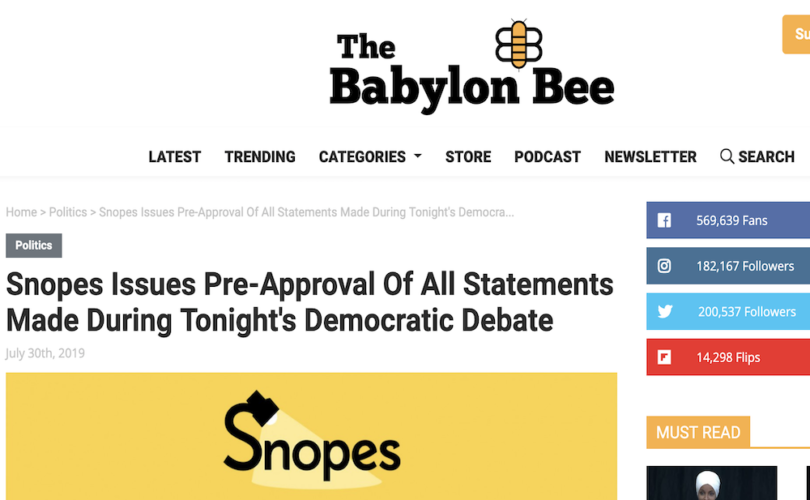 July 31, 2019 (LifeSiteNews) — Conservatives have long criticized the left-wing “fact-checking” website Snopes not merely for bias in its work, but for occasionally responding to satirical articles as if they were meant to be taken as fact. The site’s latest target, the Babylon Bee, has now retained legal representation in response to Snopes’s latest escalation.

Earlier this month, the Bee (a conservative Christian analogue to satire sites like The Onion) published a spoof piece about Democrat Georgia state rep. Erica Thomas accusing Chick-fil-A employees of admonishing her to “go back to your country” when they merely said “my pleasure” for serving her.

The piece was a play on both left-wing ire toward Chick-fil-A and a recent incident in which Thomas claimed that a white man at a grocery store checkout suggested she leave the country. It soon came out that the man, Eric Sparkes, was a Cuban Democrat who had confronted her about using the express lane with too many items rather than one of multiple empty lanes. She eventually backtracked to “I don’t know if he said ‘go back,’ or those types of words.”

Snopes subsequently rated the story “False,” admitting that the Bee is a satirical website yet purporting to fact-check it anyway because the “line between fact and fiction here is a bit blurry.” Snopes accused the Bee of “an apparent attempt to maximize the online indignation” and editorialized in its sub-headline, “we’re not sure if fanning the flames of controversy and muddying the details of a news story classify an article as ‘satire.’”

We “published a fictionalized version of the story”? That's certainly an interesting way of saying we satirized an absurd real-life event. You know, that thing that all satirical outlets do.

Now this sentence is quite troubling. Describing the Bee article as a “ruse.”

Let me define “ruse” for you: “an action intended to deceive someone.”

They've ascribed dark motives to the Bee while laughing off Onion fact-checks like HAHAA GUYS, “of course” it's satire! OF COURSE! Some readers just got confused, y'know!

While many may be tempted to dismiss the Snopes piece as an annoyance, the Bee explained to its readers via email Monday that the “fact-checking” website’s antics could have real-world ramifications on its livelihood.

“At one point, a piece of ours was rated ‘false’ by Snopes, prompting Facebook to threaten us with limitations and demonetization,” it said. “We made a stink about this, and after some media attention shed light on the problem, Facebook apologized for their handling of the matter and admitted that satire is not the same as fake news.

“We came out on top last time, but this latest smear from Snopes is both dishonest and disconcerting,” the Bee continued. “We have no choice but to take it very seriously…by lumping us in with fake news and questioning whether we really qualify as satire, Snopes appears to be actively engaged in an effort to discredit and deplatform us. While we wish it wasn’t necessary, we have retained a law firm to represent us in this matter.” Babylon Bee CEO Seth Dillon confirmed the seriousness of the statement in an email to Hot Air.

Snopes has since edited its original article to remove the most accusatory language and add an editor’s note claiming that it was “not the editors’ aim” to be construed as “imputing deceptive intent on the part of Babylon Bee” and announcing that the site is “in the process of pioneering industry standards for how the fact-checking industry should best address humor and satire.”

Past examples of Snopes promoting subjective left-wing views in the guise of impartial fact-checking include claiming it’s “problematic” to describe abortion as a “cause of death.”

In 2016, cofounder Barbara Mikkelson accused ex-husband and cofounder David Mikkelson of embezzling $98,000 from the company to spend on personal expenses, including vacations with prostitutes. David has denied the accusations.