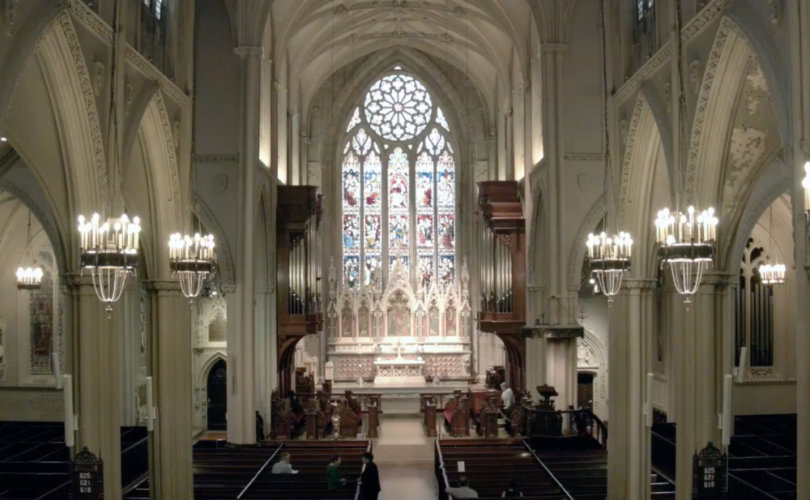 In remarks made to The Post Millennial on condition of anonymity, students said there was “tons of pressure” to act approvingly about the drag queen performance and to “pretend like it was normal.”

The controversial event was hosted in April by Grace Church School in downtown Manhattan, an independent Episcopalian school centered around Manhattan’s historic 1808 Episcopalian church. The school serves roughly 800 students from pre-K through 12th grade, and states it is committed to “inclusion,” “diversity,” and “antiracism.”

Students who attend Grace Church are required to go to chapel services at the Gothic style church once a week through eighth grade, and every other week through high school.

According to the school, “The core requirement in chapel is to sit quietly and with respect, observing the rule that ‘one behaves courteously in another person’s house.’”

That expectation appears to have been amended during at least one chapel service, however.

On April 27, students reportedly felt pressured to dance and play along when drag queen and LGBT activist Jesse Havea (who goes by the stage name “Brita Filter”) made a surprise appearance during the chapel service, dancing up the aisle in exaggerated and vulgar attire as rows of masked students in the pews applauded.

“Clad in electric orange go-go boots and a high-hemmed blue babydoll dress, he proceeded to strut and sashay down the aisle as if it were a runway, as some students began dancing in the pews,” The Post Millennial reported.

“I literally went to church to teach the children today,” the LGBT activist had said in a Tik Tok post, inaccurately referring to Grace Church as a “Catholic High School” and explaining the school had “invited me to their Pride Chapel.”

“Visibility matters and I’m so honored to have had the chance to talk to you about my work as a LGBTQ+ Drag Queen Activist,” said Havea, whose so-called “anything but pure” style is billed on his website as “putting a naughty twist on otherwise innocent topics.”

Grace Church also promoted the event in a statement published on its website.

“As celebrations take place across the globe, Grace was able to celebrate Pride together before the end of the school year,” the school stated.

Noting that the “festivities” kicked off on April 27 with “the high school’s LGBTQ+ Affinity Group,” which led fellow students “through this year’s high school Pride Chapel,” the school added the students were also “treated to a surprise guest — world-renowned drag queen, Brita Filter.”

The drag queen reportedly launched into a rendition of “Somewhere Over the Rainbow,” after which he “sat with Director of Vocal Music, Andrew Leonard, to answer questions about drag, representation and what pride month symbolizes.”

According to the Post Millennial, however, not all students felt comfortable having their chapel service turned into a drag show.

While some students apparently saw nothing wrong with a vulgar drag queen strutting up the church aisle and giving speeches about “what pride month symbolizes,” the outlet noted that “[o]thers did not want to join in.”

One student who spoke on condition of anonymity told the outlet that there was “tons of social pressure to dance along and pretend that this was normal for church.”

— Article continues below Petition —
Parents' Pledge: We will pull our children out of explicit sex-ed classes
Show Petition Text
3639 have signed the petition.
Let's get to 4000!
Thank you for signing this petition!
Add your signature:
Show Petition Text

Another student similarly said “[t]here was tons of social pressure to dance along and pretend like it was normal for sure … whether it be people tapping on shoulders and telling them to stand up or just a collective staring contest at whoever wasn’t totally participating.”

“Immediately upon entering there was a person handing out stickers with Pride flags on them, unironically saying ‘take one or you’re homophobic,’” the student reportedly said.

Another high schooler reportedly told the outlet that as the drag queen processed up the aisle of the historic church, some students joined, dancing in a sexually provocative manner.

“I wondered, is this really happening in a chapel?” the student reportedly said.

LifeSiteNews reached out to Grace Church for comment but has yet to hear back. This article will be updated if comment is provided.