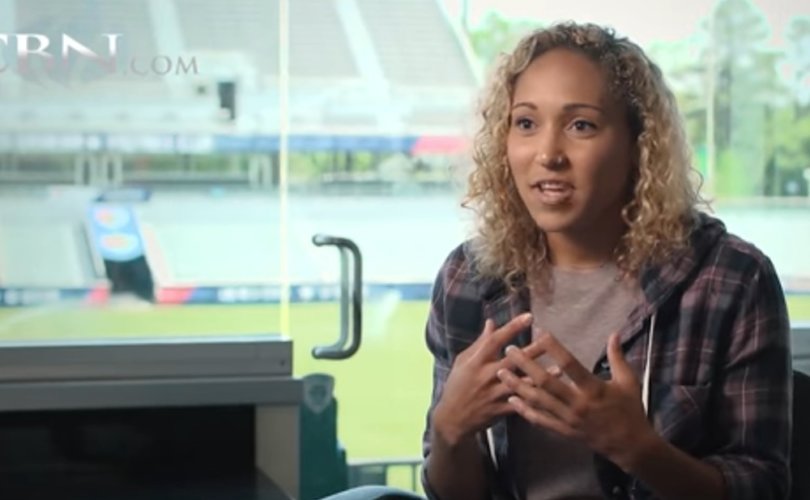 June 5, 2018 (LifeSiteNews) – The Christian soccer player who bowed out of the U.S. women’s national soccer team last year has confirmed it was because her faith conflicted with wearing a jersey celebrating gay “pride.”

“I just felt so convicted in my spirit that it wasn't my job to wear this jersey,” the player, Jaelene Hinkle, said in a new interview with the 700 Club. “I gave myself three days to just seek and pray and determine what [God] was asking me to do in this situation.”

Hinkle told the 700 Club that she wrestled with her Christian faith – to which she’d first committed at age 12 – and trying to fit in throughout her soccer career and college. But when she got a blood clot during her junior year at Texas Tech, she faced the possibility of never being able to play soccer again.

“Everything just came crashing down,” she said, and she promised God that if she’d be allowed to play soccer again, it would be for Him.

The blood clot subsided, and the doctor told her, “you have gotten a miracle,” she recalled. After that, “I wanted to know anything and everything about the Lord.”

Hinkle, who has not been asked to come back to the women’s national team, plays for the North Carolina Courage in the National Women's Soccer League. The Courage played in Portland, Oregon last week, where she was greeted by angry attendees who booed and jeered when her name was announced.

One soccer fan held up a sign in rainbow letters that said “personal reasons,” which is what Hinkle gave as her reason for leaving the national team last year.

Hinkle said it was “very disappointing” to give up something she’d dreamt about her entire life, but maybe the whole purpose of her stint with the national team was to be a witness to other players. The “peace” that came from following her conscience “trumped the disappointment.”

“I knew in my spirit I was doing the right thing,” she said. “I knew I was being obedient. Just because you’re obedient doesn’t make it easy.”

“If I never get a national team call-up again…that just is part of His plan and that’s okay,” said Hinkle. “And maybe this was why [I was] meant to play soccer. Just to show other believers to be obedient.”

“There’s no logical reason that women’s sports should be an especially uncomfortable place for someone with traditionalist views about homosexuality,” Kevin Williamson wrote in Hinkle’s defense for The Weekly Standard. “But the kulturkampf brigades will have only conformity, abject and absolute. That is part of the doctrine of ‘inclusion,’ which, perversely enough, exists for the purpose of excluding certain people with unpopular political or religious opinions.”

“Hinkle chose not to play. Fair enough,” he wrote. “To her credit, she has not engaged in Colin Kaepernick-level grandstanding or done the usual thing and filed a lawsuit. She only declined to participate, to give her affirmation.”

“Yet that’s an unforgivable crime for our so-called liberals,” Williamson explained. “That’s what’s really behind the demand for public funding of abortion, contraception, and the like: The strategy is to ensure that everybody is implicated, corporately.