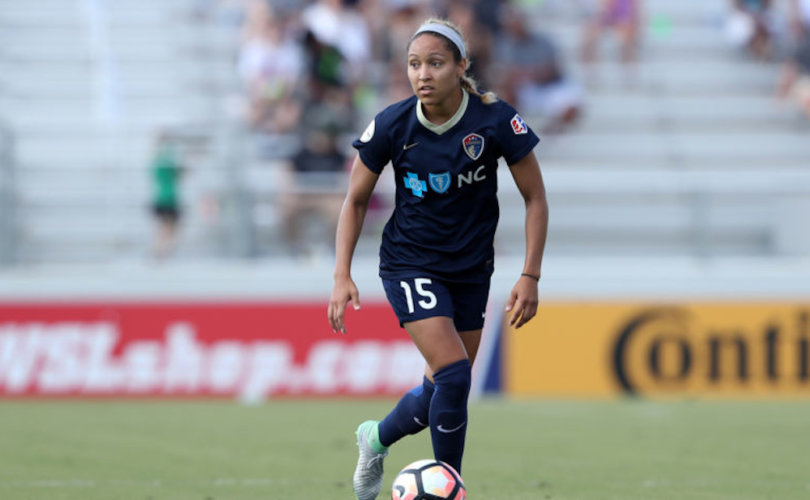 June 12, 2017 (LifeSiteNews) — A Christian athlete with the U.S. national soccer team has listed “personal reasons” for bowing out of games where her team will be wearing gay “pride” rainbow jerseys in support of homosexuality.

Team member and outspoken Christian Jaelene Hinkle has pulled out of those matches “for personal reasons.” U.S. Soccer did not replace Hinkle on their roster for the June games.

Hinkle is no stranger to persecution for her faith in Jesus Christ. She tweets Scripture, such as Colossians 3:23, “Whatever you do, do it as unto the Lord,” and adds, “If you live for people's acceptance, you'll die from their rejection.”

When the U.S. Supreme Court legalized same-sex “marriage in 2015, Hinkle converted the rainbow flag into a cross and posted on Instagram:

“I believe with every fiber in my body that what was written 2,000 years ago in the Bible is undoubtedly true … It's not a pick and choose what you want to believe. You either believe it, or you don't. This world may change, but Christ and His Word NEVER will.”

She continued in the Instagram post to call Christians to compassion for gay “lost, rejected, and abandoned men and women”:

“My heart is that as Christians we don't begin to throw a tantrum over what has been brought into law today, but we become that much more loving. That through our love, the lost, rejected, and abandoned find Christ.”

Hinkle noted that the rainbow logo adopted by homosexuals and transgenders actually is God’s enduring sign of His protective covenant with Noah:

“The rainbow was a convent made between God and all his creation that never again would the world be flooded as it was when He destroyed the world during Noah's time. It's a constant reminder that no matter how corrupt this world becomes, He will never leave us or forsake us.”

Gay activists vilified Hinkle for sharing her sincerely held Christian beliefs and stated they were looking forward to Hinkle having to wear the rainbow gay “pride” jerseys.

U.S. Soccer has recently took on a number of joint projects to benefit the homosexual organization, You Can Play Project.  Both the U.S. Men's and Women's National Teams will wear homosexual-affirming jerseys throughout June. The rainbow jerseys will be auctioned after June to benefit that group.

“Leave it to the women to be bold enough to take a stand for gender sanity,” one male observer commented to LifeSiteNews.