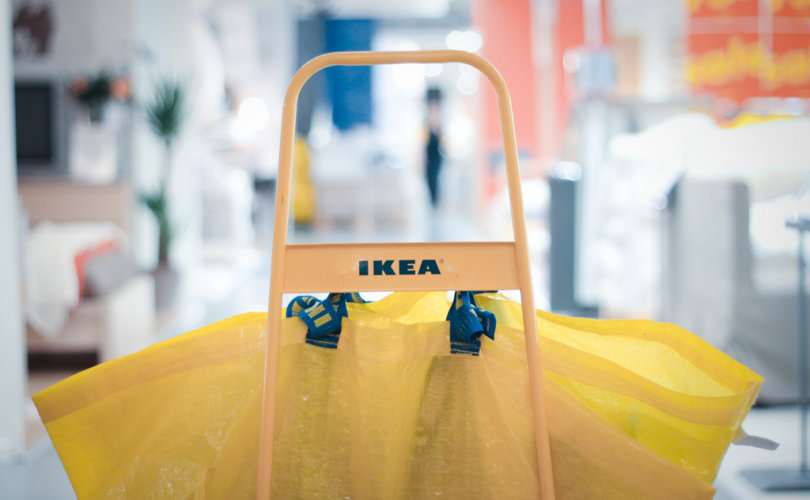 WARSAW, Poland, July 10, 2019 (LifeSiteNews) – Swedish furniture company Ikea is facing a lawsuit from a Christian ex-employee after firing him for refusing to delete a dissenting opinion on a company posting about homosexuality and transgenderism.

Newsweek reports that the dispute stems from an article Ikea shared internally on May 16, the International Day Against Homophobia and Transphobia, expressing its support for LGBT causes and calling on employees to converse with LGBT customers about their families and to ask customers for their preferred pronouns.

A Warsaw-based employee identified in the press only as Tomasz K took issue with the piece, because “I've been hired to sell furniture but I'm a Catholic and these aren't my values.” So he commented on the article that “acceptance and promotion of homosexuality and other deviations is a source of scandal,” and shared Bible verses Matthew 18:6 and Leviticus 20:13.

He says that soon afterward, he was asked to take down the comments. “I said that I cannot withdraw my words because this is a quote from the Holy Bible,” he explains. “As a Catholic I can not censure God.” So, Tomasz says, he was fired.

Ikea claims his words “could affect the rights and dignity of LGBT+ persons,” particularly the Bible verses he quoted. “[He] used quotes from the Old Testament about death and blood in the context of what fate homosexual people should meet,” the company said in a statement. “Many employees concerned by this entry contacted our HR department.”

In response, Tomasz argues his objection “was a reaction to indoctrination, which I had been subjected to in the workplace for years. The attitude imposed on IKEA employees on the postulates of the LGBT movement is radically different from the teaching of the Catholic Church flowing from the Holy Scriptures.” When he joined Ikea, he says, he never agreed to “represent the ideology of its owners.”

Tomasz also denies that he advocated hatred or violence toward homosexuals. “Every man deserves respect,” he said, and “you do not need to be a theologian or a philosopher to realize that the Holy Bible is not read in a literal way, and its text is full of allegories and hyperbole.”

With the aid of the Ordo Iuris Institute for Legal Culture, a Polish social-conservative organization, Tomasz has filed a lawsuit against the company for religious discrimination and wrongful termination. Ikea said last week it would not be making further public comments on the lawsuit.

“From the point of view of the law and above all of propriety and common sense, it is unacceptable to attack the Ikea employee who refused LGBT indoctrination in the workplace,” a group of Polish bishops said of the case Saturday, adding that Tomasz displayed “courage” and defended the Catholic faith in an “exemplary” way.

Newsweek adds that Ikea is also facing boycott calls over the incident, and Polish officials are even investigating the company for religious discrimination.

Despite Ikea’s hardline stance against employees privately expressing religious disagreement with homosexuality, Inc notes that the company maintains stores in Saudi Arabia and Qatar, where homosexual acts are illegal.