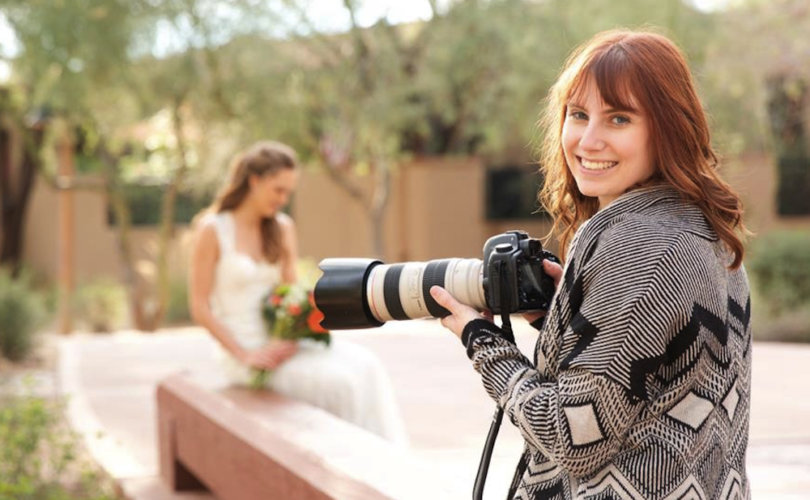 August 4, 2017 (LifeSiteNews) — A Wisconsin Circuit Court announced Tuesday that it will rule a Christian photographer can declare her faith-based intent not to take photos at homosexual “weddings” because her business does not have a storefront.

The court said her online business would not be prosecuted under a Dane County law banning “discrimination” based on “sexual orientation.”

Evangelical Christian Amy Lawson, who describes herself as “a Madison portrait and wedding photographer with a passion for telling visual stories that glorify God,” had once advertised publicly that she would not take photos that promote homosexual “marriage” (or abortion or racism).

In March, Alliance Defending Freedom (ADF) filed a “pre-enforcement lawsuit” on Lawson’s behalf challenging a Madison “sexual orientation” for “public accommodation” law, which it said could open Lawson up to being sued if she continued to tell potential customers that she would not promote same-sex “marriage.”

At a hearing Tuesday, the Dane County Circuit Court announced that it will issue an order declaring that Lawson and her business are not subject to city and state “sexual orientation” laws affecting “public accommodations” because she does not have a physical storefront:

“The court’s announcement has important implications for everyone in Wisconsin who values artistic freedom. It means that government officials must allow creative professionals without storefronts anywhere in the city and state the freedom to make their own decisions about which ideas they will use their artistic expression to promote,” said ADF senior counsel Jonathan Scruggs.

“The court found — and the city and state have now agreed — that such professionals cannot be punished under public accommodation laws for exercising their artistic freedom because those laws simply don’t apply to them,” Scruggs said, adding, “No one should be threatened with punishment for having views that the government doesn’t favor.”

In educating the public about the Madison law that ADF said could lead to government actions against Lawson, it focused heavily on the possibility of fines and other punishments against those whose conscience cannot abide participating in single-sex “weddings.”

ADF states that, “Since 2006, Madison has investigated at least 11 alleged violations involving sexual orientation or political beliefs, and Wisconsin officials have investigated at least nine businesses accused of not complying with their respective laws based on sexual orientation. Violators of Madison’s law are subject to fines of up to $500 per day as well as liability for civil damages. Those who violate the state law are subject to severe fines of up to $10,000 and business license suspension or revocation, as well as civil damages and punitive damages.”

ADF said the court has not yet issued its final order but is expected to do so in the coming weeks.

The Wisconsin Department of Justice argued in May for dismissing Lawson’s legal complaint, stating, “The State argues that Lawson’s suit should be dismissed, as it is based upon a hypothetical prosecution that would not come to pass.”

The DOJ statement said the Wisconsin Department of Workforce Development, one of the defendants in the ADF lawsuit, has never in more than 30 years applied the state “public accommodation” non-discrimination law to “independent contractors like Lawson who operate out of their own homes and provide their services on location.” Moreover, it said the public accommodation portion of the law “does not apply to anyone who declines to provide services based upon a constitutionally protected religious objection.”