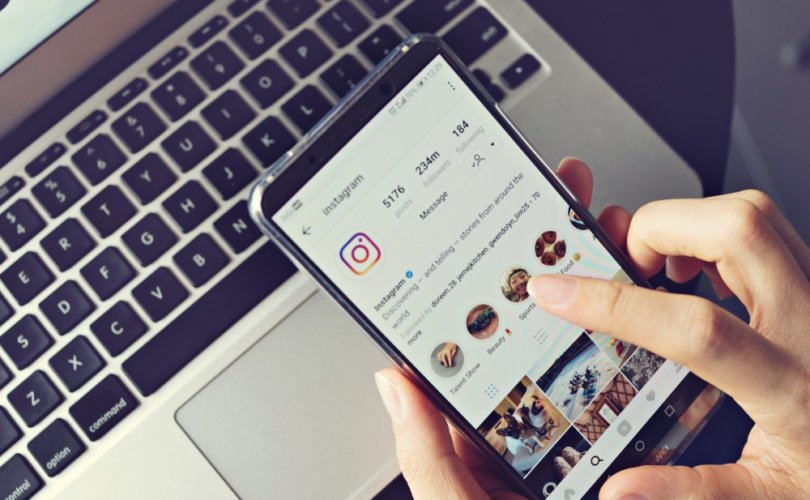 July 1, 2020 (LifeSiteNews) — An American Christian worship leader is accusing Instagram, Twitter, and Facebook of “Big Tech censorship” for allegedly preventing his street ministry videos filmed at peaceful prayer gatherings at protest sites from being shared and viewed among his followers.

Sean Feucht, a California Christian worship leader and activist, took to his Twitter page last week to blast Instagram and other social media companies. He claimed they flagged his YouTube worship videos as “harmful or false information” and for “going against” their “community guidelines.”

“This is what we’ve come to in America! Instagram is now classifying my WORSHIP videos as ‘harmful or false information’ Religious Liberty? Freedom of Speech? Big Tech censorship?” wrote Feucht in a June 23 Twitter message.

The post included a screen grab of a user saying Instagram will not let him share Feucht’s videos from his worship rally as they go “against community guidelines.”

Feucht added on Twitter in another post the same day that his social media feed is “proof” that social media companies promote violence while “actively” censoring “worship.”

“My feed and many others is proof. #ChangeTheNarrative.”

On his Instagram page the same day, Feucht also posted a message blasting the social media platform for its apparent censorship of his videos.

“Never thought I’d see the day where my WORSHIP VIDEOS on Instagram would be deemed ‘harmful & false information.’ MY DMs are flooded with tons of these messages,” wrote Feucht.

“Yet this is where we are in America, where even our worship & prayer (religious liberties) is seen as ‘hate speech’ to Big Tech. GOD GIVE THE CHURCH COURAGE IN THE DAYS TO COME! We’ve never seen a season like this!”

Feucht’s backlash against Instagram is in regard to two YouTube videos of him conducting street ministry at U.S. riot hotspots. One video of him is at a hope rally in St. Louis on June 5, the other in Minneapolis on June 13.

Both cities have been hit hard with violent protests, which were sparked by the death of George Floyd.

A recent Fox News report says Feucht realized that his videos were “being suppressed and they weren't getting the normal traction” after being alerted to the fact by his social media followers.

“But I didn’t know this was the reason until I started getting tagged in people’s posts about it. Other people were finding they couldn’t share it, screenshot it — they couldn’t even view it. So I blew the trumpet on it because this is crazy,” said Feucht in the Fox News report.

Instagram’s privacy and safety center “Community Guidelines” have been the source of contention before. In the past, the social media company has gone after those with pro-life and other socially conservative views.

Republican Sen. Josh Hawley of Missouri came to the defense of Feucht on his Twitter feed last week, calling out Instagram.

“Now @instagram is censoring a Christian worship leader who wants to post videos of praise and worship from places where there has recently been unrest. And that doesn’t meet ‘community standards’? Can’t wait to hear the explanation for this.”

Also raising the alarm concerning Feucht’s alleged video censorship was Donald Trump, Jr., who on June 25 shared on Twitter a link to a CBN report regarding Feucht with the following text: “Wake up America. There’s nothing sacred anymore. There’s nothing the leftists & the social media masters won’t try to censor/destroy to push their narrative.”

“The post in question was re-shared by another account, and we haven’t seen any evidence that it was removed by mistake,” said a Facebook spokesperson to Fox News.

For his part, Feucht posted a “thank you” on his Instagram page to Fox News, along with other news outlets who reported on “blowing this story wide open and exposing the blatant censorship bias of Big Tech.”

“I did not pick this fight, but i’m here. Since this happened, I’ve heard the craziest stories from many of you out there who have experienced this for years! I feel it’s time we push back and stand up against those working to silence the church. I pray this journey breathes boldness and courage to you to stand up. God is moving across America and there’s a story of reconciliation & hope many are trying to hide!”

Hawley recently introduced a bill that would allow people to sue online platforms such as Twitter and Facebook for acting in “bad faith” by selectively censoring political speech or hiding competitors’ content.

In a statement about his bill, Hawley said, “For too long, Big Tech companies like Twitter, Google and Facebook have used their power to silence political speech from conservatives without any recourse for users.”