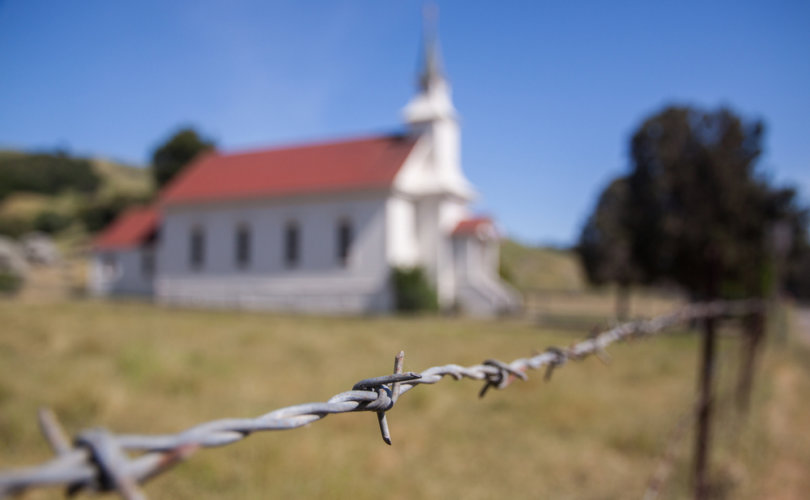 (American Thinker) – Hate crimes against Christianity and its followers in Europe — formerly and for centuries the guardian and disseminator of Christ’s teachings — are at an all-time high.

According to a recent report, at least a quarter of all hate crimes registered in Europe in 2020 were anti-Christian in nature — representing a 70-percent increase in comparison to 2019. Christianity is, furthermore, the religion most targeted in hate crimes, with Judaism at a close second.

Worse, the true number of hate crimes against Christians is likely even higher. As the Nov. 16, 2021 report by the Organization for Security and Co-operation in Europe (OSCE) explains (boldface in original):

Even so and despite this discrepancy, attacks on Christians are still greater than against any other religious group.

Discussing these findings, Madeleine Enzlberger, head of Intolerance and Discrimination against Christians in Europe, said, “The media and politicians do not see the rise in hatred of Christians in Europe as a growing social problem. The OSCE report shows only part of this problem, yet it sends a very clear signal against indifference and the almost fashionable bashing of Christians.”

This can be the destruction of Christian buildings such as churches or schools, but also Christian symbols such as a crucifix or a statue of Mary. It may also involve violent crimes against Christians, such as the attack on Orthodox priest Nikolas Kakavelakis in the French city of Lyon and the murder of Sir David Amess, a conservative Roman Catholic member of the British Parliament. Amess was murdered [by a Muslim youth] in a church during public conversations with his supporters. … The conclusion is that there are more and more anti-Christian hate crimes in Europe, but that the full state of affairs is unknown because not everything is reported to the competent authorities.

The growing number of hate crimes against Christians in Europe is consistent with other reports. Open Doors’ World Watch List, which annually ranks the 50 nations that most persecute Christians for their faith, has been consistently recording ever-growing numbers around the world.

Who is responsible for this dramatic spike in anti-Christian sentiment? Although many groups affiliated with the so-called “left” are increasingly behind these hate crimes — from Antifa and BLM to neo-pagans — the lions’ share still goes to Islam. For every consecutive year, as many as 40 of the 50 worst nations ranked by the World Watch Annual reports have been Islamic.

While European nations rarely if ever make the top 50, it only follows that the more Europe’s Muslim population grows, the more phenomena intrinsic to the Islamic world — from attacks on churches and crosses to the rape and forced conversion of Christian women — will grow with it, based on Islam’s Rule of Numbers.

Nor is this assertion merely deductive or conjectural. European regions with large Muslim migrant populations often see a concomitant rise in attacks on churches and Christian symbols. Consider Germany, where, according to the recent OSCE report, anti-Christian hate crimes have more than doubled since 2019; it too just so happens to have one of the largest Muslim populations of Western Europe — one that has exponentially grown in recent years.

— Article continues below Petition —
PETITION: Stand with Hungary for protecting children from LGBT propaganda
Show Petition Text
44718 have signed the petition.
Let's get to 45000!
Thank you for signing this petition!
Add your signature:
Show Petition Text

Thus, according to a late 2017 German-language report, in the Alps and in Bavaria alone, some 200 churches were attacked and many crosses broken: “Police are currently dealing with church desecrations again and again,” the report relayed, before adding honestly, “The perpetrators are often youthful rioters with a migration background.”

France, another Western nation that holds a significantly large Muslim population — and where two churches are reportedly attacked every single day, some with human feces — is also indicative that where Muslim numbers grow, so do attacks on Christianity, especially cowardly, anonymous ones on churches.

A January 2017 study revealed that “Islamist extremist attacks on Christians” in France rose by 38 percent, going from 273 attacks in 2015 to 376 in 2016; the majority occurred during the Christmas season, and “many of the attacks took place in churches and other places of worship.” (For more on the plight of churches in increasingly Islamizing Europe, see here.)

Of course, just as most hate crimes against Christians are not recorded as such, so too are the identities of those most committing these crimes often left out. Moreover, in a climate where the media do everything possible to conceal the identities of Muslim criminals caught red-handed, surely there will not be a peep to suggest that Muslims might be responsible when the evidence is not concrete.

After all, the “news” is all about maintaining the narrative, one that paints Christians as aggressors and anyone and everyone else as victims — Muslims chief among them.