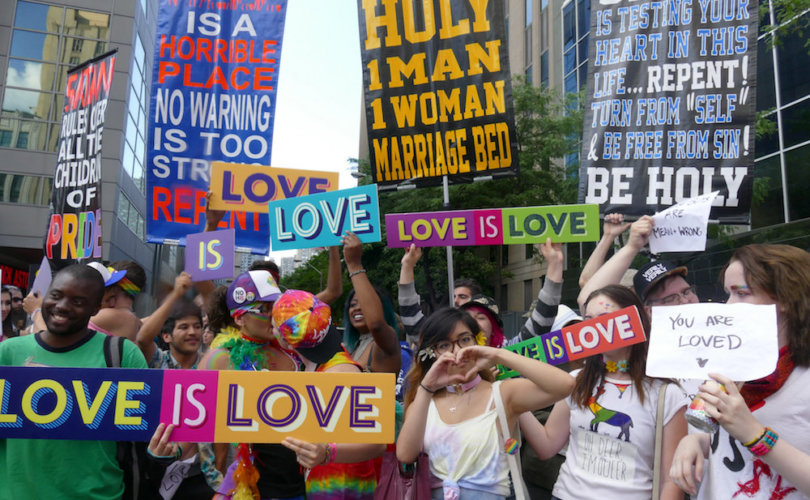 TORONTO, July 6, 2016 (LifeSiteNews) — While one group of enterprising Christians infiltrated Toronto’s Pride Parade on Sunday as “gay zombies” to hand out pamphlets warning of the dangers of homosexuality, another group witnessed the traditional way — and were ridiculed, spat on, and had coffee and ice cream flung at them for their efforts.

But that is all to be expected, noted John, one of five men and a woman who stood on Dundas Street and Victoria Street, just east of Yonge, holding four pole banners with such messages as: “Jesus is testing your heart in this life: Repent! Turn from ‘self’ and be free from sin! BE HOLY!”

“Jesus said, ‘The world will hate you,’ and if we don’t get a reaction, we’re indifferent. We’re not doing much for Christ,” John told LifeSiteNews in a later interview. “When we get a reaction, that’s when we know we’re hitting people right where it hurts — their conscience.”

“And they have two options after that: either sear their conscience and be defensive, or humble themselves,” he added. “So most of the time, the first happens — they become prideful and act out in different ways.”

John, who preferred not give his last name, but described himself as a “young early 20s believer,” says his group is part of a “home church” that is affiliated with a growing “street-preaching network across North America.”

“We’re non-denominational,” he said. “If people ask us, we say we are Bible-believing Christians. … We stick to the Bible as best we can.”

As Sunday’s Pride Parade wound down, the Toronto street preachers were joined by Jesse Rau.

“You need forgiveness, you need a saviour to set you free,” Rau, who has the word “Saved” tattooed in Gothic letters on the inside of his right forearm, told the restive parade-goers who quickly crowded around the Christian evangelists in the late afternoon. “You’re being tested. Wake up.”

Amidst the rising chorus of boos, one man spoke out: “I challenge you sir,” he said. “Two tenets of Christ: love your neighbour as yourself….”

“That’s right, I’m going to love you as a dad loves his child: You’re in trouble, son,” Rau responded, “because you’re going down a path that’s going to destroy you. That’s love.”

The encounter culminated with LGBTQ advocates displaying their own signs, such as “Love is Love,” engaging in same-sex kissing, and a couple of women spitting at members of the group. Shortly afterwards, the sun sinking and the last float passing by, the street missionaries rolled up their banners and departed, as parade-goers jeered and cheered.

“Obviously, we’re not unrealistic. We are trying to change the world, but we know that’s not going to happen,” John told LifeSiteNews. “Even if we turn one soul away from sin and the confusion of the times that we’re in, that’s a victory.”

He says that the street-preaching network has “grown into a culture” with conferences twice a year, and volunteer street evangelists in a number of major cities who show up at any event that draws a sizeable crowd.

His group has been at it in Toronto for about five years, John said.

He himself is “a product of this type of ministry,” John told LifeSiteNews, explaining that he encountered the street evangelists four years ago.

“I was a church-going nominal Christian, lived a double life like everyone else,” John said. “At the same time, I recognized truth. When I saw these two brothers preaching, it really moved me, and that’s when I saw what a true man of faith looked like…This is how I came to the faith, how I turned to Jesus Christ.”

Since then, he’s seen “countless” examples of people coming to Christ through this ministry — as well as the opposite.

“I preach at Yonge and Dundas almost every weekend” with the group, John said. “I’ve been punched before, had a bike thrown at me, little things like that. … I don’t keep track, these things happen all the time, literally all the time, but if we let these things affect us, then people win. We win without violence, we win by standing there.”

Added John: “I believe people of my generation are looking to counter the culture. Unfortunately, they’re countering with further rebellion, with perversion. Some even turn to Islam, because they’re trying to do something different. They see emptiness everywhere, and unfortunately, it’s a cycle of emptiness after emptiness.”

“And I’ve found there’s fullness in Christ,” he said. “So that’s why I do what I do today.”