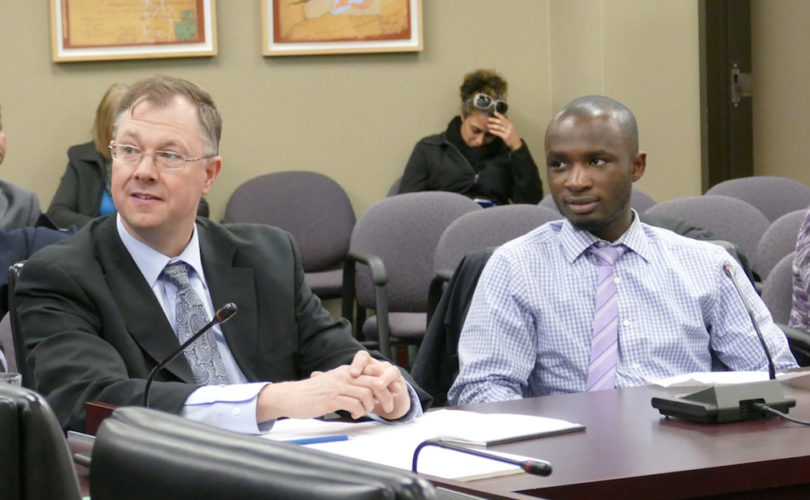 TORONTO, December 11, 2015 (LifeSiteNews) – A Christian organization banned from Yonge-Dundas Square because of alleged proselytizing has been left in limbo until February following its Thursday appeal to the square’s management board.

Voices of the Nations asked the board to repeal events manager Natalie Belman’s October decision to deny the Christian group a permit to use the square for its sixth consecutive summer music festival.

Belman had contended that Christian songs sung during the event violated the board’s policy against proselytizing in the square. “If you’re praising Jesus, ‘praise the Lord,’ and ‘there’s no God like Jehovah,’ that type of thing, that’s proselytizing,” she said in a recorded conversation with VOTN’s Leye Oyelami.

But after hearing statements from Oyelami and VOTN lawyer John Carpay at its December 10 meeting, the board opted to delay its decision until February 4.

Moreover, it asked that VOTN meet with its staff before that time to work out the specific conditions under which the Christian group could be granted a permit.

“I was hoping for a reversal such that Voices of the Nations would get a green light,” Carpay told LifeSiteNews. “It’s a disappointing outcome today.”

They’re also running out of time to finalize plans for their event, with one of the dates they wanted for the festival already booked at the square.

Carpay, president of the Calgary-based Justice Centre for Constitutional Freedoms, told the board that the policy was unclear, and if strictly interpreted, Christmas carols could be banned as proselytizing.

He also noted that VOTN had complied with a 2013 directive from the Yonge-Dundas management board staff to stop preaching during their annual festival.

Board chair Jan Mollenhaure questioned why the conversation between Belman and Oyelami had been recorded. Carpay stated that such a recording was legal and that Belman was a public official.

Both Mollenhaure and board member Michael Major stated their confidence in their staff.

“I believe our staff acted in good faith and without malice,” Major said. “But I do believe the policy is somewhat vague and discretionary and should be reviewed.”

He suggested a meeting between board staff and VOTN to “reconsider the denial of the permit, subject to certain conditions that we agree to.”

“We’re willing to work with Dundas Square, but if they’re going to say that we can’t say the name of Jesus or something because it’s proselytizing,” responded Ruparelia, “then it’s not going to work because our whole event is about Christian songs and Christian beliefs.”

Ruparelia reiterated this after the meeting in a brief media scrum. “That’s one thing I’m not going to do,” he stated. “If they’re going to make us not say the name of Jesus, then it’s not going to work.”

He saw the board’s delay and the requested meeting with staff as evidence of anti-Christian bias. “Other religions are doing events out there. I guarantee you they’re not going to call them in to give them conditions,” Ruparelia said. “We’re a Christian organization and they want conditions.”

Although he is prepared to fight the ban, Ruparelia admitted that “this has been hard on all of us. So we’d prefer them to just reverse it, give us our date, let us do our event, and that will be it.”

“I’m getting to the point where if we have to go somewhere else we will,” Ruparelia added. “At the same time, we can’t let them dictate what’s going to happen to Christians.”

“I’m standing behind my husband and we will go all the way,” Beena Ruparelia said.  “Because we have to fight and we have to declare the name of ‘Jesus’ in the City of Toronto.”

It has now launched its own petition (here) and Ruparelia says there will be more rallies similar to the Stop Bullying Christians protest organized by pastor David Lynn, who was also present at the hearing. “This is clear bigotry towards Christians,” Lynn said.

The Yonge-Dundas Square management board will be reviewing the policy regarding proselytizing as part of a general audit taking place from January and June next year.