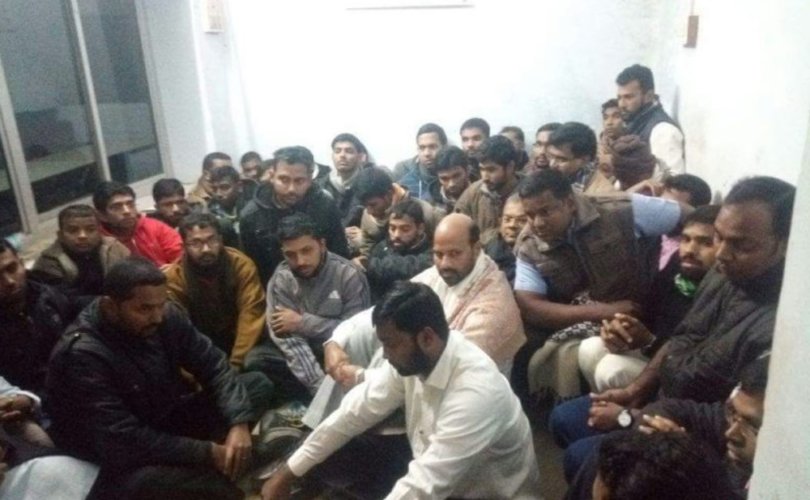 January 5, 2018 (LifeSiteNews) – Hindu extremists beat eight Catholic priests and set their vehicle on fire in a central town of India in mid-December as the priests attempted to help 30 seminarians and two other priests who had been detained and some arrested for singing Christmas carols.

The seminarians from St. Ephrem’s Theological College in Satna went to a local village to sing carols December 14, when an angry mob began shouting against them for alleged conversion activity, the Catholic Herald reports.

Six states in India have strict laws against conversion away from Hinduism.

The violence and seminarians’ arrest preceded a more recent altercation where Hindu nationalists tried to force their way on campus at a Catholic college to perform a Hindu ritual on the premises.

The Catholic Bishops’ Conference of India (CBCI) confirmed the 30 seminarians and two priests from St. Ephrem had been detained when they were carrying out a routine carol-singing program.

Father Maria Stephen, a spokesman for the regional bishops’ council, said this kind of attack raises serious questions about a lack of religious freedom in mostly Hindu India, the Catholic Herald report said.

“One of them called police and demanded action against us,” said Father George Mangalapilly from the Theological College.

A police officer said on condition of anonymity that after the carolers were arrested and charged, they were kept in protective custody because of fears they would be attacked if immediately released.

Father Anish Emmanuel, one of the priests who went to the police station to help the carolers, said that about 100 Hindus attacked them in the police compound.

“We were beaten up in front of the police, but they did nothing,” he said. “They set our vehicle on fire, forcing us to take shelter inside the police station.”

“We were only singing carols, but the hardline Hindus attacked us and said we were on a mission to make India a Christian nation,” Father Emmanuel said in a Reuters report. “That’s not true.”

The carolers were held after a resident of Bhumakahar village, Dharmendra Dohar, charged that he was being forcibly converted to Christianity, according to the independent digital publisher Scroll.in.

Bishop Joseph Kodakallil of the Syro-Malabar Diocese of Satna told ucanews.com that a villager had falsely claimed he’d been offered 5,000 rupees (US$65) to convert to Christianity.

Charges had been filed against six carolers under codes pertaining to “imputations and assertions prejudicial to national-integration” and “outraging religious feelings.” The police said they had filed a case against unidentified individuals for torching the car.

Secretary General for the CBCI Bishop Theodore Mascarenhas rebutted the allegations of forced religious conversions as “frivolous and laughable.” He also accused the police of being complicit during the incident.

Bishop Kodakallil said missionaries in the diocese had been facing hostility for the past two years, the Catholic Herald report said.

Police were called this week when members of the Akhil Bharatiya Vidyarthi Parishad (ABVP) Hindu nationalist student organization argued with administrators at St. Mary’s Post Graduate College, CRUX reports, threatening to force their way into the school to perform a Hindu religious ritual.

The ritual, Bharat Mata Aarti, is to the “mother goddess” deity, and involves burning a special candle and songs of praise. The goddess is the personification of the nation of India.

The clash at the Catholic college took place in the city of Vidisha, in the central state of Madhya Pradesh, near the state capital of Bhopal. The state is over 90 percent Hindu, and less than 1 percent Christian, according to the CRUX report.

“The ABVP youth wing trespassed St. Mary’s Post Graduate College – which is a private, unaided institution – on December 30 and they threatened that they would perform Bharat Mata Aarti forcefully on January 4, 2018,” said Father Maria Stephen, public relations officer for the Catholic Church in Madhya Pradesh.

Father Shaju Devassy, director of St. Mary’s, said the Hindu nationalist group has been inciting local sentiment against the college and that the students were in fear because of the group’s tactics.

“The ABVP members are provoking the people of Vidisha against this institution through social media and other means due to which the reputation of this institution is deformed,” Father Devassy said. “Moreover, we are emotionally harassed. The students of the institution are feeling insecure due to these violent procedures.”

Bishop Anthony Chirayath of the Syro-Malabar Diocese of Sagar, which oversees the college, told CRUX he was “in great anxiety” from the threats by “right wing forces” to hold Hindu worship services in Catholic educational institutions.

“We do not even conduct Mass or any Christian prayers in our College and we will not allow any puja [Hindu ritual] to take place,” he said.

“There is a heavy police deployment around the college,” Bishop Chirayath said. “The local church has also submitted a memorandum to the administration asking for protection and security.”

The president of India’s bishops’ conference condemned the incident at St. Mary’s in Vidisha.

“It is an act of humiliation against the sacred constitution of India,” Cardinal Baselios Cleemis said. “The Indian constitution provides a dignified space and atmosphere for the practice of each one’s beliefs and faiths, and to force a Catholic priest to bow down before a deity, and to compel him to worship another religious faith is a humiliation against our sacred Constitution.”

More than 650 attacks on minority Christians had been reported in India as of the mid-December attack on the priests and seminarians, the Catholic Herald report said.

In 2014, the Indian government declared that December 25 would henceforth be celebrated as “Good Governance Day.” The date, the birthdate of former Prime Minister Atal Bihari Vajpayee, was said to be honoring the former prime minister and foster awareness with the Indian people of accountability in government.

But the decision to observe Good Governance Day on Christmas Day drew criticism as a statement against Christians. Further, rather than being closed to observe Christmas, schools, colleges and government offices now must stay open December 25 to mark the government occasion.