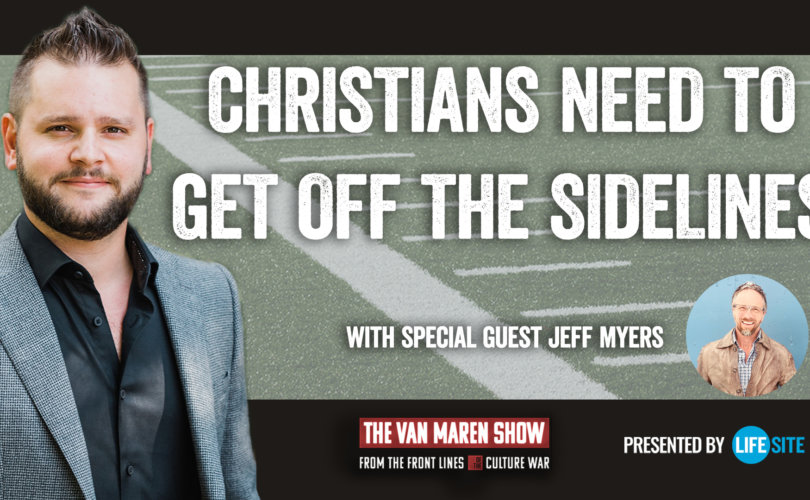 December 2, 2020 (LifeSiteNews) — Jonathon Van Maren is joined this week by Dr. Jeff Myers, President of Summit Ministries, and one of America’s most respected authorities on youth leadership development.

Summit Ministries is a worldview training program for young men and women, educating the next generation on politics, law, academia, medicine, science, and business, all while maintaining a Christian outlook on cultural issues.

Myers discusses an article he wrote last month, titled “Christians Must Demand Justice in Election Crisis,” where he highlights important principles of citizenship which every Christian must support and promote during the current post-election chaos.

In both the article and the podcast, Myers criticizes Christians who believe that their only duty is to vote on Election Day, and afterwards all actions are solely in God’s hands. In reality, he says, “the vote does not get you across the finish line as a citizen, it gets you to the starting line.”

Myers refers to the statement that God is in control not only as “bad citizenship, but it’s also actually bad theology because the Bible doesn’t describe God in that way.”

He describes how the term “control” is not only theologically wrong, but it also “leads people to become bad citizens when it comes to things like figuring out … what are we supposed to do in the world.” Myers applies this directly to the current post-election day battles to investigate and expose election fraud, in which he calls “election justice,” and that “it is about time that we put to rest … what we know is fraud and disenfranchising people.”

He also applies the idea that Christians need to rise up and take citizen action on culture war issues such as abortion and standing up for American freedoms. Dr. Myers states that the “founders of the United States did not imagine that [citizenship] would ever be easy, but they did imagine that that it would require eternal vigilance.”

Myers expressed both worry and alertness for Christian persecution under a possible Biden-Harris administration, saying a persecution would likely be done through the bureaucratic system. “We might be persecuted to death, but it’s because we’re going to be regulated,” he said.

Nevertheless, Myers highlights several ways in which every Christian can take practical measures to make a difference in politics, especially in the local sphere, and it all begins with being well-informed and educated.

Lastly, he shares how his organization Summit Ministry firmly believes “that the word of God speaks to every area of life,” which is why it provides information “from a biblical worldview [on] everything from movie and music reviews to specific issues … facing … the culture.”