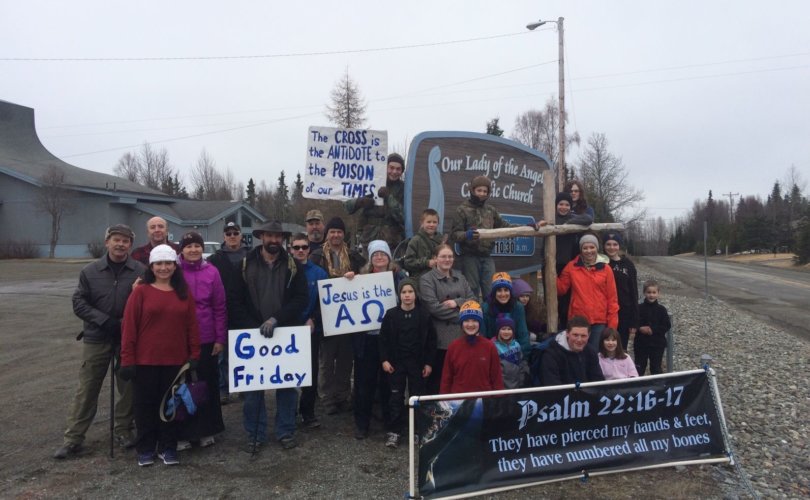 April 18, 2019 (LifeSiteNews) — This Good Friday, thousands of pro-life Christians are expected to attend Way of the Cross observances at abortion facilities in more than 30 U.S. states.

The Pro-Life Action League is set to coordinate another nationwide pro-life vigil on Friday, April 19. The pro-life group has been organizing the “Way of the Cross for Victims of Abortion” nationwide since 2014.

Many people have come to regard this solemn prayer vigil for life as a fundamental part of their annual Holy Week religious observance, the group says.

Pro-Life Action League executive director Eric Scheidler noted how the need persists to recognize the humanity of the unborn, and therefore acknowledge the victims of abortion.

“As a society, we've become increasingly sensitive to the victims of injustice, and that's to our credit,” Scheidler said. “But we forget about the victims of abortion, starting with the more than 60 million unborn children who have lost their lives to legal abortion in the United States since 1973.”

In Aurora, Illinois, near where the Pro-Life Action League is based, the Good Friday service will begin at 10 a.m. and will be led by Diocese of Joliet Catholic Bishop Daniel Conlon.

The Aurora prayer service has been held outside the city’s Planned Parenthood facility since 2008.

More than 300 were present at the Aurora site for the candlelight vigil this past Saturday, held in conjunction with 166 vigils at the abortion giant’s facilities in 40 states.

Organizers considered the national vigil an outstanding success, with an estimated 10,000-plus attending. Many of those were taking part in pro-life activism for the first time.

Hundreds of local Christians, both Catholic and Protestant, are expected to attend the Aurora Good Friday vigil.

Scheidler pointed out how the victims of abortion also include millions of mothers who have come to regret their abortions. This also takes into account former abortion facility staff like Johnson, he said, whose sincere desire to help women with untimely pregnancies was exploited by Planned Parenthood, as depicted in the Unplanned movie.

“There's no better day to remember the victims of abortion than Good Friday,” Scheidler added, “when we remember the suffering and execution of Jesus Christ, an innocent man who preached the value of every single human life.”

Click HERE for U.S. locations where the Way of the Cross for Victims of Abortion 2019 is being held.