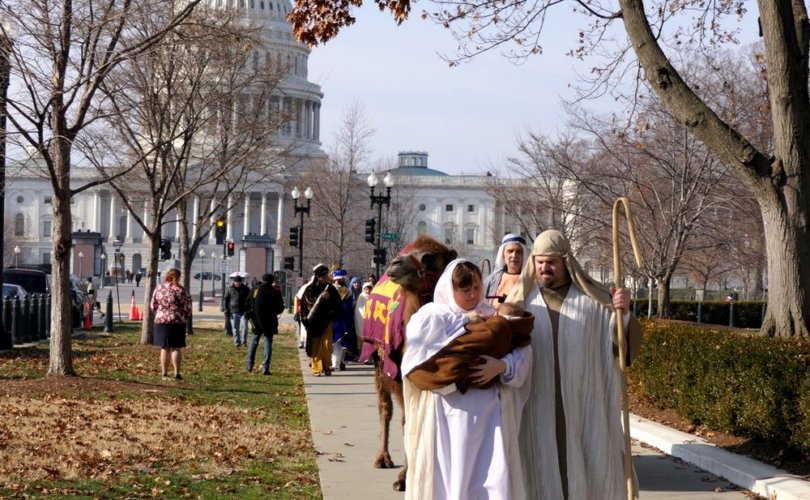 WASHINGTON, D.C., December 13, 2018 (LifeSiteNews) – Christians hosted their 11th annual live nativity, including a camel, donkeys, and sheep, at and around the U.S. Supreme Court on Wednesday to promote religion in the public square and share the true message of Christmas.

“It’s a beautiful physical reminder of the reality of Christmas. And that (reality) is that Christ came to bring us hope and peace and joy,” Rev. Patrick Mahoney of the Christian Defense Coalition told LifeSiteNews. “And to see that here, in the most powerful neighborhood in the world, is such a beautiful witness.”

The Holy Family, three kings, shepherds, townspeople, and their animals began their procession at the offices of Faith and Liberty in the Nation’s Capital (formerly Faith and Action) with prayers, a Christmas carol, and a young angel’s short explanation of the Incarnation. From there, they walked to the front of the Supreme Court and sang “O Holy Night.”

Faith and Liberty’s office is directly behind the Supreme Court.

The procession circled around the Court and ended in front of Faith and Liberty, where the Baby Jesus was placed in a manger and participants prayed and sang “Joy to the World.”

“I teared up last time, I teared up this time,” Brandon Vaught, who played Joseph, told LifeSiteNews. His wife, Charlie, was the Virgin Mary. Their six-month-old son, Brooks Noel, was Jesus and their daughter, Chandler, who is 3 1/2, was a townschild. The couple was the Holy Family at this live nativity once before, when Chandler was the baby Jesus.

“Back when we did it the first time, I didn’t really have a relationship with Jesus,” Brandon explained. Now he does, which “makes it that much more important to me.”

Acting in the live nativity “makes you remember what everything’s about,” Charlie said.

The live nativity outside the Supreme Court is also meant to serve as an inspiration to people around the country who want to erect manger scenes in their towns.

“If we can do it here in the nation’s capital with all the different hoops you have to jump through, then I encourage people across the country to think outside of the box, to figure out some way in their own community, in their church, to remind people about this reason for Jesus Christ and His birth,” Mat Staver, chairman of Liberty Counsel, told LifeSiteNews.

Those hoops are not small, Peggy Nienaber, vice president of Faith and Liberty and one of the event’s main organizers, told LifeSiteNews. Planning for the live nativity begins in July. Many permits are required, from “DDOT [District Department of Transportation] to Department of Health to Capitol Hill police, metropolitan police, Supreme Court jurisdiction – so there’s a lot of many different avenues, even the mayor with special events. Everybody has to know what’s on board because different parts of the street and different parts of the sidewalk belong to different jurisdictions.”

“We started off with plastic figurines” 11 years ago, she recalled. Then “I decided to move it up a little bit.”

In addition to going from plastic figurines to real people, the group has gone from using just one camel to using several animals.

“We have folks coming from all different states that actually volunteer for us,” Nienaber said. “They ask well in advance.”

“Christmas can get really busy for people,” she concluded. “It’s all about presents, it’s all about Santa, and it’s all about the shopping, and what’s the best gift – I think sometimes we need to take a step back and find out what’s in our heart and realize the true meaning” of the holiday. “The most important thing this time of the year” is celebrating Christ’s birth.

“There are definitely threats to our religious freedom” in the United States right now, Staver warned. He mentioned that Liberty Counsel was recently successful in overturning an elementary school principal’s ban on Christmas decorations, the colors red and green, and even candy canes.

“We have threats like that around the country,” he said. “We need to exercise our liberties; otherwise, we’ll lose them.”

Mahoney noted, “The First Amendment promises freedom of religion, not freedom from religion. And our position is clear: If you can celebrate a live nativity in front of the United States Supreme Court and the United States Capitol building – arguably the two most powerful buildings in America – then certainly in your town of Toledo, Ohio, or Middletown, Connecticut, or Palm Beach, Florida, you can exercise your constitutional rights.”