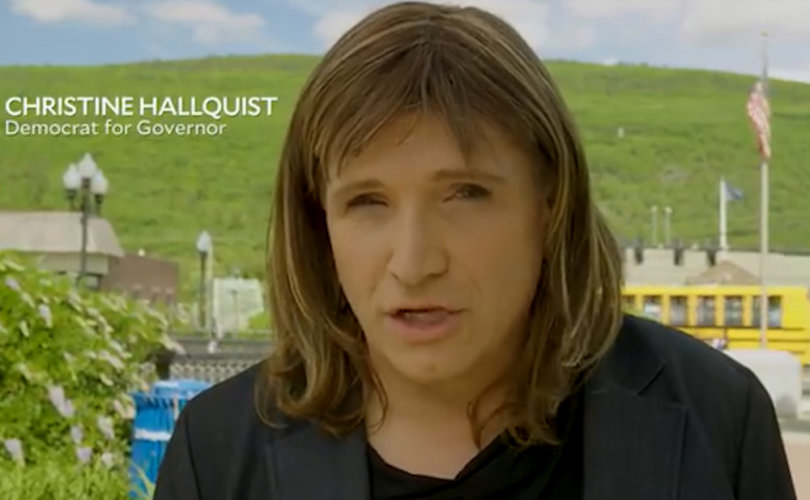 Hallquist, the former CEO of Vermont Electric Cooperative, won 48 percent of the vote against three other Democrats and will face incumbent Republican Gov. Phil Scott in November. His campaign website touts both expertise in manufacturing and renewable energy as well as an array of left-wing stances, including legal abortion and a vague commitment to making Vermont communities “welcoming” to “historically marginalized groups.”

But the detail that has given Hallquist national prominence is the fact that he identifies as a woman, despite being biologically male. According to the Burlington Free Press, the 62-year-old nominee is married with three children and two grandchildren, and “transitioned to living as a woman” in 2015.

“I am so proud to be the face of the Democrats tonight,” Hallquist told supporters at a victory party Tuesday night.

“Christine’s victory is a defining moment in the movement for trans equality and is especially remarkable given how few out trans elected officials there are at any level of government,” LGBTQ Victory Fund president Houston Mayor Annise Parker declared. Hallquist is one of four LGBT candidates running in gubernatorial races this year, all of whom are Democrats.

“I didn't necessarily think about what it would look like to win, but it is starting to sink in, the historic significance of this nationwide,” Hallquist told CNN on Wednesday morning, adding that he is “proud and honored to be making history for the nation.”

In that interview, Hallquist also claimed not to be certain “what socialism is,” admitting he did not “have the background to answer that question.”

After Hallquist's victory, the Daily Caller highlighted a sampling of past tweets in which he displays hostility toward Christianity, equating “radicalized Christians” to practitioners of Sharia law and speculating that the perpetrators in multiple news stories about anti-LGBT violence or harassment “call themselves Christians.”

Hallquist also said some Christian evangelists were “just downright crazy,” seemingly unaware that the Babylon Bee article he had linked to was satire rather than an actual event.

Some of these Christian evangelist’s are just downright crazy https://t.co/hCqYdvEpZY

In response to Hallquist’s victory, the Republican Governors Association released a statement sidestepping his transgenderism and “progressive” stances on social issues, instead criticizing him solely on tax policy.

RealClearPolitics currently predicts that the Vermont governorship will “likely” remain in GOP hands. Scott is a liberal Republican who has said he generally supports legal abortion, and in 2009 voted in favor of same-sex “marriage” as a member of the state legislature.