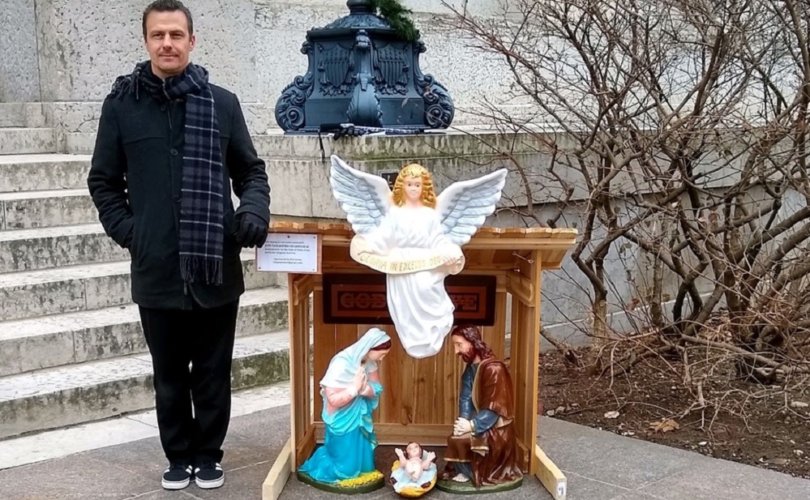 Nativity set at the Ohio statehouse, featuring Rick Jones, who assembled the display.

CHICAGO, December 20, 2019 (LifeSiteNews) — This Christmas season, over half of America’s state capitols will showcase the Baby Jesus as nativity scenes take center stage during the Christian holiday. Throughout the month, Christmas crèches celebrate the Savior’s birth in conspicuous places on state property with the approval of 27 state governments.

The Thomas More Society, a national not-for-profit law firm, has teamed up again with the American Nativity Scene to help keep privately funded manger scenes in the public square for Christmas.

“This is a landmark year as we have crossed the half-way mark. More than 50 percent of our nation’s state capitols will feature Christ — the very reason for Christmas. It is an exciting opportunity to share our Christmas message with the public, as the Constitution allows us to do,” stated Thomas Olp, vice president and senior counsel at the Thomas More Society.

“By leveraging this beloved holiday, we provide an invitation to everyone to seek peace on earth and goodwill to all,” added Ed O’Malley, president of the American Nativity Scene. He noted that each state capitol display celebrates the manger scene uniquely, but most incorporate celebrations with Christmas carols, prayers, and public figures speaking to mark the occasion.

The Thomas More Society serves as legal counsel for, and collaborates with, the American Nativity Scene in placing and, when necessary, defending the placement of nativity scenes in public places all across America. Defending freedom of religious speech and the free exercise of religious faith in the public square, these pro bono attorneys assist nativity scene sponsors. They equip citizens with the knowledge and support they need to successfully display crèches in venues that qualify as an open public forum.

“Privately funded Christmas displays are legally allowed in a traditional public forum such as a state capitol, county complex, or city hall lawn,” explained O’Malley. The public agrees with him. A Washington Times poll reported that an overwhelming majority, 72% of those surveyed, agree with the inclusion of privately funded religious scenes on public property.

“We are committed to our goal of keeping Christ in Christmas across the nation,” declared O’Malley.

The mission of the American Nativity Scene is to place a nativity display within or directly outside state capitol buildings across America.

O’Malley observed that this season’s increase was dramatic. “We welcomed six new state capitol nativity scenes this Christmas, with manger displays debuting in Florida, Hawaii, Minnesota, North Dakota, Ohio and South Carolina. That’s the largest number we’ve added in any year since we launched this initiative in 2012.”

About the Thomas More Society

The Thomas More Society is a national not-for-profit law firm dedicated to restoring respect in law for life, family, and religious liberty. Headquartered in Chicago and Omaha, the Thomas More Society fosters support for these causes by providing high quality pro bono legal services from local trial courts all the way up to the United States Supreme Court. For more information, visit thomasmoresociety.org.

About the American Nativity Scene

The American Nativity Scene is dedicated to the display of nativity scenes in every state capitol throughout the United States during the Christmas season. For more information, visit americannativityscene.com.