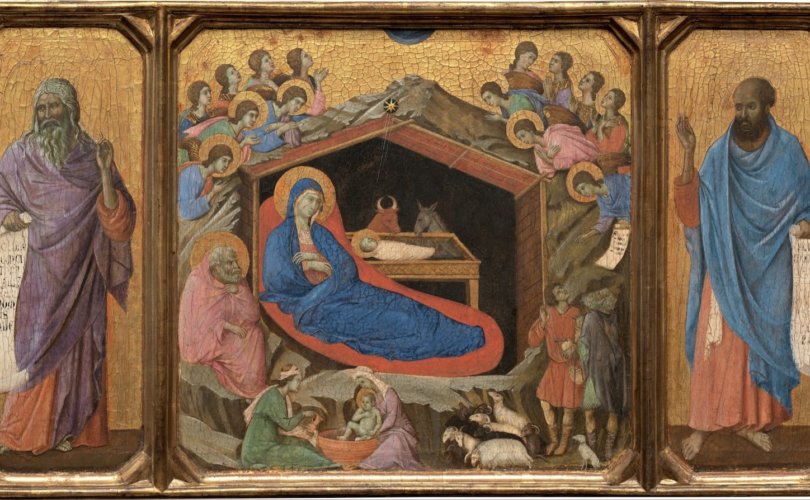 (LifeSiteNews) — This might at first seem an unusual Christmas offering, but at its deepest level, this is what Christmas means to me:

There are many kinds of kisses recounted in the Bible. There is the kiss of greeting offered to brothers and honored visitors (Exodus 4:27, 18:7, 1Thessalonians 5:26). There is the kiss of the feet that the penitent woman gave to Jesus after she bathed his feet with her tears and before she anointed him with precious oil (Luke 7:38). There is the kiss of reunion with which the prodigal son’s father welcomed him back (Luke 15:20) and which Joseph shared with his brothers (Genesis 45:15). There is also the tearful kiss of farewell between brothers (Acts 20:37-38).

But the kiss of the Song of Songs (1:2) – “Let him kiss me with the kisses of his mouth” – surpasses all of these. It is the kiss of supreme intimacy between God and man (Psalm 85:10-11). It is the kind of kiss that is possible only between two who are alike in nature but different. They are defined by complementarity. They are made for each other and are incomplete until they are joined together in this kiss.

This kiss is not possible between two men or two women, no matter how close their bond of love might be.

It is a kiss that is conceivable only between two who have been bonded so closely together that “they become one flesh,” (Genesis 2:24), whose unity miraculously forms a single life-producing organism, reflecting the magnificence of God because, like Him, their union can produce new life. It is reserved for two who are joined together in an irrevocable covenant of which Jesus said, “Therefore what God has joined together, let no one separate,” (Matthew 19:6).

This extraordinary kiss shows us that complementarity is not just an academic construct of social science or tradition.

Complementarity goes to the heart of our humanity, as both physical and spiritual beings.

Complementarity is not something that is incidental to our lives, or that can be dismissed as good for some but optional for others.

Complementarity defines the origin and existence of family life on earth and defines humanity’s ultimate relationship with God in eternity.

The Incarnation – Christ, the Second Person of the Trinity becoming man – is the most tender kiss conceivable between God and humanity and throughout the entire universe: He entered time and space, a babe born from Mary’s womb, that we might all one day be born again and share in His Divinity. He became like us, that we might become like him.

God’s love for and devotion to us are staggering; His pursuit of each of us is beyond understanding. His desire for our love is incomprehensible.

The analogy of spousal love permits us to understand in a certain way the mystery which for ages was hidden in God, and which in turn was realized by Christ, as a love proper to a total and irrevocable gift of self on the part of God to man in Christ.

[T]here is constituted a primordial sacrament, understood as a sign which effectively transmits in the visible world the invisible mystery hidden from eternity in God. This is the mystery of truth and love, the mystery of the divine life in which man really shares …

Can we not perhaps deduce that marriage has remained the platform for the actuation of God’s eternal designs … ?

The creation of Eve from Adam’s side as he slept – from his wounded side – recounted in Genesis, and the wounding of Jesus’ side at the climax of His Crucifixion – the piercing of His side as he now ‘slept’ on the Cross – are events that display the same massive primordial truth that, like Christ himself, “is the same yesterday, today and forever” (Hebrews 13:8). Before Creation, the Heart of the Second Person of the Trinity was wounded with love, seeking, yearning for his complement.

And as Eve was made for Adam, the Church is Christ’s perfect complement.

In the telling of the story of creation in Genesis chapter one, we are told no less than seven times “And God saw that it was good.” That’s why it is so startling that, “The Lord God said, ‘It is not good for the man to be alone. I will make a suitable helper for him.” (Genesis 2:18)

Complementarity – the observable, undeniable truth that man and woman are made for each other – has never been incidental to God’s eternal plan: It is central, revealing the intentions of the heart of the Second Person of the Trinity.

In fact, the existence of complementarity informs us of God’s spousal love for His people. This is the magnificent truth that the evil one seeks to extinguish through same-sex marriage, supplanting it with a lie, obscuring it, so as to turn God’s people away from the one for whom they were perfectly created.

God had cast a deep sleep upon Adam, opened his side, and removed a rib from which he formed Eve for Adam.

As he shook off his slumber, Adam opened his eyes and his heart leapt for pure joy. He spied the one created for him, from him, and exclaimed, “This at last is bone of my bones and flesh of my flesh!”

Adam, filled to the brim with wonder, enchanted, smitten; his mind clear, unencumbered by sin, utterly free from guile and duplicity, could observe, think, feel, and express himself more deeply than any of his descendants:

You have stolen my heart, my sister, my bride.

You have ravished my heart with but one  glance of your eyes!

How much more pleasing is your love than wine,

and the fragrance of your perfume than any spice!

Your lips drop sweetness as the honeycomb, my bride;

milk and honey are under your tongue.

You are a garden locked up, my sister, my bride;

you are a spring enclosed, a sealed fountain.

The new Adam, Jesus, was put to death on a cross on Calvary, and as He slept, suspended between heaven and earth on that cross, a soldier pierced His side. Blood and water rushed out. This was the moment the Church on Earth was born.

He who was slain, whose side was opened, was more than Jesus of Nazareth. He is the Lamb slain from the foundation of the world – in eternity before creation.

His heart was wounded with love as it burst forth with creation, marking the beginning of time and space.

As Adam dwelt in the perfection of the Garden of Eden, the Second Person of the Trinity knew only perfection in Eternity, yet he longed for a companion, one like Him, made for Him and from Him, one who would fill up what was lacking in perfection for Him who sought to expand His Love. One who would be His perfect complement.

Jesus, the Christ, rose on the third day, and ascended into heaven with His eternally wounded side, and sent His Holy Spirit on the Day of Pentecost.

The soldier with his spear played a role in demonstrating the deepest truth about the Second Person of the Trinity: The Church was born in that moment, just as creation had come to be at the dawn of time.

Jesus, the Lover, gazes at His Church, His Beloved, in Eternity. Jesus, the New Adam, looks at Her, and His heart leaps for joy,

For the Wedding of the Lamb has come,

And His Bride has made herself  ready.

And, like Adam smitten with Eve, He says to her:

How beautiful you are, my darling! Oh how  beautiful!

You have stolen my heart, my sister, my bride.

You have ravished my heart with but one glance of your eyes!

How much more pleasing is your love than

and the fragrance of your perfume than any spice!

Your lips drop sweetness as the honeycomb, my bride;

milk and honey are under your tongue.

You are a garden locked up, my sister, my bride;

you are a spring enclosed, a sealed  fountain.

in righteousness and justice, love and compassion;

I will betroth you to me in faithfulness

and you will know the Lord.

Our own marriages, too, are an echo of the primordial sacrament, a manifestation of God’s betrothal to humanity, His spousal love for us, through which God breaks through into our lives, and we come as close as we ever will to Heaven on earth.

Having professed our wedding vows, we are all undeservedly in awesome company: Adam and Eve; Joseph and Mary; Christ and His Bride, the Church. Chances are that your marriage occupies a much higher place of honor than what you normally accord it.

No matter the current condition of your marriage, treasure it and cherish your spouse. Your marriage is a great gift from God.

When a man and woman turn to one another in a bond of faithfulness, God robes them in garments of light, and we come as close as we will ever get to God himself, bringing new life into being, turning the prose of biology into the poetry of the human spirit, redeeming the darkness of the world by the radiance of love.

Excerpted and adapted from an unpublished manuscript, Same-sex Marriage Versus the Real Thing