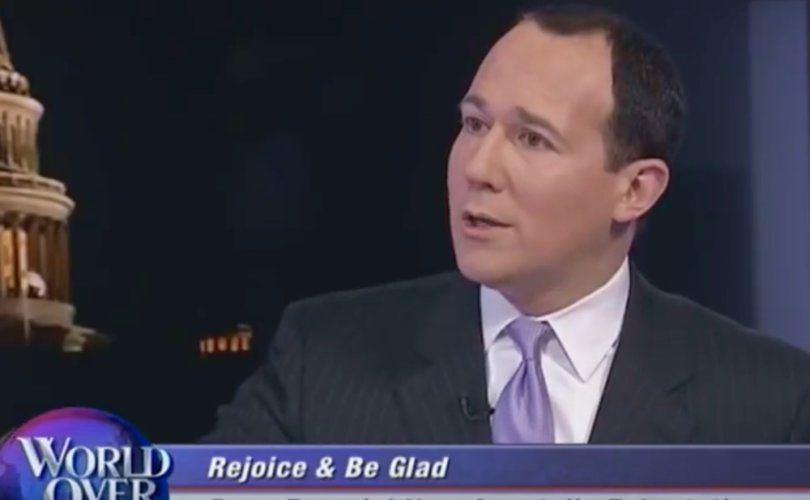 The Vatican removed McCarrick from public ministry several weeks ago and then from the College of Cardinals, due to credible reports of decades of predatory sexual behavior toward young seminarians and boys.  Substantial sums of money were paid to victims in order to secure their silence.  Meanwhile, bishops and cardinals who were former close colleagues of McCarrick have denied all knowledge of his illicit activities, raising questions both about cover ups and a lack of fraternity among our bishops in the United States.

“This is very, very troubling because it shows that the secrecy and the power and the wealth of the Catholic Church were being used to basically keep an immoral man in a position of power,” said Fr. Murray.  “Having done these things, he should’ve resigned in shame.  He should not have stayed in power, and yet after he left [as] the Archbishop of Washington he continued traveling the world as a representative of the Church.  Very troubling.  Lots of questions need to be answered.”

Sexual abuse by prelates is not confined to the U.S.  Bishops in Austria, Chile, Honduras, and Italy recently have been under investigation for similar scandalous homosexual abuse of younger Catholic males.

“The Church, at some point, is going to have to do public penance for this,” said Robert Royal.  “If it were up to me, instead of having a World Meeting on Families in Ireland,” later this month, “I would have a public procession of penitents for sexual sin committed against minors and against seminarians and others around the world.”

“I think the spectacle of a Cardinal of the Catholic Church being revealed to be a child molester was just stunning,” said Fr. Murray.  And what then came out subsequently that three dioceses in New Jersey had paid off secretly two adults who were also abused by ex-Cardinal McCarrick that those payoffs amounting to $180,000 were made on behalf of the sitting archbishop of Washington at the time.”

“Now Cardinal Wuerl has said the archdiocese was never informed of these payouts so basically what we have is behind the scenes secret machinations,” continued Murray.  “There were confidentiality agreements demanded of the victims.  All of this type of stuff was supposed to end after 2002 when the Boston scandal led to the Dallas Charter.  We’re not supposed to be protecting powerful people with the parishioners’ money, paying off people and silencing them.”

“We look like an institution that cannot manage its own house,” he added.

Stop allowing bishops to exempt themselves

“What we’re seeing here, now, is that the same rules that have been applied to priests need to be applied to bishops who either covered up abuse by those that were under their authority, or themselves, as in the case of McCarrick committed abuses,” said Royal.

“Laicization is important, [they should] pay reparations, that would be only just under the circumstances, but I would go even further,” continued Royal.  “I think that like priests who get caught doing what they shouldn’t do, bishops, archbishops, cardinals who are … discovered to have committed what are crimes should all be referred to secular authorities.”

“Otherwise it appears we’re not really serious,” he added.

Time for a Tribunal

The Holy Father “should appoint a tribunal, meaning a judge or a panel of judges, as a special tribunal for the United States, with full authority to look at every document in every chancery and every religious congregation house, regarding sexual abuse and financial irregularities associated with it,” said Fr. Murray.

“Bishops should be compelled by this authority to answer the questions of hired experts,” he said.  “In other words, the tribunal should basically put the work of investigating and coming up with information in the hands of competent people––that means private investigators, lawyers, all the rest.  They can compile the documentation, and the judges should have the power to make decisions.”

“And this should all be made public in the sense that their findings should not be ‘kept in the closet, and the Pope will decide well maybe, maybe not,’” Murray added. “ No!  If someone is found guilty of using Church money to cover up the sexual crimes of bishops or clergy, they should be out.”

McCarrick needs to do penance

McCarrick “should have never accepted being a bishop or a cardinal,” asserted Murray, yet, “he went ahead and did this in a reckless manner which disposes the Church now to this opprobrium, all to satisfy his lust, his power.  It’s a horrible thing.  He needs to do penance.  It’s not enough for him to resign from the College of Cardinals.  He should tell the Pope he’s sorry.  He should resign from the priesthood, he should turn over every dime he has in the bank to the victims.  He should repay those dioceses.  I mean, his soul is important.  I want him to go to heaven, but he has to display real repentance.”

Other priests and religious are “horrified”

“The good people of the Church and the rest of Americans following this story need to know that most priests, most religious, most sisters, have nothing to do with these crimes,” said Fr. Murray.  “They are horrified by it.  The Catholic Church in the United States is not made of a cabal of criminals.  They are a small group of people doing it.  They have a lot of power unfortunately.  But, we need to support our good priests, nuns and brothers by praying for them.”

“In 2002, the bishops said they were going to clean up the mess,” continued Murray.  “Well, they didn’t.  So now the bishops have to say, ‘This mess is going to be cleaned up by someone else, and we’re going to cooperate with them.’”