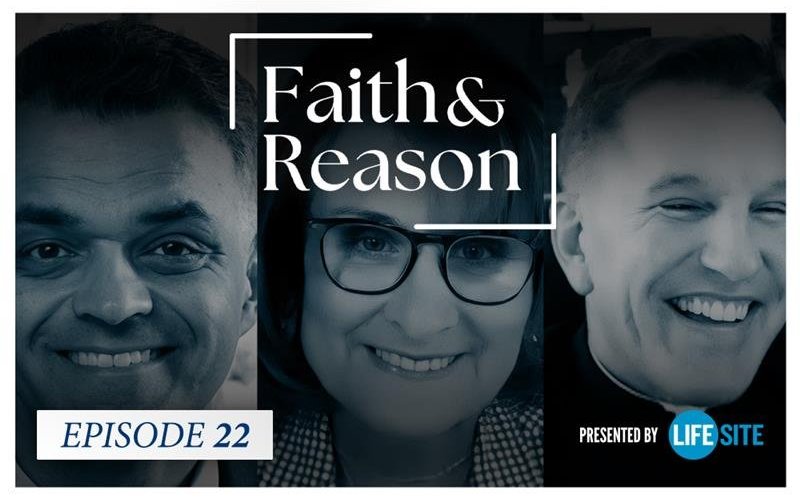 (LifeSiteNews) — On this week’s Faith & Reason, the panel – except a traveling Jack Maxey – deals with Cardinal Blase Cupich’s new attack on the Traditional Latin Mass in Chicago and Pope Francis’ upcoming visit to Canada, where he will participate in an Indigenous “purification” ceremony.

Liz Yore, asked to introduce the topic of Cardinal Cupich’s imminent suspension of the priests belonging to the Institute of Christ the King, gives an excellent overview of the situation not only in Chicago but also the pope’s final goal of shutting down all Latin Mass communities.

For Father James Altman, this suppression of the Latin Mass and traditional rite sacraments puts “eternal souls at risk,” and therefore one does not have to obey. What Cupich is doing is “disobedience to Almighty God.”

For Liz Yore, the Latin Mass is being suppressed in the name of “unity,” but this same concept is used in order to maintain an agreement between the Vatican and an “atheistic, cruel” China, which in the end means the Church is following the “dictates” of the Communist Party.

And what happened in the end? “The underground church went deeper into underground,” the Catholic lawyer explains. Faithful Catholics were “arrested, disappeared, tortured, imprisoned.”

John-Henry Westen points out that while the Mass of all ages is being attacked, at the same time the Church leaders are “allowing the buffoonery going on,” from the “bubbles ceremony” at a Mass, to a priest “blessing” the congregation with a guitar.

Yore adds that the Latin Mass is a “means to bring grace into the world,” and Father Altman stresses the importance of the priest’s reverence during Holy Mass, just as “Our Lady treated Our Lord when she received Him in her arms from the Cross.” The Latin Mass helps priests maintain that reverence. In Father’s eyes, a “proper bishop” would “instantaneously” correct the misconduct of priests on the altar, because “we believe in the Real Presence” and act accordingly.

Liz Yore makes the important reference to the upcoming event in Abu Dhabi where religious indifferentism will be promoted. Her “working theory” is the following:

In September of 2022, the pope and many of the world leaders are going to unveil the Abrahamic Faith Center. This is the part of the Abu Dhabi Declaration that said that God willed the all religions and all religions are the same. And in this center of this campus, there is the synagogue, the church and a mosque. This is going to be the melding of all the religions into the one world religion. And you cannot have a one world religion when you have the Latin mass, which elevates Christ as king.

The panel also discusses Pope Francis’ upcoming visit to Canada and the announcement that he will participate in a pagan “smudging” ceremony. John-Henry Westen presents to the audience a video of a native Canadian explaining this pagan ceremony, which “connects us with our spirit, our creator.”

“And in smudging, we have four sacred medicines. We have sage, sweetgrass, tobacco and cedar,” the man explains. In this ceremony, they smudge the people with an eagle feather, they smudge their eyes, hair, ears, feet, so that they can “walk on this Mother Earth with great respect.” Using the smoke of these herbs, they cleanse their homes “of any negative energy.” So it is an “act of burning sacred medicines that can help to purify and redirect the energy in your face.”

Liz Yore comments on this ceremony: “This is the Amazon Synod gone to Canada. As far as I’m concerned, this is nothing but Gaia worship. This is the Mother Earth worship of the environmental movement, and what they do is they sacralize Mother Earth and divinize Mother Earth, and man becomes just submissive and subservient to Mother Earth. There’s no mention of Jesus Christ, of course.”

But, as always, Faith & Reason ends with encouragement. Father Altman reminds us that “our time on earth is a short journey.” He calls upon us to “keep the faith no matter what.”

“And we keep the faith in the Holy Eucharist and find a priest who does celebrate the Mass reverently,” he says.