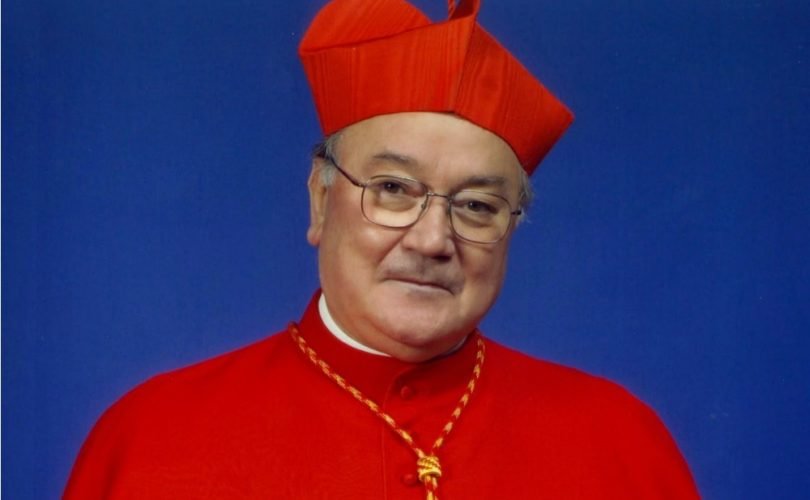 In a lengthy interview in an Italian Catholic paper, a former Vatican ambassador to the UN has said that any change to the Catholic doctrines surrounding marriage and sexuality is impossible. Cardinal Renato Martino has joined an impressive list of high-ranking prelates to say that the Synod cannot alter Catholic doctrine.

The cardinal told La Nuova Bussola Quotidiana there will “certainly” be presentations from bishops at the Synod “that do not correspond with the doctrine of the Church, but in the end, it will not be able but to reaffirm what the Church has always said about the family.”

“The Church cannot change what it has always proclaimed,” said Martino, a veteran of many battles to defend the unborn and the natural family at the international level.

“I believe that the Synod will be an opportunity to throw down the challenge – the Church’s traditional teaching on the family will be made clear,” the cardinal said.

He said he is “tranquil” as to the outcome of the Synod, which normally results in an apostolic exhortation, written in the name of the pope, but expressing the opinion of the assembled bishops.

A meeting of cardinals in February sparked an ongoing uproar throughout the Church when Cardinal Walter Kasper, who had been hand picked by Pope Francis to present the keynote address, suggested a “solution” for Catholics who are divorced and civilly remarried, to allow them to return to the reception of Communion without changing their lifestyles.

The Church, however, has always taught, in keeping with the words of Jesus in the Gospel, that marriage is a permanent state that can only be dissolved by the death of one of the spouses. A civilly remarried person is, in the eyes of the Church, in a state of mortal sin as an adulterer, and cannot receive Communion until he has repented and received the sacrament of reconciliation. The suggestion has since been furiously denounced by leading prelates as impossible and a “solution” that would be disastrous for both the Church and for the spiritual state of the Catholics involved.

Martino affirmed that he knows the pope well, saying, “I believe that Francis is a lot like John Paul II, in faithfulness to the Church’s teaching. For Francis, the family is fundamental too. Moreover, a Pope cannot do new things, never before heard of. It is only the style that changes, but the doctrine is what it is and the pope must proclaim it.”

Catholic teaching and Catholic practice are two different matters, however, and some are expressing concerns that a de facto change could be achieved simply by attrition. Patrick Archbold, a Catholic blogger and columnist for the National Catholic Register, warned that the application of the teaching is likely to be left in the hands of the very bishops and national conferences who have been agitating for change.

Archbold expressed fears, coming from many quarters, that the Synod could easily be a replay of the debacle over the Church’s teaching on contraception. In 1968, Pope Paul VI clearly laid out the doctrine on birth control in the encyclical Humanae Vitae, but it was ignored and undermined in practice by bishops at the local level for the next five decades, with the pulpits remaining silent as the Sexual Revolution charged forward.

Archbold writes at his blog, Creative Minority Report, “When introducing doctrine-undermining change into the Church, the last thing you want is to be clear that is what you are doing.”

Instead of any explicit departure from the Church’s teaching, he said he expects a document that will “include language about the pastoral care of souls in troubled situations, but it will be generally orthodox.”

“But at some point…they will recommend the Bishops conferences to study and implement pastoral guidelines to help those in this situation.” These are the same bishops conferences, he said, who have made laxity in teaching on sexual morals the norm throughout the Church.

He expects, “No mandate, no direct assertions on what to do, but just a call for Bishop conferences to study the problem and implement pastoral practices in line with the synodal documents. That is when the horse will be permanently out of the barn.”