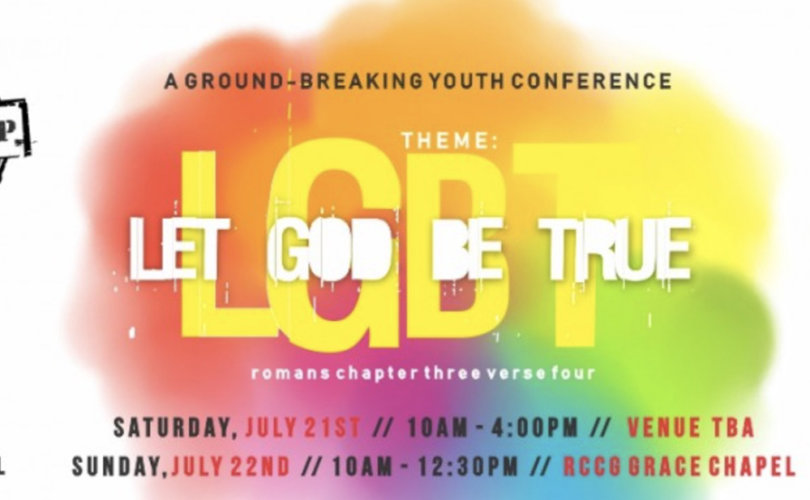 NEW WESTMINSTER, B.C., July 13, 2018 (LifeSiteNews) — A Christian church is threatening to sue a west-coast Canadian city for cancelling its rental of a municipal center for a teen conference on Biblical views of sexuality and identity.

The Get-A-Grip 2018 conference in New Westminster is on the theme of “LGBT” — only in this case, the acronym stands for “Let God Be True.”

Grace Chapel, a congregation of the BC Redeemed Christian Church, signed a contract in May to book space in Anvil Centre for the July 21 event, the Justice Center for Constitutional Freedoms reported this week.

One of the speakers is Kari Simpson, controversial and well-known free speech and parental rights’ advocate, sex-ed critic and executive director of Culture Guard.

Most recently, Simpson has become an outspoken opponent of Sexual Orientation and Gender Identity, or SOGI 123 — the pro-gender identity curriculum rolled out across BC last September.

Anvil Centre, owned and operated by the municipality of New Westminster, cited Simpson as a factor when it sent Grace Chapel an email in June reneging on the contract, JCCF reported.

The government-operated Anvil Center is “constitutionally prohibited from restricting expression on its premises, religious or otherwise, on the basis of the content of the expression,” JCCF lawyer James Kitchen wrote.

Moreover, Hughes did not say how including Simpson at the conference caused Grace Chapel to “promote racism, hate, violence, censorship, crime or other unethical pursuits,” he observed.

“It is not against the public interest to hold and express diverse views regarding sexuality.”

The letter asserted Anvil Centre’s cancellation of the Christian youth event was “unlawful,” and asked it to reverse the decision by July 11.

With that date come and gone and no response forthcoming — and the youth conference just a week away — JCCF is consulting with clients on the next step.

Simpson suggested to CTV News that a “group of plotters” pressured the centre to cancel.

“This is getting totally out of control, the lies, the misconceptions about what’s transpiring. And at the end of the day, parents have a right to know what's going on in the public education system,” she said.

While the decision was “primarily based on our policies,” she said, “we did receive an email as well,” and “we saw some social media activity around our event which prompted us to do some further investigating and looking into the matter.”

Hughes told CTV News that the facility’s licence agreement permits it to cancel events that are “in the reasonable opinion of the Anvil Center immoral or improper or may cause public disorder in or near the premises.”

The city supports SOGI 123 and the “LGBTQ community,” she added.

“It sort of came to light what the event was actually about, and it’s clearly not in alignment with the City of New Westminster’s mission,” said Hughes.

Vocal critic of the conference, Colin McKenna, a member of PFlag Vancouver, sent a letter protesting the conference to Simon Fraser Student Society, which appears on the original conference poster as a sponsor, 1130 News reported.

McKenna zeroed in on speaker Simpson, noting she “has a long history of causing harm to the LGBTQ community.”

An alumnus of Simon Fraser University, McKenna said he was “horrified” to see the name of his alma mater “on such an obviously divisive and discriminator event.”

SFSS thereupon quickly disavowed any connection to the conference.

“We want all of our most at-risk students to know that we stand with them, now and always,” SFSS said in a statement to CTV News.

“It is important for us to make it very clear to students that SFSS, in no way shape or form, endorse this event or the speakers.”

Redeemed Christian Fellowship, a student group under the SFSS umbrella, was apparently responsible for putting the SFSS logo on the poster, CTV News reported.

The Christian student group said it would no longer use SFSS logo to promote the event, SFSS told CTV News.

McKenna told StarMetro Vancouver he was upset by the conference’s unconventional use of LGBT acronym, which appears on the poster against a rainbow background.

“Anybody in today’s society is going to assume it has something to do with the LGBT community,” he said.

Grace Chapel’s Brother Ronald Brown countered the conference’s LGBT acronym was “incidental” and if using it stirs controversy, it “shows that something is amiss in society,” StarMetro Vancouver reported.

“Is there a patent on that acronym?” he asked.

Brown said youth who identify as LGBTQ will hear “the word of God” at the conference.

“Our teaching is based on the word of God, and whatever the word of God says, that’s what we’re going to be expounding,” he told StarMetro Vancouver.

“We see ourselves, the church, as a hospital, right? That’s where people who are sick and in need of help come.”