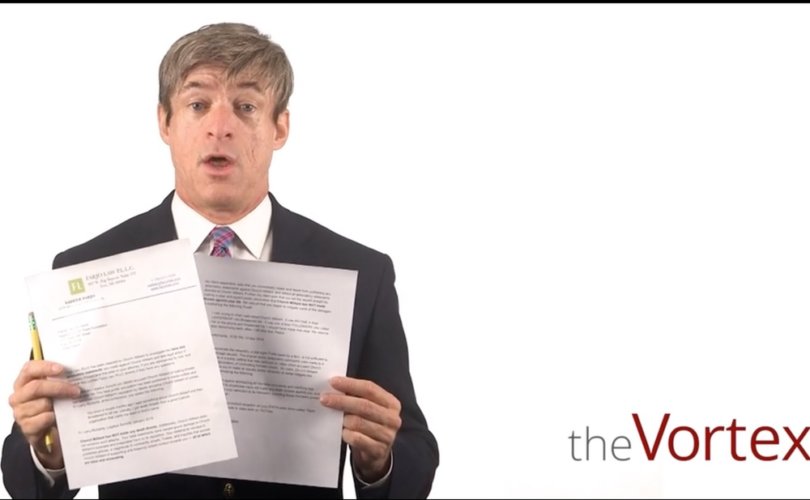 Michael Voris in the March 19, 2019 edition of The Vortex. Church Militant / screen grab

DETROIT, March 20, 2019 (LifeSiteNews) – Michael Voris of Church Militant has sent a cease-and-desist letter to celebrity priest Fr. Larry Richards demanding a retraction and apology for having claimed that Church Militant issued death threats against him. If the priest refuses the requests, Church Militant will pursue further legal action.

Fr. Richards claimed during a keynote speech at a conference in January hosted by Legatus that the Catholic media organization had threatened to kill him.

“A couple of months ago I said something about Church Militant, and they threatened to kill me,” he said. The popular 58-year-old priest went on to say, “Literally, I got death threats from a good Catholic organization that wanted me dead in God’s name.” Legatus is an influential association of Catholic CEOs. Following a report on the matter by LifeSiteNews, the 58-year-old Fr. Richards issued a statement on Twitter March 13 in an attempt to downplay his original statement.

“I was wrong in what I said about Church Militant – it was NO ONE in their LEADERSHIP who threatened me – it was one of their FOLLOWERS who called me on the phone and threatened me. I should have made that clear. We need to stop demonizing each other, I will stop first. Peace,” he wrote.

Church Militant founder Michael Voris responded on video that Fr. Richards has a “troubled mind” for having asserted something he knows is untrue.

“Not a soul here has ever threatened anyone's life, including Fr. Larry Richards, and the charge is not only disgusting and meant to destroy our reputation and good name, it also rises to the level of accusing us of criminal activity,” he said.

Voris said that to his knowledge no one at Church Militant has said anything publicly about the priest “prior to this rotten situation.” While his name may have been mentioned in passing, Voris said, it was never with “malice or dissection of him.”

Voris played a clip from Fr. Richards’ popular show on EWTN, in which the priest told a caller “Church Militant is not of God, stay clear of it!”

Voris called on Fr. Richards to show proof of his claim of a threat and release the name of the person involved. “Did you file a police report?,” he asked, “Why didn't you call us here the instant that alleged event happened?” Voris said that Church Militant’s attorney has drawn up a cease and desist order “because of the gravity and criminal nature of his charges.”

Voris added that if Fr. Richards can expect further legal action if he does not fulfill the demands.

Fr. Richards is the author of “Be a Man”, which seeks to guide Catholic men in spiritual and faith issues. Voris said that the “horrible state of affairs” within the Church includes members of the clergy who “lie about laity who want nothing more than the modernist errors and dissidents currently in control of the Church to be exposed” and where laity are “forced to hire lawyers to defend their innocence.”

“What a complete embarrassment. Fix this, Father. Fix it now. You wrote a book a while back extolling the masculine virtues. It was called Be a Man. We agree — be a man,” Voris said.