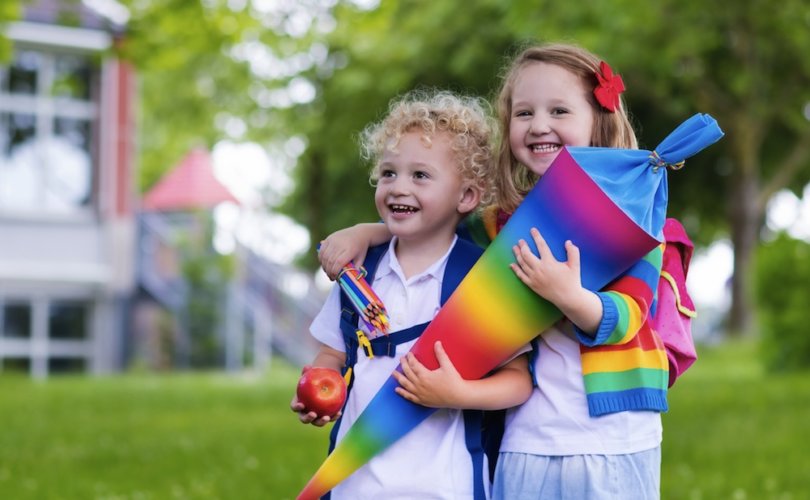 LONDON, England, November 15, 2017 (LifeSiteNews) — The Anglicans have newly revised directives for schools and teachers regarding gender.

In honor of anti-bullying week, the updated instructional “Valuing All God’s Children,” which was released in 2014 to instruct against “homophobia,” now includes “biphobia” and “transphobia” in nursery schools and primary schools.

Preschoolers, kindergarteners, and elementary school children should be encouraged to explore their gender identity, according to the Church of England. The little ones should feel uninhibited to “try out the many cloaks of identity” and “explore the possibilities of who they might be.”

Teachers in the church’s 4,700 schools throughout the U.K. are advised not to enable children to “conform” to traditional male/female “stereotypes.” Young children “are in a ‘trying on’ stage of life … so no labels need to be fixed,” the church document states.

“Pupils need to be able to play with the many cloaks of identity (sometimes quite literally with the dressing-up box),” the English church now teaches. “Children should be at liberty to explore the possibilities of who they might be without judgment or derision.”

Practically speaking, the ecclesial guidelines say boys “may choose the tutu, princess’ tiara and heels,” and girls may wear “the fireman’s helmet, toolbelt and superhero cloak.”

Parochial school teachers must be absolutely gender neutral “when they comment, praise or give instructions.” They are to relationally approach boys and girls “without (gender) expectation,” and to respond to non-conformity “without comment.”

Schools must “avoid labels and assumptions which deem children’s behavior irregular, abnormal or problematic just because it does not conform to gender stereotypes … Childhood has a sacred place for creative self-imagining.”

Canterbury Archbishop Justin Welby, leader of 80 million Anglicans worldwide, promoted the guidelines. He said “significant progress” had been made in the fight against bullying, but revisions were necessary to expand into bi- and trans-phobic bullying.

Rev. Franklin Graham, who was visiting England, lambasted the new guidelines. “I’m against bullying of any kind,” he added, “but children must be taught God’s truth. God ‘created them male and female’ (Gen 5:2).”

“The Church of England should not give in to the sinful, destructive, anti-God agenda of the LGBTQ — they should stand with God’s Word,” Rev. Graham posted on Facebook.

U.K. evangelical group Christian Concern criticized the instructional as well. Andrea Minichiello Williams characterized the sanctioning of gender confusion “unkind, unloving and lacking in compassion.” “We are all against bullying,” CC’s chief executive said, but “these guidelines … pursue an agenda that runs counter to the church’s teaching.”

“We are getting to the point where if you are not careful, the slightest slip from the correct agenda in a Church of England school will get you punished,” Williams added.  “The anti-bullies are becoming the bullies.”

Tatchell’s only criticism was that the church directive didn’t use gay-friendly verbiage.  “The phrase ‘cloaks of identity’ may not have been the best language to use, as it implies something additional and artificial that covers the true reality underneath,” he chided.  “For many LGBT pupils, dressing to express their sexuality or gender identity is not a cloak but an expression of their true selves.”