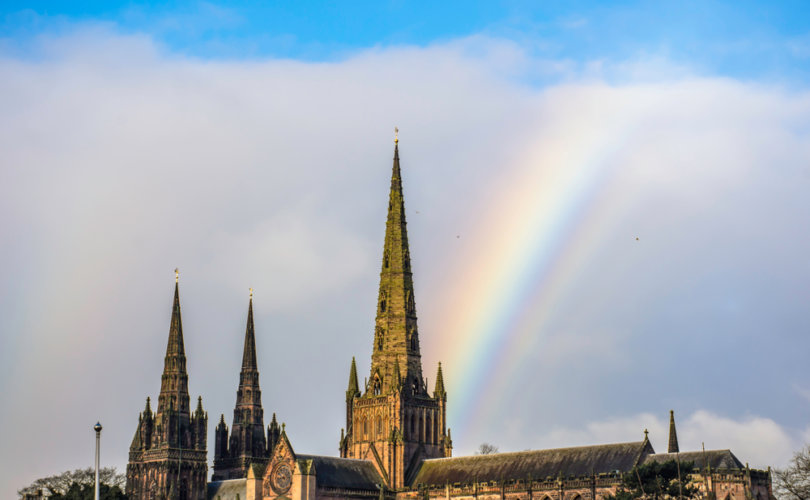 LICHFIELD, England, May 29, 2018 (LifeSiteNews) — Bishops in the Church of England have begun efforts to recruit gender-confused individuals to become church leaders for the stated purpose of projecting a more LGBT-friendly image.

The Diocese of Lichfield has issued a guidance titled “Welcoming and honouring LGBT+ people,” which declares that “nobody should be told that their sexual or gender identity in itself makes them an unsuitable candidate for leadership in the Church.” It expresses hope that “they, like everyone else, feel encouraged to serve on PCCs, or as churchwardens and worship leaders, for instance, and are supported in exploring vocations to licensed lay and ordained ministries.”

The document, which was written with the feedback of a listening group of people “identifying as lesbian, gay, bisexual, same-sex attracted, and heterosexual; single and partnered; celibate and married”; says it does not address “contested theological or ethical questions” such as blessing same-sex relationships or “marriages,” but is solely concerned with the “basic principle” that “all people are welcome in God’s Church.”

However, the guidance also declares that “intrusive questioning about someone’s sexual practices” is “almost always inappropriate,” and that it’s “unacceptable” to suggest that “homosexuality or gender difference is a sign of immaturity or a lack of faith,” positions that would seemingly preclude evaluating a potential church leader’s adherence to church teaching.

Near the end of the document, the bishops admit that the new initiative is an attempt to counter “the perception that the Church is homophobic and transphobic.”

The guidance follows the Church of England’s past decisions endorsing a ban on reparative therapy for people experiencing unwanted same-sex attraction, calling for a new liturgy to celebrate transgender worshippers, and allowing priests and bishops to enter “celibate” same-sex relationships, the UK Telegraph reported.

The Church has also said schools should encourage children to “try out the many cloaks of identity” by dressing up as the opposite sex, and last October Justin Welby, the Church of England’s Archbishop of Canterbury, said he did not have a “good answer” to whether homosexual sex acts were sinful.

The Church of England first separated from the Catholic Church in 1534 and has remained separate for most of its subsequent history. Catholic doctrine holds that homosexual inclination is an “objective disorder,” homosexual acts are “intrinsically disordered,” and that they can be approved “under no circumstances.”

Many believe the church’s various departures from traditional doctrine are alienating potential members rather than attracting them. Citing recent findings by the British Social Attitudes Survey (BSAS), the UK Spectator concluded that “Anglicanism is declining faster than any other majority denomination. With the current rate of decline, it would be set to disappear from Britain by 2033.”