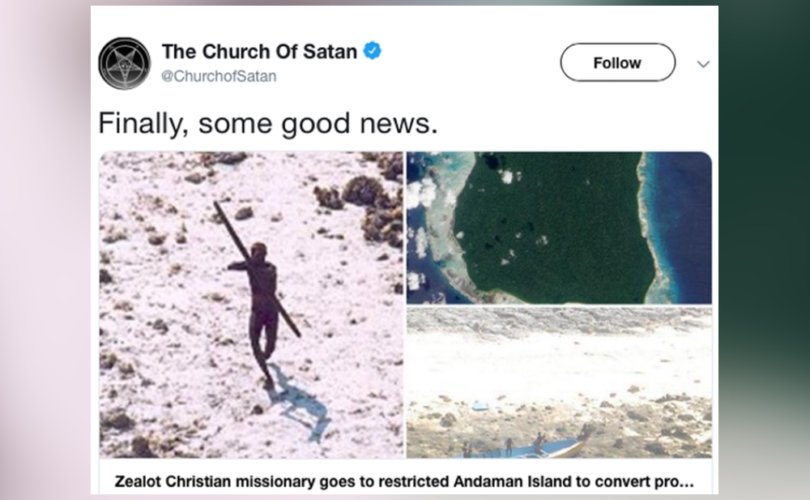 NEW DELHI, India, November 22, 2018 (LifeSiteNews) – Satanists are taking pleasure in the slaying of a U.S. Christian missionary at the hands of a hostile aboriginal tribe in Andaman and Nicobar Islands off the coast of India.

The Church of Satan posted on Twitter Wednesday a link to an article about the death of 27-year-old American John Allen Chau, a Christian missionary who went to preach to the Sentinelese people.

Satanists described the murder of this Christian missionary as “finally, some good news.”

When a Twitter user asked the Satanists why they were celebrating this man's death, someone going by the handle of Typhoid Taylor claimed the missionary deserved to die.

“The same reason I’d celebrate the death of a serial killer or rapist,” Typhoid Taylor wrote. “Bad people getting what they deserve is a good thing. Those people protecting their land, people, health, freedom, and tradition is a good thing. He was warned of the consequences.”

Others mocked the victim and his Christian faith.

Access to most of the Indian archipelago of Andaman Island, home of the hostile Sentinelese tribe, is restricted by Indian law, the same law that protects these aboriginals from being prosecuted for this slaying.

The specific location Chau visited, Sentinel Island, though, is reportedly open to visits from foreigners and the Christian missionary had apparently been there before.

On the day he died, Chau was first attacked with bows and arrows shortly after getting off the boat. His attackers then dragged his body to the beach with a rope tied around his neck.

Fishermen who had brought him there reportedly last saw him half-buried in the sand. A helicopter search of the area has so far failed to produce his body.