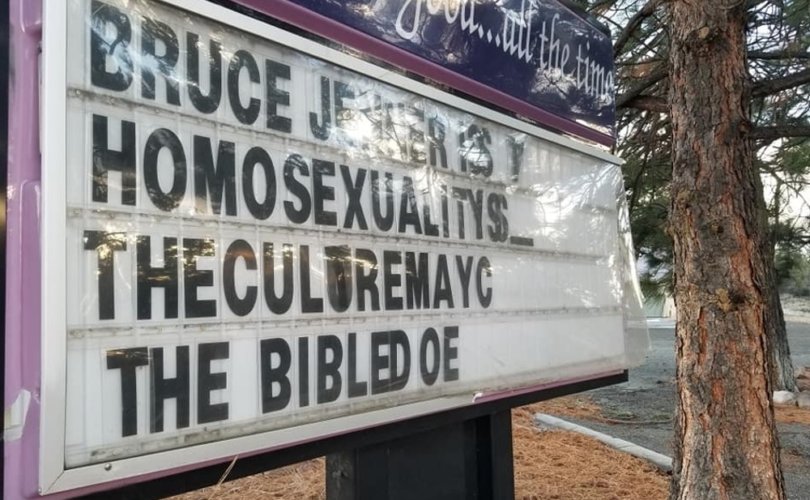 WEED, California, January 10, 2019 (LifeSiteNews) – After an American pastor refused to bow to pro-LGBT protesters’ demands that he change his church message board, he found the sign in ruins.

Pastor Justin Hoke of Trinity Bible Presbyterian Church in Weed, Siskiyou County, California angered some folks when he put up a message on the marquee outside his church last week reading “Bruce Jenner is still a man. Homosexuality is still a sin. The culture may change. The Bible does not.”

Although he normally changes his sign from week to week, Hoke said he would not take down his message until the protests cease. However, the protestors declared that they would keep up their pickets until the sign comes down.

Someone has saved them the effort, however. This morning Hoke found that his message board had been broken into and some of the letters of his sign missing or strewn on the ground.

“I woke this morning to find that our sign had been vandalized,” he informed friends over Facebook.

“They broke not only the plexiglas and stole some of the letters, they also busted the power box. I have not seen it up close yet as this picture was sent to me by a member of our congregation. Please pray that God would provide.”

Subsequently posting photos of the vandalism, Hoke wrote, “Here is the damage. As wickedness increases the fear of God decrees.”

According to NBC5, that message did not sit well with local woman Tawnya Mobbley, who described it as “hateful.”

“I should be able to love my partner, to hold her, to hold her hand wherever I want to go and shouldn’t have people being hateful,” she said. “I don’t think that my kid should feel having two mothers is a bad thing.”

There is no Biblical injunction against non-sexual touching by friends of the same sex, but sexual activity between two members of the same sex is forbidden by the Bible, as is sexual intercourse between an unmarried opposite sex couple. Marriage is recognized as a union between only men and women; in the New Testament, marriage is upheld as the lifelong union of one man and one woman.

Mobbley and her mother Jeanette had joined a small protest staged by Charolette (sic) Kalayjian, Amelia Mallory and Mishelle (sic) Le Guellec on Sunday, January 6 in response to the sign. The three organizers all have children, and Kalayjian said she didn’t want children to see it.

“If that sign can make me sad,” Kalayjian told the Siskiyou Daily, “imagine what it could do to a child.”

She told NBC5 that Hoke should keep his message indoors.

Pastor Hoke disagreed that his sign was hateful and said it merely expressed Biblical teachings. He told LifeSiteNews via email that his community believes they must witness to God’s word.

“We at Trinity Bible Presbyterian Church believe that part of our mission is to testify to God's Word,” he wrote. “Jesus said in His great commission to the church, ‘go into all the world and make disciples teaching them to observe all that I have commanded you.’”

“I have never mentioned Mr. Jenner in a sermon but I do regularly preach concerning the selfless love Christians must have in a world which no longer tolerates truth,” Hoke continued.

“We are to warn all men of God's coming wrath simply because we know that His wrath is coming upon all ungodliness and unrighteousness of men. We have a moral obligation to warn all men to repentant.”

In his Sunday sermon, Hoke preached on Ezekiel 33: 1-9 under the title “Love Warns.” He decried the American court decision to redefine marriage and took issue with the LGBT slogan “Love Wins.”

“What the world calls love is not love at all,” he told his congregation.

“Rather it is extreme mutually agreed upon selfishness which knows nothing of sacrifice, nothing of servanthood, nothing at all of seeking another’s highest good.”

Hoke told NBC5 that Trinity Bible Presbyterian Church doesn’t hate anyone and is “standing by its belief in the word of God and the Bible.”

“People are getting upset because we’re say this is wrong,” he observed. “It’s always been wrong. It still is wrong according to our God.”