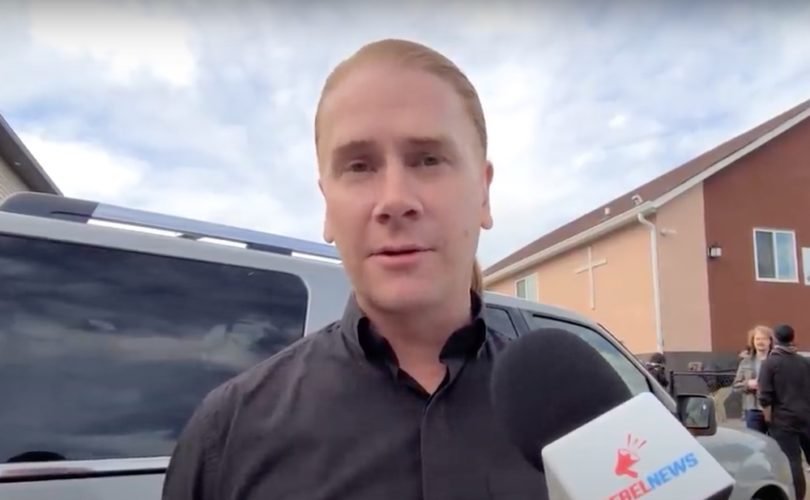 CALGARY, Alberta, June 15, 2021 (LifeSiteNews) – Days after holding an outdoor service amid severe coronavirus restrictions in Alberta, Pastor Peter Reicher, filling in for the previously jailed Pastor Artur Pawlowski, was visited by police and served an injunction violating COVID health rules. His church was vandalized the next day.

During the most recent service, the police drove by several times, and a police helicopter flew over the area. However, there was not direct contact with the police or a clear indication that they were scouting out the area.

On May 6, 2021, Associate Chief Justice John Rooke of the Alberta Court of Queen’s Bench issued a restraining order forbidding citizens to gather to publicly protest or to encourage such gatherings.

This order allows police to arrest, detain, and imprison anyone who disobeys the injunction. After being served with the injunction, to avoid arrest, a person must sign a document promising to forgo their Charter freedoms.

Reicher was served this court injunction  on May 24 while feeding homeless Calgarians.

According to Rebel News, on June 11, police visited Reicher and demanded that he sign a document promising to comply with the provincial ‘health’ regulations. They threatened to arrest him if he refused to obey. The interaction was livestreamed by Reicher’s wife, Axa.

After receiving advice from his lawyer, Reicher submitted to signing the papers, noting that he was doing so “under duress.” He was given a provincial court summons and agreed to attend a fingerprint appointment. “This is communism today in Canada,” he told the officers.

— Article continues below Petition —
PETITION: Tell politicians not to discriminate against churches when reopening society
Show Petition Text
21115 have signed the petition.
Let's get to 22500!
Thank you for signing this petition!
Add your signature:
Show Petition Text

Reicher encouraged the officers to uphold their oath to serve the people and asked them if they truly believed they were serving the people. “God bless you,” he told officers after signing.

Reicher’s wife, Axa, told officers that, “the devil has deceived you!”

“I have a recommendation for you,” she continued. “You need to go home and repent! Because what (you're doing is) criminal.”

“So you get paid to persecute Christians?” she asked an officer. “We get paid to do our job, yes,” the officer responded.

The following day, congregants at Reicher’s church found large amounts of horse manure, garbage, and needles spread throughout the parking lot. This act of vandalism is preceded by another indecent wherein nails and dog feces were left in the parking lot. In addition to this, Pawlowski’s home has suffered an arsonist attack.

In April, Pawlowski began a series of legal battles after police and a health inspector entered his church during Easter services. Pawlowski ordered them to leave, condemning their attempt to shut his church down and telling them, “Nazis, Gestapo is not allowed here.”

When police visited his church for a second time, Pawlowski told them, “I do not cooperate with Nazis. Talk to my lawyer … You came in your uniforms like thugs. That’s what you are: brownshirts of Adolf Hitler.”

In May, after a highway takedown, Pawlowski and his brother, Dawid Pawlowski, were arrested and charged with “organizing an illegal in-person gathering.” He was released two days later.

Recently, Pawlowski was accused with breaking his court order by delivering a sermon about resisting “government tyranny.” Pawlowski continues to fight these injustices in court.