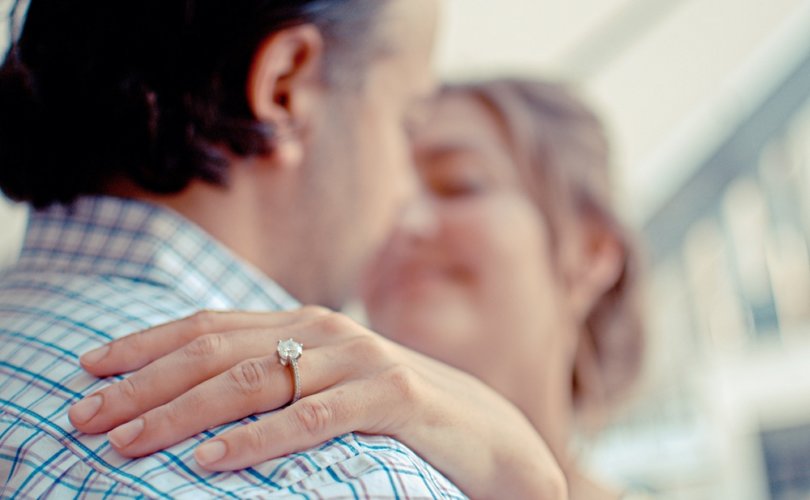 VATICAN CITY, October 21, 2019 (LifeSiteNews) ― A priest reporting on the Amazon Synod suggested today that the Church should ban gold and diamonds from her sacraments.

Fr. Thomas Reese, S.J., writing for Religion News Service, asked Fr. Dario Bossi, the provincial superior of the Combonian Missionaries in Brazil, if such a ban would send a message about environmentally irresponsible miners.

“Father Bossi and others have been very articulate in describing the damage done by mining, especially done by gold,” Reese said.

“And yet the Catholic Church continues to use gold in its sacred vessels, and we also hear about the damage from blood diamonds, and we continue to use gold rings and diamonds in the sacrament of matrimony,” he continued.

“Would it make sense then for the Church to send a message about how important it takes this by saying, ‘We will no longer use gold in sacred vessels’ and that ‘We won’t allow gold and diamonds to be used in the sacrament of marriage’?”

Reese stated that this would send an educating message to the world.

Father Bossi said that he didn’t represent the Church but considered the question. He said that only 10 percent of gold is used for medical purposes but otherwise is a useless material, used only as an asset or jewellery. He reflected that the Church is being called to live more simply.

“I believe, yes, it would be a strong sign, if the Church asked to withdraw [gold and diamonds] from her liturgy and sacraments,” Bossi concluded.

Bossi, who was the reporter for the Italian Language Circle A, had given a testimony regarding the damage mining has done in the Carajás region in the state of Marañhao in Brazil. Born in Italy, Bossi said that he had lived in Brazil for 15 years, 10 of them in the polluted region. He and the local community have been protesting the Vale company, an organization implicated in two death-dealing catastrophes.

The first, known as the Mariana dam disaster, destroyed a village and killed 19 people in 2015. It also polluted the Doce River with toxic waste, byproducts of iron production.

But the second catastrophe, the Brumadinho dam disaster, was even worse. On January 25, 2019, a byproducts dam at the Córrego do Feijão iron mine leaked, killing at least 248 people with 12 million cubic metres (423.77 million square feet) of toxic mud. The mud contaminated farmland around Brumadinho, and may eventually pollute over 300 kilometres (186 miles) of river.

Bossi described how mining companies cut down forests and use them to make coal, and said that pollution from their activities causes malformations in unborn babies. Children are poisoned by mercury, and local fish have much higher levels of mercury than is considered safe. Setting aside the Vale catastrophes, the missionary priest said that the gold industry was particularly problematic, for 230 areas and 30 rivers have been polluted by gold-hunters.

He asserted that areas, particularly indigenous areas, had to be kept free of mining and that the indigenous people have the right to determine what development projects affect their lands.

Gold, though not in itself a sacramental, is one of the few materials considered worthy of sacred vessels used by the Catholic Church.

The 2005 instruction Redemptionis Sacramentum states that only “noble” materials should be used:

Sacred vessels for containing the Body and Blood of the Lord must be made in strict conformity with the norms of tradition and of the liturgical books. The Bishops’ Conferences have the faculty to decide whether it is appropriate, once their decisions have been given the recognitio by the Apostolic See, for sacred vessels to be made of other solid materials as well. It is strictly required, however, that such materials be truly noble in the common estimation within a given region, so that honor will be given to the Lord by their use, and all risk of diminishing the doctrine of the Real Presence of Christ in the Eucharistic species in the eyes of the faithful will be avoided. Reprobated, therefore, is any practice of using for the celebration of Mass common vessels, or others lacking in quality, or devoid of all artistic merit or which are mere containers, as also other vessels made from glass, earthenware, clay, or other materials that break easily. This norm is to be applied even as regards metals and other materials that easily rust or deteriorate. [117]”

“Catholics spend a great deal of care and money on sacred vessels, vestments, and furnishings for the altar, because it is only right to give what is most precious and beautiful for the service of God,” explains My Catholic Faith, a 1949 version of the Baltimore Catechism (page 297). “Nothing is too good for the Lord of heaven and earth. The beauty of God’s house also impresses the beholder and helps devotion. Some worldly-minded people are prone to ask, ‘To what purpose is this waste?’ when they see how much care and money Catholics spend on sacred vessels, vestments, and church ornaments. Let us remember that Judas asked that when Magdalene anointed Our Lord.”

There is no instruction regarding the material used in wedding rings, let alone diamond engagement bands. Meanwhile, gold has not been the basis of world currencies for over 40 years.