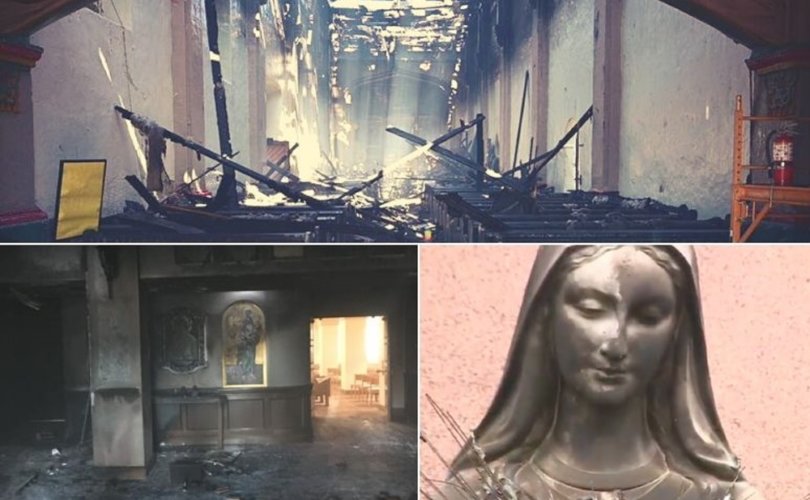 July 13, 2020 (LifeSiteNews) – Several churches and statues across the United States went up in flames or were vandalized over the weekend, including a mission church founded by Saint Junípero Serra just outside of Los Angeles almost 250 years ago.

On Saturday, a 24-year-old man was arrested and charged with attempted murder for setting fire to Queen of Peace Catholic Church in Ocala, Florida. He drove his car into the church, and proceeded to light two gallons of gasoline on fire. Parishioners were inside the church preparing for Mass, but were able to flee without injury.

After his arrest, he told police that he “knew what he was doing. Shields added even though he knew it was wrong, he planned to do it anyway. He purchased the gasoline [to set the church on fire] Saturday morning.”

At about 7:30 a.m. that morning, the suspect had “crashed his van through the front doors of the church,” before backing out again and leaving his vehicle.”

The man then entered the building “carrying large red gas cans, according to the Sheriff’s Office. The man pours gasoline on the floor, but then slips and falls. He’s seen throwing something into the room (it turned out to be a shoe) and igniting a large fire.”

One parishioner, right after the van had been driven into the church, went into the foyer to ask the man if he was okay. He responded by throwing a shoe and proceeded to start the fire, before fleeing the scene in his van.

Police, who were on patrol close to the church, managed to stop Shields after a brief chase across several red lights.

Dr. Taylor Marshall, founder of the New Saint Thomas Institute and author of Infiltration: The Plot to Destroy the Church from Within, told viewers and listeners of his popular podcast that on the day before the attack, “some men of the parish of Queen of Peace” had gone up to a group of police officers to give the medals of St. Michael for protection.

“They made a Catholic gesture,” Marshall said. “They were doing evangelization. They’re doing what we Catholics should do.”

“Guess what happened: Within 24 hours someone serving the invisible enemy ran his car into their church, and poured two gallons of gasoline and lit it,” he continued. “The same police officers were the ones who came to the church and got the bad guy. So you never know. I think it was the Holy Ghost leading these good men from the parish … to give this medal, these medals to the police officers.”

Every Sunday afternoon, a priest of the Priestly Fraternity of St. Peter travels from Sarasota to Ocala to offer the Traditional Latin Mass at Queen of Peace.

“I’m proud of my deputies for capturing this man so quickly and we appreciate the assistance from all of the state and federal agencies that worked alongside of us during this investigation,” Sheriff Billy Woods said in a statement.

Meanwhile, a statue of Our Lady was set on fire in Boston, Massachusetts, on Saturday evening. “Police spoke with Boston firefighters, who said that an unknown suspect had set fire to plastic flowers, which were in the hands of the statue, causing the face and upper body of the statue to be burned,” local station WCVB reported.

Fr. John Curran, the parish priest, told WCVB, “I was shocked. [There’s] disappointment, sadness. The image of Our Lady is so important for us and our faith. It’s such a contradiction to her love. Mary would never desecrate anyone, never hurt anyone, only offer them the peace and love of Jesus. I think that’s where it really hits us in our hearts.”

Another statue of Our Lady, located in New York, had been vandalized on Friday morning. “Investigators said an unidentified person was caught on camera spray-painting ‘IDOL’ on the statue in front of Cathedral Preparatory School and Seminary,” reported the local CBS station.

In Forth Worth, Texas, a small Protestant church building was vandalized and robbed on Saturday. The pastor and his family “said Fort Worth police located the suspect after they saw him pushing a shopping cart with items piled inside down the street,” according to the local NBC station.

“He admitted it and had our assistant pastor’s amplifier inside the grocery cart – with the assistant pastor’s name on it – as he was pushing it,” the family pointed out. “We thank God for the Fort Worth PD was paying attention [sic]. We appreciate you.”

In the early hours of Saturday, San Gabriel Mission was destroyed in large parts by a fire which, at the time of this writing, had not been linked to arson or vandalism.

“The fire was reported around 4:30 a.m. and appears to have broken out in the rear of the church,” according to Angelus News. “Multiple fire departments responded and the fire was extinguished soon after.”

“Mission San Gabriel Arcángel was founded in 1771 by Franciscan missionary Fray Junipero Serra, the fourth mission in present-day California founded by the future saint.” Pope Francis canonized the missionary, who once walked “to Mexico City with a painful ulcerated leg to obtain the authority to discipline the military who were abusing the indigenous people,” during his visit to the United States in 2015.

Archbishop José H. Gomez took to Facebook on Saturday morning, saying he woke up “before dawn this morning to news that our beloved San Gabriel Mission, founded by St. Junípero Serra in 1771, was burning. Thank God no one is hurt.”

He immediately went to the church “to pray with the people.” He added, “St. Junípero, pray for this city, this state, and this country that you helped to found.”

“This destruction comes as we are getting ready to celebrate the 250th anniversary of this great mission,” Gomez said during a sermon on Sunday. “But this fire changes nothing. Mission San Gabriel will always be the spiritual heart of the Church in Los Angeles, the place from which the Gospel still goes forth.”

The archbishop referred to a prayer written by St. Junipero Serra. “Let us bear every hardship for the love of You and the salvation of souls. In our trials, may we know that we are loved as Your own children.”

As San Gabriel Mission was undergoing renovations ahead of the 250th anniversary of its founding, “much of the artwork in the sanctuary, including historic paintings and other devotional artifacts, had been removed prior to the fire,” reported Angelus News.

Only days before the fire, a statue of St. Junipero Serra had been removed from public view by the staff of San Gabriel Mission in order to protect it from rioters. Other statues of the missionary saint in California had been destroyed by people affiliated with the Black Lives Matter movement.

On Sunday, “a fire broke out” in St. Mark’s Catholic Church in Birmingham, Alabama, damaging the roof, according to a local news report.The chapel also sustained water damage. No one was injured.

Authorities “said it's unclear how the fire started, but thunderstorms appeared to be moving through the area,” the report added.

In view of the significant number of churches and statues in flames or vandalized, some conservatives have asked why many media are not covering these incidents more prominently.

Among others, Lila Rose, founder and president of pro-life organization Live Action, tweeted, “Catholic Churches in at least seven states have been vandalized or burned recently. In FL yesterday, mass attendees were in church when it was lit on fire. I see little reporting on this and even less outcry from progressive leaders. Why? Condemning this shouldn’t be partisan.”