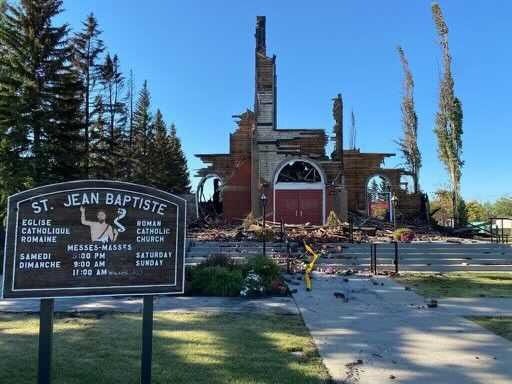 CALGARY, Alberta, July 2, 2021 (LifeSiteNews) — Churches were vandalized, and statues of monarchs past and present were toppled on Canada’s national holiday as a wave of anti-Christian violence continued to sweep across the country in the name of victims of the country’s now-defunct residential school system.

The anonymous vandals daubed the churches with red and orange paint and broke a window in one of the churches to throw paint inside. They also defaced a statue depicting the Sacred Heart of Jesus.

“The vandalism of Churches across Alberta is appalling,” he tweeted and posted a photograph of some of the damage.

“This happened today at an African Evangelical Church in Calgary. The congregation is made up entirely of new Canadians, many of whom came here as refugees fleeing countries where Churches are often vandalized & burned down.”

Kenney observed that the Christian refugees had hoped they could “practice their faith peacefully” and that some are “traumatized by such attacks.”

“This is where hatred based on collective guilt for historic injustices leads us. Let’s seek unity, respect & reconciliation instead,” the premier said.

Police believe the damage to the Christian churches is linked to outrage after a series of discoveries of unmarked graves near former boarding schools at which thousands of Canada’s First Nations people were once educated.

As yet the bodies have not been exhumed, and the date of the graves is unknown. The first residential schools opened in the 1840s. They were taken over from the religious bodies that operated them in 1968 and the last one closed in 1996.

The discoveries have horrified the country, brought the scandal of the residential schools back into the headlines, and reawakened resentment against Christian communities, especially the Catholic Church, that operated the government-mandated schools until 1968.

Since June 20, seven Catholic churches, five of them belonging specifically to First Nations communities, have suffered arson, and five were burned to the ground.

On June 30, St. Jean Baptiste Parish in Morinville, Alberta was destroyed by fire.

Also on June 30, St. Kateri Tekakwitha Church in Indian Brook, Nova Scotia, another parish belonging to a First Nations community, was damaged by arson but not destroyed.

After midnight on July 1, a “suspicious fire” broke out in St. Patrick’s Catholic Co-Cathedral in Yellowknife, the capital city of Canada’s Northwest Territories.

Several other Catholic churches have been vandalized in the past two weeks. On June 26, a woman was seen vandalizing a statue of St. John Paul II outside Edmonton, Alberta’s Polish-Canadian Holy Rosary Catholic Church with red paint. On June 24, blasphemous and obscene graffiti was painted on Merciful Redeemer Catholic Church in Mississauga, Ontario.

Some protesters have turned their rage on symbols of Canada’s history. On the July 1 Canada Day holiday, a crowd of protesters in Winnipeg, Manitoba shrieked and cheered as fellow protesters toppled a large statue of Queen Victoria, who reigned from June 1837 until her death in 1901. Protesters also knocked over a statue of Canada’s current monarch, Queen Elizabeth II. On the same day, a statue of the explorer Captain Cook was destroyed in Victoria, British Columbia and thrown into the ocean.

A Toronto mother told LifeSiteNews that she was not surprised by the vandalism.

“We are at the start of the summer, and things can only get worse for Catholic churches,” Teresa Buonafede told LifeSiteNews via social media.

Buonafede believes that some of the arsonists and vandals don’t really care about the issues, but that others are doing it “in retaliation” for the discovery of the graves.

“People are upset and angry and the media is placing the blame, almost exclusively, with the Catholic Church,” she said.

However, Buonafede says that Catholics themselves, she among them, are upset with the Church’s role in the residential schools.

“We are upset at the neglect that happened at all residential schools and the disregard for the bodies of those First Nation children,” she said.

“If Toronto and other areas can afford obscenely costly cathedrals and renovations, surely we can give more to the First Nations.”