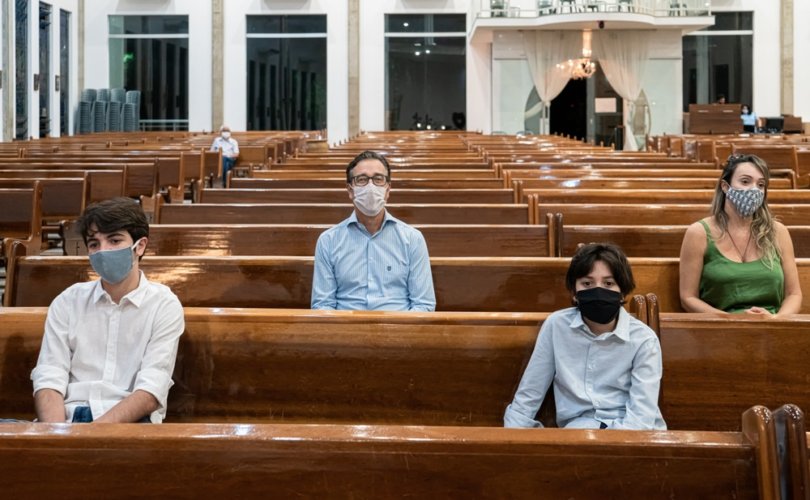 September 23, 2020 (FRC Action) — The magnitude of recent headlines pertaining to the new vacancy on the United States Supreme Court and the subsequent political maneuvering has understandably overshadowed the news cycle. However, another significant story that Americans (and especially conservative Christians) should care about is how various state and local governments continue to violate the First Amendment rights of churches.

In short, antagonism towards churches and houses of worship persists in certain areas throughout the country. Unfortunately, even as the coronavirus abates and America reopens, several states and cities have demonstrated a startling level of bias against churches. In fact, as of today, religious worship is still prohibited or subjected to unequal treatment (compared to secular activities) in six states — California, Nevada, Maine, Connecticut, New Jersey, and Virginia. In California, the state where some of the most egregious bias has surfaced, 30 of the state's 58 counties continue to prohibit churches from holding indoor worship services. In counties where churches can meet indoors, singing and chanting activities are forbidden, and churches are subject to strict attendance limits.

However, despite the draconian measures still in place throughout the Golden State, there was good news out of Illinois last week when the city of Niles announced they had dropped charges against Pastor Daniel Chiu. The pastor of the Romanic church Logos Baptist Ministries had been issued an $800 fine for holding worship services. Mat Staver, who represents the church, announced that he will ask the Supreme Court to review the case.

Of course, it should be inconceivable that government officials would threaten churches for holding worship services. As I have noted previously, the overwhelming majority of churches complied with government mandates to suspend in-person worship in March. In fact, most churches suspended public meetings before being instructed to. However, as the summer wore on, and it became clear that initial predictions about the virus were inaccurate, churches began to meet again while implementing CDC-informed health and safety precautions to protect their parishioners and visitors.

But despite taking appropriate safety measures, churches were instructed not to open in some states. Although liquor stores and abortion facilities could resume operations in many of these states, churches — which were not deemed “essential” — were held to restrictive standards that made it virtually impossible to meet. When some pastors defied the unfair orders, many were threatened with arrest and jail time. Predictably, one of the worst perpetrators of bias against churches is Governor Newsom and local authorities in California.

For example, Harvest Rock Church in Pasadena incurred the wrath of local officials when they decided to reopen for worship a few weeks ago. After a judge denied an injunction from Harvest Rock, the church received a letter on August 13 from a city attorney demanding the cessation of all in-person worship services. The letter explained that if the church continued holding indoor gatherings, church owners, staff, and parishioners would be “subject to criminal penalties [i.e., fines], as well as the closure of the church.”

Senior Pastor Ché Ahn and other church leaders could face additional charges including fines for each violation and a potential one-year jail sentence. Worth noting is that Harvest Rock asks attendees to follow guidelines including social distancing, wearing a mask “when entering and exiting the auditorium,” and staying home if you are at risk or are feeling flu-like symptoms.

Earlier today, attorneys representing the church presented oral arguments before a three-judge panel of the Ninth Circuit Court of Appeals, and requested the church be allowed to meet indoors while appealing state and local orders against indoor worship services.

Another California church facing pressure from officials is Godspeak Calvary Chapel. On August 21, Pastor McCoy appeared before the Superior Court of Ventura County and was held in contempt of the court for defying the local ban on indoor worship services. Additionally, Calvary Chapel was fined $3,000 for holding six church services in defiance of local lockdown orders. Despite the fines, the church continues to gather for indoor worship. According to Pastor McCoy, gathering for worship is a matter of religious liberty and it is unfair for some businesses to be allowed to reopen while churches are forced to hold meetings outside.

Finally, Pastor Jack Trieber and North Valley Baptist Church have also been in the news recently for holding services. North Valley was fined $5,000 for every service they held with additional fines being issued for singing, leading to an eventual $112,000 in fines. A cease and desist letter posted on the front door of the church demanded that the church immediately stop holding services and acknowledged that agents had been sent into the church to observe the congregation. After a weeks-long legal battle, Pastor Trieber decided to move worship services to the church parking lot. Although Trieber has asked that the county remove all fines, the county has said that it will not forgive the fines they imposed on North Valley Baptist Church.

While the recent news from Illinois was a welcome development, the foregoing examples from California reveal that the First Amendment is under assault. Under the guise of enforcing emergency public safety guidelines, too many officials have overstepped their authority and unfairly targeted churches. It is time for Americans of all faiths and religious backgrounds to stand up for their constitutionally protected freedoms and remind officials that church is essential.