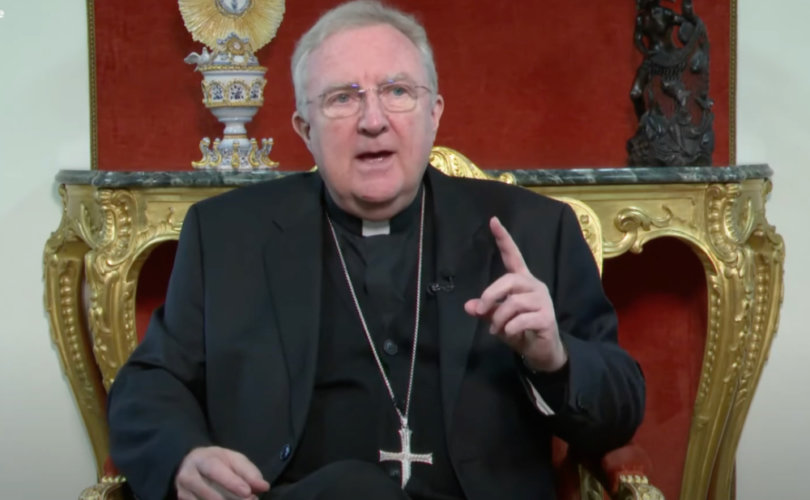 VATICAN CITY (LifeSiteNews) – Cardinal-elect Arthur Roche, the Vatican’s liturgy chief, praised the recent restrictions on the Latin Mass, saying they provided a “regulation of the former liturgy” that was necessary because Vatican II put “forward a new liturgy for the vital life of the Church.”

In an interview conducted with Vatican News, Roche, Prefect of the Vatican’s Dicastery for Divine Worship and Discipline of the Sacraments, supported Pope Francis’ restrictions on the Latin Mass as contained in Traditionis Custodes, and subsequently extended by Roche himself in his Responsa ad dubia.

The cardinal-elect lamented the “so-called ‘battles’ over liturgy,” saying “the reform of the liturgy” as presented after the Second Vatican Council “is really a very important matter today and also not something to be taken as an option.”

Doubling down on his joint “attack” with Pope Francis upon the traditional liturgy of the Church, Roche stated:

All that is taking place is the regulation of the former liturgy of 1962 Missal by stopping the promotion of that, because it was clear that the Council, the Bishops of the Council, under the inspiration of the Holy Spirit, were putting forward a new liturgy for the vital life of the Church, for its vitality.

This task is “really very important,” he said, before adding “and to resist that is, is something that is really quite serious, too.”

The Yorkshire-born archbishop stated that “the celebration of the Mass is not something to be a matter of personal choice,” a statement that devotees of the Latin Mass have also consistently proposed.

“We celebrate as a community, as the entire Church,” he added, “and the Church throughout the centuries, has always regulated the form of liturgy that it has come to believe is more pertinent for a particular age.”

The cardinal-elect’s interview was met with strong disapprobation from Catholics online, with Catholic news site OnePeterFive writing, “Quoting outdated liturgical scholarship, check. Repudiating Cardinal Ratzinger’s ecclesiology and critique of the consilium, check. Decrees and attacks on the faithful based on ignorance, check.”

If Roche knows this to be false, which it is, he is a shameless liar, typical of the men the current pope has promoted to high office.

If he is so ignorant to believe what he says in this thread (all of which is false), then he’s grossly incompetent and should be removed. https://t.co/BBdL9PwYE0

In particular, while Roche attested that Vatican II had proposed a “new liturgy,” liturgical scholar Matthew Hazell noted that such was not found in the Council documents. “These constant attempts by the DDW Prefect to rewrite history are so very tiresome,” Hazell said.

These constant attempts by the DDW Prefect to rewrite history are so very tiresome.
The fact is that Vatican II’s Constitution on the Liturgy repeatedly proposes an «instauratio» of the liturgy (e.g. nos. 1, 14, 21, 23-24, 33, 43, 87-90): a “renewed” liturgy, not a “new liturgy”! https://t.co/ufAOvAwLZu pic.twitter.com/TLJATDeYpD

— Article continues below Petition —
Pope Francis: Don't make Bishop McElroy a cardinal - he knew about McCarrick
Show Petition Text
12690 have signed the petition.
Let's get to 15000!
Thank you for signing this petition!
Add your signature:
Show Petition Text

As Hazell noted, contrary to Roche’s statement that Vatican II proposed a “new liturgy,” in his 1988 address attacking Archbishop Marcel Lefebvre, Cardinal Joseph Ratzinger stated, “This particular Council defined no dogma at all, and deliberately chose to remain on a modest level, as a merely pastoral council; and yet many treat it as though it had made itself into a sort of superdogma which takes away the importance of all the rest.”

Even Pope John XIII, in his opening address to the Council, outlined that it would be “pastoral” in nature, and instead of innovating, would “work out ways and means of expounding these truths in a manner more consistent with a predominantly pastoral view of the Church’s teaching office.”

Roche appealed to 20th century liturgical scholar Father Josef Jungmann, whose monumental 1948 history of the Mass Missarum Sollemnia was hailed by traditionalists but who later became a key proponent of the liturgical upheaval that emerged from the Council, spearheaded by Archbishop Annibale Bugnini.

Jungmann “showed how over the centuries the Mass has been changed in this way in order to fit the needs of the day,” Roche said. Any “resistance to this is quite a serious matter, which the Pope has pointed out in his document on the liturgy, Traditionis Custodes,” Roche added.

However, OnePeterFive disputed Roche’s praise of Fr. Jungmann, saying “Jungmann’s scholarship is very good, but it promotes the outdated and Protestant notion of the corruption theory, which is the principle of Iconoclasm undergirding the Novus Ordo.”

Critiquing Jungmann’s liturgical writing and influence, Dr. Carol Byrne wrote that “Jungmann’s theological thinking turned out to be remarkably similar to that of the 16th-century Protestants, nothing less than a rejection of the doctrine of the Mass as the Catholic Church has always understood it.”

However, Archbishop Roche’s comments regarding his desired cessation of the traditional Mass are not without precedent. After Traditionis Custodes was released, he hailed the restrictions placed on the Mass, the provision of which he called an “experiment” that “has not entirely been successful.”

“It’s clear that Traditionis Custodes is saying ‘okay, this experiment has not entirely been successful,’ and so let us go back to what the [Second Vatican] Council required of the Church,” the archbishop continued.

In February, Roche repeated his sentiments, calling the remaining provisions of the Latin Mass “a pastoral concession,” and that the growth of the Latin Mass “couldn’t be tolerated because the Council had changed the way in which we’re going forward. That’s just a simple matter.”