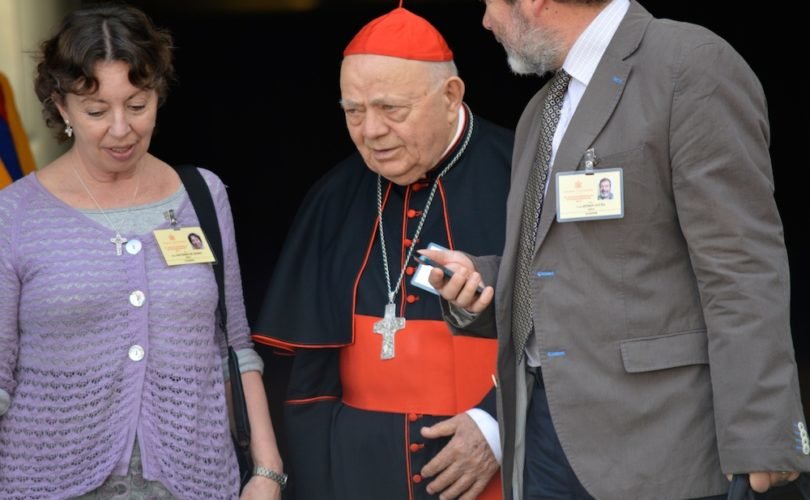 Cardinal Elio Sgreccia walks out of the Synod Hall at the Extraordinary Synod of Bishops on the family.John-Henry Westen / LifeSiteNews

ROME – Amidst a heated debate over the Christian vision of marriage among Church leaders in Rome, an Italian cardinal emphasized to LifeSiteNews in a video interview last week that, contrary to the way it’s seen in the world, the Church’s teaching “enriches love” between a couple.

“Various ideologies and cultures, in particular in Western countries, view the Christian concept of marriage as restricting of human love. This is not the true vision,” Cardinal Elio Sgreccia, 86, told LifeSiteNews.

“The message of the Gospel enriches love between a man and a woman, not only in terms of the sharing of love in full complementarity, but also because it opens the couple to communion with divine love,” added the cardinal, a revered bioethicist who led the Pontifical Academy for Life from 2005 to 2008.

At the ongoing Extraordinary Synod of Bishops on the family in Rome, which runs from October 5-19, one of the central themes has been how the Church should respond to the faithful’s increasing misunderstanding of the Church’s vision of marriage.

Pope Francis himself told Argentina’s La Nacion, in an interview published on the opening day of the Synod, that one of the important topics he hoped the Synod would take up is “the new habits of today’s youth,” noting that many today are choosing to live together and not marry at all.

Another concern, which Cardinal Sgreccia raised, is the defiency of the Church’s efforts to prepare young couples for marriage.

“The beauty of this Gospel message is not sufficiently offered in marriage preparation courses,” he said.

“However, the presentation must also be realistic because a wedding is not the end, but the beginning of a journey,” he added. “This journey will demand sacrifices, even to ever higher levels in the direction of sanctity, to which we are all called.”