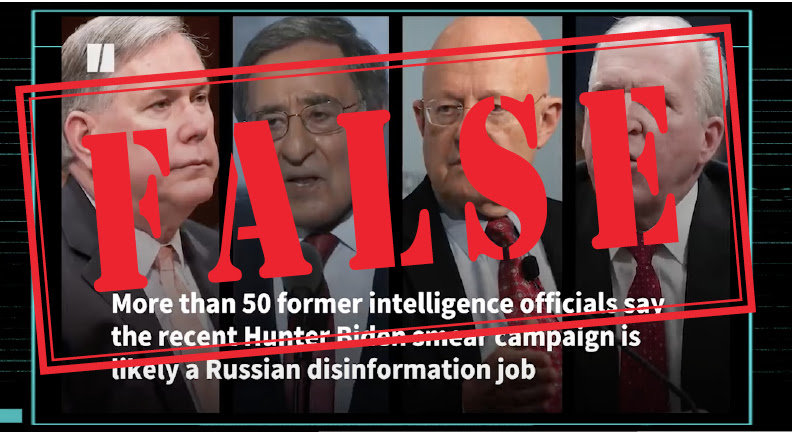 (LifeSiteNews) — Glenn Greenwald has issued an in-depth video report which he says offers “definitive proof” that the CIA, Big Tech, and much of corporate media colluded in suppressing truth and manufacturing lies in order to drag their preferred candidate, Joe Biden, across the finish line in the 2020 presidential election.

Greenwald, a principled, well-respected independent journalist, details how incriminating evidence discovered on a laptop which Hunter Biden had long ago abandoned at a computer repair shop — reported on in a pair of devastating pieces by the New York Post at the time — was ignored by mainstream media, fraudulently dismissed by former national intelligence officials, and essentially made inaccessible to the public by Big Tech social media sites Twitter and Facebook.

The computer contained emails showing that then-Vice President Biden had come under the influence of bad actors in Ukraine and Communist China and had used his powerful position in the Obama administration to pressure government Ukrainian officials into firing a prosecutor who was investigating the energy firm, Burisma, which was paying the younger Biden $50,000 per month to sit on its board of directors.

Two evidence-based New York Post reports “raised serious questions about [Joe Biden’s] integrity and ethics: specifically whether he and his family were trading on his name and influence to generate profit for themselves,” wrote Greenwald in a related Substack post.

What followed was “extraordinary deceit” and “brute censorship” perpetrated first by a cadre of former CIA officials, promoted by mainstream media, and enforced by Facebook and Twitter.

The original New York Post revelations have had new life breathed into them thanks to a just-published book by Politico reporter Ben Schreckinger, titled The Bidens: Inside the First Family’s Fifty-Year Rise to Power. Greenwald praised Schreckinger, noting that the young reporter had “spent months investigating the key documents published by the New York Post and found irrefutable proof that these emails and related documents are indisputably authentic.”

“We now have even more definitive proof than we ever had before about what a grave assault this was on our democracy and what an extreme example of journalistic corruption it was, as well,” asserted Greenwald in the one-hour video.

“You had this mountain of evidence. The problem was that it was all compiled by the only outlets interested in investigating this story, which were conservative outlets like The Daily Caller and Fox News,” he said. “And so it got ignored almost entirely by the liberal wing of the corporate media that was desperate to elect Joe Biden and bury any stories like these that might have been harmful to his chances to win.”

“In other words: They were acting as campaign operatives and not as journalists,” explained Greenwald.

“They had no interest in investigating this. They pretended this evidence of authenticity didn’t exist, and in its place what they used was an outright lie from the CIA, from ex-CIA officials like John Brennan and others who had spent years propagating frauds in Russia-gate and feeding it to the media outlets,” he continued. “And instead of investigating, instead of reporting on the contents of the story, they just repeated this … lie over and over as an excuse to censor the story and to get people to ignore it. And to this very day they maintain this lie was true.”

Greenwald pointed out that media reports which followed from the letter by the former intel officials distorted the words of those officials, turning their attempt to inject suspicion about the authenticity of the Hunter Biden laptop story into outright lies in national headlines.

The former national intelligence agency “spooks,” as Greenwald calls them, wrote in their statement:

We want to emphasize that we do not know if the emails, provided to the New York Post by President Trump’s personal attorney Rudy Giuliani, are genuine or not and that we do not have evidence of Russian involvement — just that our experience makes us deeply suspicious that the Russian government played a significant role in this case.

The letter contains two separate assertions: 1) the documents came from Russia and 2) they are fake (“disinformation”), noted Greenwald. The former intelligence officials clearly admitted further down in the letter that “we do not know if the emails are genuine or not,” and “we do not have evidence of Russian involvement.”

Media outlets, who were “desperate” to get Democratic candidate Joe Biden into the Oval Office in order to dislodge President Donald Trump, ran with the insinuations published by the cadre of former intel officials.

“They buried the truth,” said Greenwald, while treating “unverified claims as truth.”

“This letter, from known liars at the CIA, gave [media outlets] the excuse to perpetrate a massive fraud on the American public,” he added.

Facebook quickly moved to adjust its algorithms in order to vastly limit the visibility and impact of the New York Post articles. Greenwald drew attention to the fact that the Facebook communications officer who announced the limiting action, Andy Stone, is likely not a disinterested third party. Stone had spent the first part of his career as Democratic operative working for the House Majority PAC, Democratic Sen. Barbara Boxer, and the Democratic Congressional Campaign Committee (DCCC).

In his Substack post, Greenwald summarized the rise in power and influence of what he calls the “axis” of CIA, Big Tech and the DNC-allied wing of corporate media:

A severe escalation of the war on a free internet and free discourse has taken place over the last twelve months. Numerous examples of brute and dangerous censorship have emerged: the destruction by Big Tech monopolies of Parler at the behest of Democratic politicians at the time that it was the most-downloaded app in the country; the banning of the sitting president from social media; and the increasingly explicit threats from elected officials in the majority party of legal and regulatory reprisals in the event that tech platforms do not censor more in accordance with their demands.

Speaking of Politico journalist Schreckinger’s new book, Greenwald said, “Now we have a mainstream reporter proving dispositively that the key emails were authentic all along. They were never ‘disinformation’ or forgeries.”