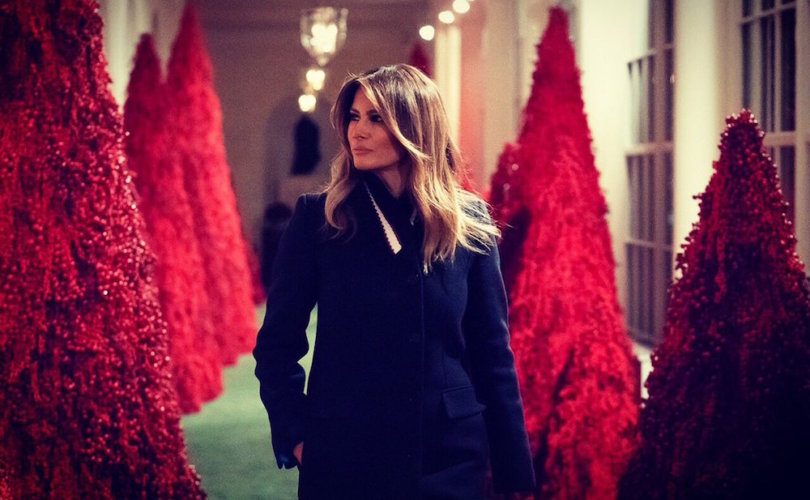 WASHINGTON, D.C., November 28, 2018 (LifeSiteNews) – Most Americans would likely expect decorating the White House for the Christmas season to be a rare exemption from the hostility of 2018 politics, but with Donald Trump in office even holiday traditions have become a political target.

This week, First Lady Melania Trump unveiled the annual holiday decor for the Trump family’s second Christmas in the White House, featuring red topiary trees made from cranberries and red berries, gingerbread recreations of various D.C. landmarks, and an 18th-century nativity scene originally given to the White House under the Johnson administration.

The People’s House @WhiteHouse is ready to celebrate Christmas and the holiday season! pic.twitter.com/oejKW3mC15

But rather than enjoying the White House’s innocuous holiday makeover, numerous left-wing figures are instead assailing Mrs. Trump with some of their most hyperbolic rhetoric yet.

The Washington Post tweeted that the decorations “induc[e] flashbacks to phantasmal nightmares from our shared cultural memory” of the Trumps’ first presidential Christmas decor, which liberals similarly attacked as “nightmarish” and “desolate.”

It’s still a month until Christmas, but at the Trump White House, it’s never too early to start inducing flashbacks to phantasmal nightmares from our shared cultural memory. https://t.co/6AQs0QpxJa

“Perhaps determined to continue signaling disregard for her critics, Trump has repeated the idea of horror-tinged White-House decor in at least one corner of the place, lining an entire hallway with blood-red Christmas trees that immediately reminded gawkers on social media of fun holiday movies,” Vox’s Aja Romano writes. “Like Stanley Kubrick’s Christmas classic The Shining!”

From wreath bows to Santa Claus’ red suit, red is of course one of the two colors most associated with Christmas, yet Romano not only collected numerous tweets invoking everything from pig’s blood to The Handmaid’s Tale, she claimed the Left’s reaction “speaks to the broader polarization between the public and the presidency, and the sense that the White House itself has become a visual representation of what many people view as the real-life horror being carried out by the Trump administration.”

This is a Doctor Who Christmas Special villain, isn’t it? They’re animatronic muppets from a planet with a super-high Scrabble score.

They’re sentient polyester planning to set themselves on fire in solidarity with the urban-wild land fire interface.

“Perhaps this is all part of a clever conceit, a conceptual representation of Christmas as a story of contradictions,” Slate’s Christina Cauterucci writes, “a pregnant virgin, a king born in a stable, and a vengeful adulterer casting himself as the savior of a holiday celebrating the Messiah’s birth.”

The Daily Wire has compiled more reactions, with Paul Bois commenting that they go “beyond mere differences in taste and into pure ‘Mean Girls’ territory.”

Vice’s Eve Peyser called the decor a “circle of hell Dante could never have dreamed up,” fitting the “bleakness of the Trump era.” Vanity Fair’s Kenzie Bryant wrote that the stylings displayed a “touch of menace,” particularly the trees “dyed with what I assume is liberal blood a-boiling.”

Daily Caller columnist Benny Johnson had a different reaction to the decorations, which he saw up close during a private tour. Johnson attributed the hostility to the “confirmation bias of liberal reporters who cannot bring themselves to find a single shred of happiness or joy in anything that the Trump family does.”

“There was something magical about the 200-year-old house – done up in grand, traditional Christmas fashion,” he wrote. “Every room of the White House was open and glowing. The rooms were dripping in history and twinkling Christmas lights. The halls were decked. To have the liberty to [wander] the rooms freely at night, with nothing but the glow of Christmas lights illuminating, is an experience.”

Johnson suggested that liberal reporters “apply for a credential and go look at them yourself” to see if the decorations are “actually horrifying? Scary? From Hell?” With any luck, he concluded, the “media’s small heart” could grow “three sizes that day.”