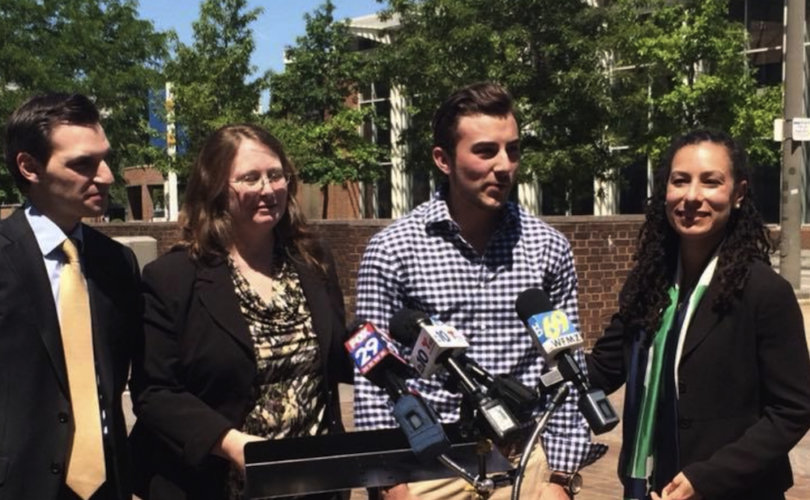 PHILADELPHIA, Pennsylvania, May 30, 2018 (LifeSiteNews) – A U.S. Circuit Court of Appeals panel took less than 20 minutes to deny an appeal by students who sought to protect their privacy rights in their public high school’s restrooms and locker rooms.

In the end, the three-judge panel took less than 20 minutes to unanimously rule in favor of the school board’s formerly unpublicized policy allowing students to use opposite sex restrooms and locker rooms based on their self-proclaimed gender identity.

The case had been brought before the court by four Boyertown, Pennsylvania High School students who are concerned about the loss of their privacy rights in what have always been single-sex facilities.

According to a report issued by ADF in advance of the hearing, “During the 2016-17 school year — without informing parents or students — the school district secretly opened its high school locker rooms, showers, and restrooms to students of the opposite sex, which violated many students’ bodily privacy rights. Some of the students in the suit involuntarily encountered students of the opposite sex in various states of undress in school restrooms and locker rooms.”

“No student should be forced into an intimate setting — like a locker room or shower — with someone of the opposite sex,” said ADF attorney Wenger. “The Boyertown District could have crafted policies that respect the privacy concerns of all students and are also sensitive to the needs of individual students. Instead, the district failed to fulfill its responsibility and harmed students rightfully concerned about their bodily privacy. The district must correct its policy — not only for our clients but for all students within the district.”

“School officials have a duty to protect the privacy and dignity of all students,” added fellow ADF attorney Christiana Holcomb. “Our laws and customs have consistently recognized rights of privacy, and there is no legal mandate that every student in the district give up these rights.”

In a press release, the pro-transgender Women’s Law Project (WLP), which had filed an amicus brief on behalf of the school district’s transgender policy, was dismissive of the case, saying the “four cisgender students” represented by ADF “claimed they were harassed by the mere presence of a transgender person in the locker room or restroom.”

“This ruling is a huge victory for the rights of transgender students” continued the WLP statement.  “The momentum is undeniable, and the Third Circuit panel sent an important message today by issuing its decision unanimously and immediately.”

The PA Youth Congress –– and organization of young LGBTQ Pennsylvanians seeking to change public policy, tweeted:  “We WON! The US Third Circuit ruled on the spot yesterday affirming the district ct's ruling for trans inclusion in Boyertown! Historic precedent now set for PA, NJ, DE, and the US VI. Ty to the trans students at Boyertown and the GSA and our lawyers at the @aclupa and @ACLULGBT!”

We WON! The US Third Circuit ruled on the spot yesterday affirming the district ct's ruling for trans inclusion in Boyertown! Historic precedent now set for PA, NJ, DE, and the US VI. Ty to the trans students at Boyertown and the GSA and our lawyers at the @aclupa and @ACLULGBT! pic.twitter.com/bDme6fXK6L

Among the plaintiffs represented by ADF were two unnamed boys from the school who “learned about the policy while they were undressed in the locker room and noticed a girl changing next to them.”

Student Alexis Lightcap discovered the school’s policy when she encountered a boy in the girls’ restroom.

At an ADF press conference outside the courtroom after the short hearing, Alexis recounted her concern about the school policy:

When I was younger, my sister and I were in the foster care system. It was a difficult experience. I felt like my life was out of control, and that no one heard me when I spoke. I had no voice.

Fortunately, my forever family adopted me and my sister when I was 11. It was an indescribable experience. I thought I would never again have to feel like I had no voice.

Then one day, during my junior year of high school, I was shocked to see a boy in the girls’ bathroom. I froze, and I was scared.

I told a teacher and the principal, that it’s their duty to make sure kids are safe, and that their rights are protected at schools. I was sure they would tell the boy he was wrong for him to be in the girls’ bathroom, but they didn’t.

They said this is the way things are going to be.

Instead of listening to my concerns, they made me feel like I was the problem for feeling uncomfortable, unsafe, and vulnerable with a boy in my bathroom.

Once again I felt like my life was out of control, that I didn’t have a choice about my own personal privacy.

I spoke up and told the people who are supposed to protect me, but they didn’t listen to me. It was like I had no voice.

As a girl, I don’t want a boy in the room where I change clothes or take a shower.

I know what real discrimination feels like, and I don’t want anyone else to go through what I had to.

“It’s common sense that boys shouldn’t be in girls’ locker rooms, restrooms, and shower areas,” added Alexis. “Every student matters, and the school should put our privacy, safety and dignity first.”The full written unanimous opinion by the three-judge panel will be issued at a future date.