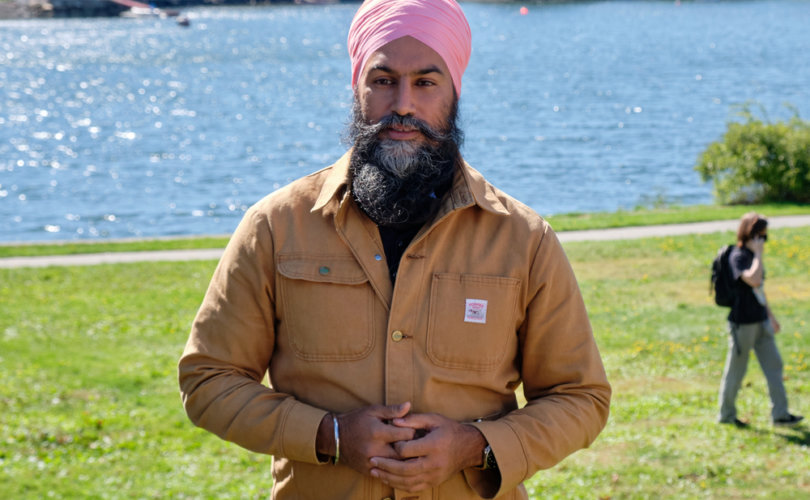 In a letter dated September 29 and addressed to Trudeau and Minister of Health Patty Hajdu, Singh wrote that Alberta Premier Jason Kenney has done such a bad job of dealing with the COVID situation that “action is needed.”

“We recognize that health is predominantly a provincial jurisdiction, but considering the dearth of leadership shown by Jason Kenney and his United Conservative government, we implore the federal government to use the tools at its disposal to protect Albertans,” Singh wrote.

“This is an urgent emergency and we cannot wait for the House of Commons to resume. We must take action now.”

Citing a “disastrous fourth wave” of COVID, Singh argued that Kenney has been “absent” as a leader and that the federal government must “intercede to protect the lives of countless Albertans.”

His letter mentioned claims that are in fact, even at the time of its release, outright falsehoods.

Singh contends that Kenney has not “implemented” a vaccine passport or instituted more lockdowns.

Despite the fact he was against vaccine passports initially, Kenney relented and launched one in Alberta, which has been in place since mid-September.

Kenney has also enacted rules banning the “unvaccinated” from gathering together and has put a cap on attendance at churches.

He has also mandated mask-wearing and enacted physical distancing rules for some businesses.

In the letter, Singh also writes that healthcare workers are “exhausted” and the hospital system in Alberta is on the verge of “collapse.”

However, despite hospital staff no doubt being under extra pressures lately, an emergency room physician from Alberta claimed that the hospital capacity crisis in his province was “created,” is nothing new, and is not from COVID-19 patients.

Dr. Gary Davidson recently said, “We have a crisis, and we have a crisis because we have no staff, because our staff quit, because they’re burned out, they’re not burnt out from COVID.”

Davidson said that the current crisis “has nothing to do with COVID, it’s been going on for six years, and it was created” while Alberta was under NDP Premier Rachel Notley.

“So, about six years ago, we had a government come in and about two years into their mandate they started cutting positions in our department,” Davidson noted.

Constitutional lawyer:  Singh’s letter ‘more a political and rhetorical document than’ a legal one

John Carpay, president of the Justice Centre for Constitutional Freedoms (JCCF), told LifeSiteNews that he highly doubts even “real mismanagement of a certain responsibility by one level of government amounts to adequate legal grounds for another level of government to step in and take over.”

“Mr. Singh’s letter is more a political and rhetorical document than a legal or constitutional one,” Carpay said.

“If our constitution allowed for such ‘takeovers,’ we would see endless controversies over this, because the federal and provincial governments often criticize each other about mismanaging various portfolios.”

Carpay said that, to his knowledge, he is not aware of any “unusual constitutional provision that empowers the federal government to violate provincial jurisdiction on the basis of some emergency or crisis.”

“But if such provision exists, Mr. Singh does not reference it in his letter, and presumably he has access to legal counsel to assist him, who would have provided him with that information, if such section exists,” Carpay told LifeSiteNews.

The provincial NDP party in Alberta has the ears of the largest unions in the province, those being in the healthcare and education sector.

He wrote that his party has spoken to “hundreds of healthcare workers” who are at their “limit.”

“The federal government could step in and assist with support for healthcare workers and to ensure nurses are available from other regions. This could mean working directly with nurses unions, providing funds to incentivize retired nurses to return to work for the duration of the pandemic, or support Alberta in providing nurses with emergency pay increases in line with jurisdictions like Quebec and Ontario,” Singh wrote.

Singh added that schoolteachers and staff are “terrified” at the COVID case count in Alberta schools, and that the Trudeau government should “step in and protect Albertans by providing additional support for contact tracing, testing and reporting infection rates in schools across Alberta.”

Healthcare in Canada is provided by each province, which alone has full jurisdiction on all aspects relating to the delivery and setup of the medical system.