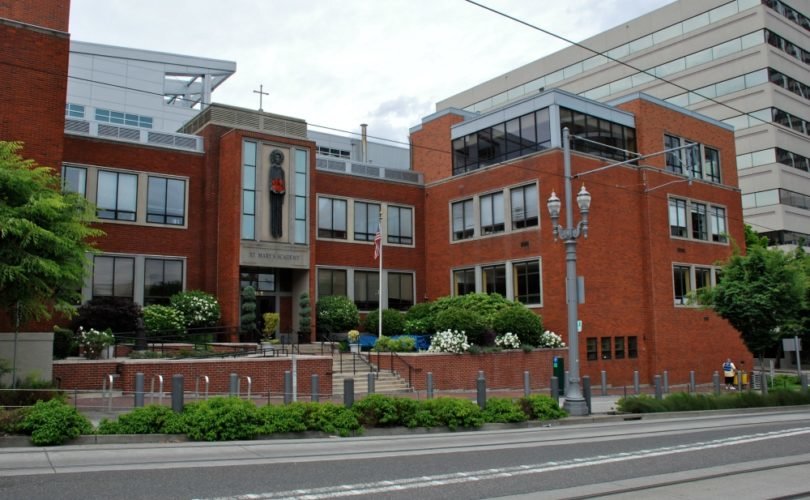 PORTLAND, OR, September 2, 2015 (LifeSiteNews) – An Oregon Catholic school modified its employment policy and is now allowing employees to stay on board while claiming to be married to members of the same sex, placing it at odds with the Catholic Church and Catholic institutions elsewhere in the U.S. taking steps to strengthen Catholic identity.

The Board of Directors for St. Mary's Academy in Portland voted August 26 to add sexual orientation to its equal employment policy, “to amend and broaden St. Mary's policy on equal employment,” and bring it “in line” with the school's “mission and beliefs.”

While its action is incongruous with Catholic principles, the Board said in its announcement that the school remains deeply committed to its Catholic identity.

“St. Mary's is a diverse community that welcomes and includes gay and lesbian students, faculty, alumnae, parents and friends, including those that are married,” it said. “We are proud of our work preparing the next generation of women leaders for service and leadership. We are still deeply committed to our Catholic identity.”

Backlash occurred last week after St. Mary's rescinded an employment offer to a candidate the school learned was a lesbian planning to “marry” her same-sex partner, according to Christian Today.

An attorney for Lauren Brown denied that Brown was “engaged” and had impending plans to “marry.”

The Catholic Church teaches that marriage is the sacramental union between a man and a woman.

In a statement earlier in the day of the reversal, St. Mary's President Christina Friedhoff appeared to explain the school's move to remove Brown's job offer, according to The Oregonian, with a curious reference to the Church's “current” teaching.

“St. Mary's nurtures the Catholic identity, practice, culture and mission on which we were founded,” Friedhoff stated. “We understand that others may hold different values, and we respect the right of individuals in society to do so. At the same time, as a Catholic high school we are obligated to follow current Catholic teachings regarding same-sex marriage in our employment practices.”

St. Mary's Academy subsequently offered the job to another applicant and offered Brown a year's salary to settle the issue, which she refused.

The archdiocese may face a lawsuit from Brown, according to its newspaper, The Catholic Sentinel.

As of September 1, the archdiocese had the following statement on its homepage:

Due to the sensitivity of the ongoing discussions between St. Mary's and the Archdiocese, both parties are committed to keeping our conversations private.

Students and alumni contributed to the hostile response after the school withdrew its offer to Brown.

A group of students and alumni gathered last week before the school's policy reversal to make gay pride t-shirts for students to wear the first day of school, September 2. They spray-painted Pope Francis's frequently misused quote, “Who am I to judge?,” on the shirts. The quip is often taken out of contest for use in support of the homosexual agenda.

“This is a nationwide problem, it's not only St. Mary's,” said senior Charlotte Karlsen, who organized the t-shirt event.

Karlsen also created a hashtag, #FightforSMA, to protest the school's decision to back out of Brown's job offer, and a private Facebook group for current students and alumni to confer on the decision.

“Since the day that I've come to St. Mary's, they've been shaping me for a day like this where I would put everything that they've taught me to the test,” Karlsen said in a report from The Oregonian. “Ethically, morally and my ability to make change in the world.”

A group of students also showed up at the school last Wednesday and defaced the school's statue of Mother Marie-Rose Durocher, founder of the school's sponsor order, the Sisters of the Holy Names of Jesus, with pro-homosexual regalia.

Tim Boyle, a major donor to the school and chief executive officer of Columbia Sportswear Co., condemned the school for its decision and stated there should be no employment discrimination based on sexual orientation.

Boyle and his wife, an alumna, released a statement.

“We are extremely disappointed in the decision by St. Mary's Academy to terminate an offer of employment based on sexual orientation and objections to marriage equality,” they said, according to Willamette Week. “We feel strongly that the position taken by St. Mary's, as reported in the press and reflected in communications from the school, was wrong and should be reversed.”

An August 28 statement from President Christina Friedhoff on the St. Mary's Academy homepage spells out the school's position on the issue, saying it was wrong to walk back its offer of employment to Brown:

To the St. Mary's Academy community:

St. Mary's is a diverse community that welcomes all students, faculty, alumnae, parents and friends.

We now recognize that our decision to rescind the job offer to Ms. Brown after we learned of her intent to enter into a same-sex marriage did not reflect St. Mary's mission and beliefs.

“The Archdiocese and St. Mary's Academy are in discussion regarding the recent policy change by the Board of Directors and committed to continued conversation.”

This has been a difficult period for our community and we are committed to healing and to moving forward with transparency.

We are proud of our work preparing the next generation of women leaders for service and leadership. We remain deeply committed to our Catholic identity.

Catholic institutions elsewhere across the country have been taking steps in recent years to augment Catholic identity in an effort to counter threats to the Church's character.

Eastside Catholic School in Seattle stood by its 2013 decision to release a vice principal who had entered into a same-sex “marriage.”

Waldron Mercy Academy in Merion, PA chose to not renew the contract earlier this year of its director of Religious Education who was involved in a homosexual “marriage.”

Sacred Heart Academy in Buffalo opted to not announce a homosexual “marriage” in its alumni publication last year after Bishop Richard Malone intervened.

Lesbian: I use math class to teach young kids about homosexuality so I can ‘hide’ it from parents