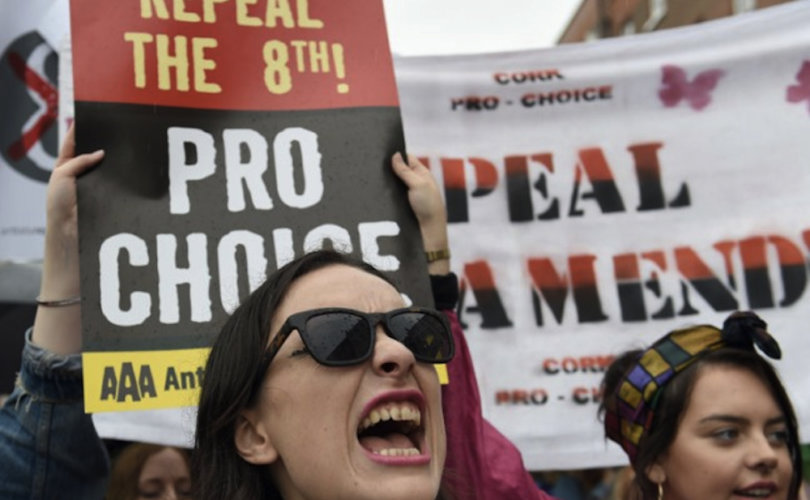 April 24, 2017 (SPUC) — The Citizens' Assembly, the Irish body charged with examining the Eighth Amendment of the Constitution, which protects the equal right to life of the mother and baby, recommended this weekend that Ireland legislate for abortion, with many saying there should be no restrictions at all.

The Assembly, which consisted of 99 people randomly selected by a polling company and chaired by a Supreme Court judge, Ms. Justice Mary Laffoy, voted on a series of questions on Saturday, April 23, and Sunday, April 24.

In the first ballot, a substantial majority (87 percent) voted that Article 40.3.3., known as the Eighth Amendment, should not be retained in full. The second ballot stopped short of completely repealing it, with 56 percent voting that it instead be replaced and amended. In the third ballot, 57 percent voted for a constitutional change allowing the Oireachtas to legislate on abortion, as opposed to 43 percent advocating direct provision.

The most shocking results from the weekend's meeting emerged from a series of ballots addressing situations in which abortion might be permitted. The Assembly voted to legalise the killing of unborn babies in 13 separate cases including rape, foetal abnormalities, and socio-economic issues, and there was a substantial vote in favour of eliminating any distinction between the physical and mental health of the pregnant woman. Almost two-thirds of the Assembly voted for decriminalisation of abortion, with almost half (48 percent) recommending an unrestricted right to kill an unborn baby in the first three months of pregnancy, and 44 percent saying this should be extended to 22 weeks. Eight percent thought there should be no restrictions on gestational age.

Right to life not subject to vote

Pro-life groups immediately condemned the process as one sided, and as not being reflective of the views of the majority of the Irish people. Maria Madise, SPUC's International Director, said: “”These results from the Citizen's Assembly are appalling but not surprising. The process was flawed from the beginning, and was set up by the Irish Government to deliver a decision calling for a referendum on abortion but keeping the process at arms length from the government. Nevertheless, the Irish state has a moral and legal obligation to protect the human rights of everyone within its jurisdiction.

“The right-to-life is the most fundamental of all human rights and is recognised by international law. No state, no legislature, regardless of public opinion, can abrogate or deny fundamental human rights. Therefore, all calls to hold a referendum must be rejected by Irish lawmakers and by the Irish people, because the right-to-life is non-negotiable and can never be subject to a vote.”

Reality of 50 years of abortion

Pat Buckley, SPUC's UN and Ireland consultant, added: “This result in no way reflects the view of the Irish people. It is particularly horrifying that the members, who heard first hand the reality of abortion, voted to allow it in almost any circumstance. Those who voted for abortion with no restriction should look to the example of the UK, where 50 years of legalised abortion has led to nearly 9 million dead babies and countless numbers of women being damaged. We do not believe that most Irish people want this for their country, and urge people to reject this flawed Assembly and continue to protect the lives of mothers and babies.”

The results of the voting process will be included in a report to be submitted to the Dáil sometime in June and will initially be considered by a 20-member Oireachtas Committee, which may or may not take on board the recommendations of the Assembly, either in full or in part, and will decide whether or not legislative changes should be put to the two houses of the Oireachtas, the Dáil and Seanad. It is now likely that those recommendations will include a call for a new referendum, which could be held early next year.