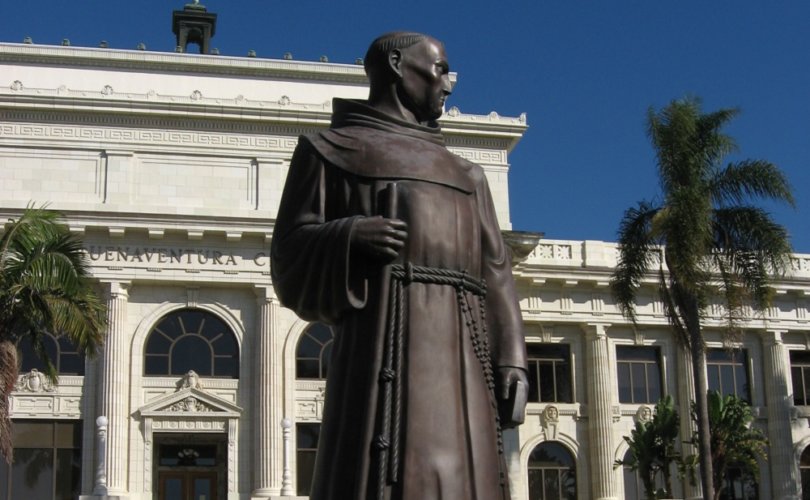 August 10, 2020 (LifeSiteNews) — A community-led campaign in San Buenaventura, California, is demanding that local officials restore a statue of the city’s founder, St. Junípero Serra, to its place in front of city hall, where it had stood for over eighty years, until last month.

From June 20, when a chanting mob at a “Tear Down Junípero Serra” event attempted to follow through on their threat, through two long online city council meetings, right up to the pre-dawn hours of July 23, when city workers removed the statue, the heroic people of this mission city have fought back at every step of the way.

After the initial threat upon the monument in late June, Venturans from diverse backgrounds quickly organized themselves to more effectively fight back against the violent mobs and the city’s first attempts to destroy Father Serra’s good name and his place in Californian history.

In hours of public comment and thousands of letters and emails, residents expressed outrage and alarm about the city’s proposal to remove the statue and asked that the question be put to the voters. However, on July 15, less than a month after the statue’s removal was first mentioned, the City Council unanimously voted that the statue was not a landmark and should be removed from its place of honor.

Only a handful of locals were awake and watching when, on July 23, at three in the morning, the city workers arrived in the misty darkness to dismantle their founder’s monument. The locals huddled around the statue pedestal until they were forced back by four policemen. They continued to beseech the city officials and crane company manager to halt the removal and harried them for their participation until the statue was strapped to the back of a flatbed truck and shipped off to an undisclosed warehouse in L.A.

The city has already removed the wooden statue that was used as the model for the molding of the bronze statue, which has stood in the City Hall atrium since the 1980s. The city has not reported how it disposed of it.

The Coalition for Historical Integrity (CHI), a group of concerned Venturans represented by local attorney James McDermott, filed a lawsuit on July 21 against the City of San Buenaventura, requesting that the Ventura Superior Court void the actions taken by the City Council. If the court rules that the city illegally removed the landmark status of the monument, the city could be required to place the statue back in front of City Hall.

The County Board of Supervisors is now considering removing Father Serra from Ventura County’s seal and police badges.

Ventura locals are bringing the community together on August 15 to fight these erasures of Father Serra. They’ve organized a large rally to be held at the now empty pedestal in front of City Hall to demand the return of their monument. This event is not just a demand, but also a celebration of their history, they report.

“Join us in demanding the return of our Father Serra monument and asking that the Ventura City Council and County Board of Supervisors respect and preserve our diverse, beautiful California history!” reads one August 15 rally flier.

“Many different races and cultures brought their unique gifts together in creating today’s California. Let us remember our true history and take pride in its cultural collaboration!” reads another.

Promoters of the rally say their message, that the battle for Father Serra continues, has been well received by the public.

“I hadn’t realized how many Ventura residents were upset by the removal of the statue until I was on a street corner advertising the August 15th rally. We had so much positive feedback from people who wanted the statue returned to its spot,” says Emily Lyons, 23, a Ventura resident who, during the last few weeks, in her time off work, has been promoting the rally in downtown Ventura. “It was really encouraging to realize how many people were on our side — and were ready to do something about it!”

With no end in sight to CHI’s lawsuit and three city council seats opening up in the fall, the locals don’t expect this battle to bring home their founder to be quick or easy.

“Thank you for what you’re doing, girls!” called out one store owner on Main Street, Ventura, just below where the statue stood, to three volunteers handing out rally posters to the storekeepers. “I totally support your cause. Good luck!”

To read more about the people of Ventura’s fight for their monument, visit defendserra.com. To donate to their cause, visit their GoFundMe.