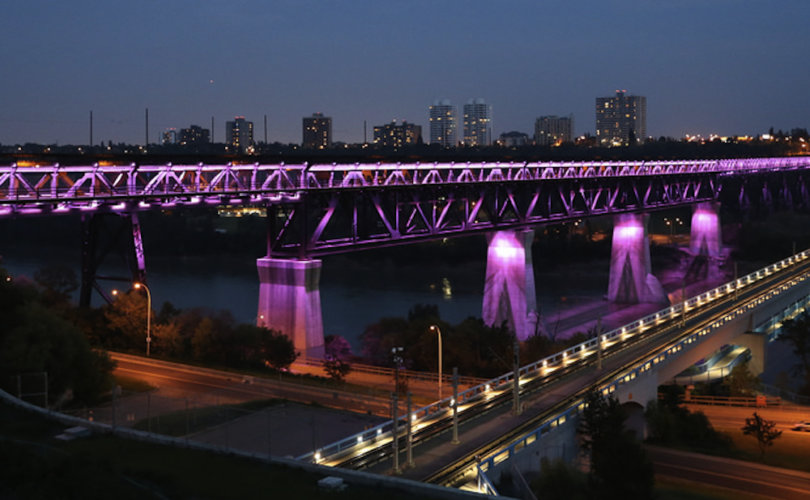 EDMONTON, Alberta, May 11, 2017 (LifeSiteNews) – The City of Edmonton backtracked and abruptly cancelled plans to light up its High Level Bridge for Alberta's provincial March for Life this week, because the pro-life request does not meet its guidelines for events with a positive community impact.

The abortion issue is “really polarizing,” a city representative said, making the pro-life request to light the bridge something the city would not support.

“We cancelled it at the last minute because the request itself did not reflect the voice of the community as per our guidelines,” said Nicole Poirier, the city’s director of civic events and festivals. “It’s normally (lit up for) events that are major events and cultural celebrations, or support for local festivals and events that positively impact the local community spirit.”

The mix-up was due to an employee oversight, according to Toronto Metro News. The news outlet's headline said, “Edmonton almost accidentally lit” the bridge for an “anti-abortion group.”

The city had tweeted Sunday afternoon and linked to the Love Life Ribbons Foundation website:

The bridge will be blue, pink & white for Alberta March for Life. @LifeFndn https://t.co/OhaxWSFkTy #LightTheBridge

The City of Edmonton was promptly assailed on Twitter, with one user stating, “Why do you hate people with uteruses?”

Others called the plan to light the bridge for the pro-life group offensive, alarming, inappropriate and “extremely disappointing.”

The city reversed course in under four hours and apologized on Twitter:

.@LifeFndn The March for Life does not fit our criteria for #LightTheBridge We apologize and will be reviewing our protocols.

Since then, the city has announced the bridge would lit up orange for an Edmonton Oilers win, teal for World Ovarian Cancer Day, and sage green for local seniors’ group event.

The High Bridge spans the North Saskatchewan River in Edmonton. It was originally opened in 1913, designed to accommodate rail, streetcar, automobile and pedestrian traffic. The bridge has undergone updates through the years. LED lights were added in 2014 to light the bridge in numerous colors in conjunction with local events.

Applications to light the bridge are reviewed by the city and approved if they meet its criteria, according to Poirier. If the proposal appears to be something that might be polarizing, a committee will review it.

However, in this instance, “the person reviewing the applications wasn’t fully aware” the request came from an “anti-abortion” organization, she said. Thus, the application did not get flagged for review before approval.

Poirier said the city would normally not light the bridge for an “anti-abortion” group or a pro-choice group, the Metro report said.

“Those are really polarizing issues in a community and that’s not normally something therefore that we would support,” said Poirer.

March for Life Vice President Jerry Pasternak said the group is “disappointed” in the city’s cancellation of the bridge lighting for the March for Life, in its 10th year this year.

“As far as we’re concerned, (the city) gave into radical demands,” he said.

Alberta Pro-Choice Coalition spokesperson Kathy Dawson said her group is happy that the city “acted so quickly to protect the rights of women, trans men and nonbinary people.”