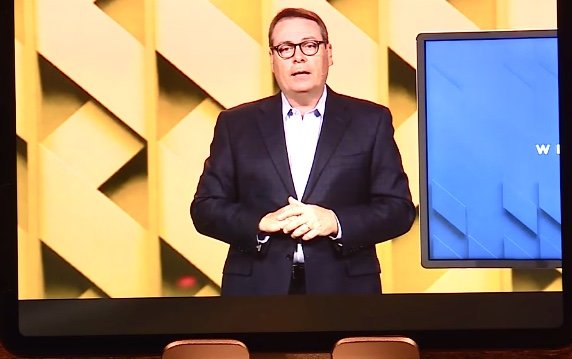 Chris Hodges is senior pastor at the Church of the Highlands in Birmingham, Alabama.YouTube

The church also was banned from leasing public high schools for its worship services.

According to a report by AL.com, senior pastor Chris Hodges was first denounced by high school English teacher Jasmine Faith Clisby, who pointed out on Facebook that “Hodges, founder of the Church of the Highlands, repeatedly ‘liked’ social media posts by (Charlie) Kirk.”

Kirk is the founder and president of Turning Point USA, a national student movement promoting the principles of free markets and limited government among young people.

Clisby does not even attend services at that church and admitted that she was “not saying he’s a racist. I’m saying he likes someone who post (sic) things that do not seem culturally sensitive to me.”

Kirk has argued frequently on Twitter that the concept of “white privilege” does not exist in reality, and instead talked about a “good choice privilege.” According to Kirk, making three good choices would lead to a person not living in poverty in America: graduating high school, getting a job, and getting married before having kids.

The color of your skin doesn't determine your success in America

Learn more and get the facts you need to push back against the left's racist lies: https://t.co/Ru5OQ7YzH0pic.twitter.com/Oc4TBGqomk

Clisby pointed to a meme shared by Kirk and liked by Hodges. It featured a photo of Donald Trump standing alongside Muhammad Ali and Rosa Parks with the caption, “The racist Donald Trump in the 1980s.” Another photo next to it showed Democratic Virginia Gov. Ralph Northam wearing blackface in a 1984 yearbook photo for Eastern Virginia Medical School. The caption for that photo was “Progressive Leftist Ralph Northam in the 1980s.”

“Another screen shot showed Hodges liking a post about former President Barack Obama playing golf beneath a quote from Michelle Obama urging people to stay home except for essential activities,” AL.com wrote. “Another screen shot shows Hodges liking a photo of Kirk donating blood above the sentence, ‘We all must do our part to defeat China Virus.’”

Although the memes do not appear to be racist or incendiary, instead offering a humorous take on the hypocrisy of politicians and other public personas, Hodges bent over backward and issued an apology on June 2.

“I realize that I have hurt people that I love deeply because I ‘liked’ multiple insensitive social media posts,” said Hodges. “Each one was a mistake. I own it. I’m sorry. I’ve learned so much in the past few days about racial disparities in America. I wish I could sit down and have a conversation with everyone impacted or hurt by my actions.”

“I have the responsibility of learning new thoughts and new points of view,” he added. “Conversations I wish I had engaged in years ago will now shape who I will be in the years to come. Soon, I will be holding forums at our church to hear from Highlands members of all races to share their experiences and heart. I am determined to listen, learn, and be a part of the solution.”

Only days later, the Housing Authority of the Birmingham District (HABD) Board of Commissioners voted to end a partnership with Church of the Highlands that allowed the church to offer “mentoring, community support groups and faith and social service activities that promote volunteerism” at public housing communities.

Church of the Highlands never received any compensation from the Housing Authority for providing its outreach programs.

Indicating that Hodges’ apology and willingness to adopt “new thoughts and new points of view” were not enough, the Housing Authority stated, “Commissioners agreed that Pastor Hodges’ views do not reflect those of HABD and its residents; and Hodges’ values are not in line with those of HABD residents.”

“HABD and Campus of Hope staff will continue to work with other faith-based organizations in the community to identify resources that will replace the services that were provided by (Church of the Highlands),” the statement continued.

One day later, on June 9, the Birmingham Board of Education voted “to terminate its leases with the Church of the Highlands, which had been paying Birmingham City Schools $6,000 a week to rent the facilities at Parker and Woodlawn High Schools on Sunday mornings.”

Another week later, in his sermon on June 14, the pastor said, “I am not the same Chris Hodges I was two weeks ago. Do I have a long way to go? Yes, sir. But I can look you in the eye and say I have been tested, stripped, disciplined, broken.”

Meanwhile, Church of the Highlands implemented a “commitment to diversity” on its website. The community promised to “fervently pray against the spirits of racism, hatred, and prejudice that would seek to divide humanity. We acknowledge that there is more to be said and done to see our cities, our country, and our world healed from the evil of racism and for reconciliation to take place.”

The church’s members want to be “agents of change in the days, weeks, months, and years to come. Therefore, we commit to being a church that makes every effort to promote unity in the body of Christ and the world. We recognize that our voice and our response is vitally important. For this reason, we are committed to taking continual steps of learning, lamenting, and loving so we can be a bridge towards reconciliation.”