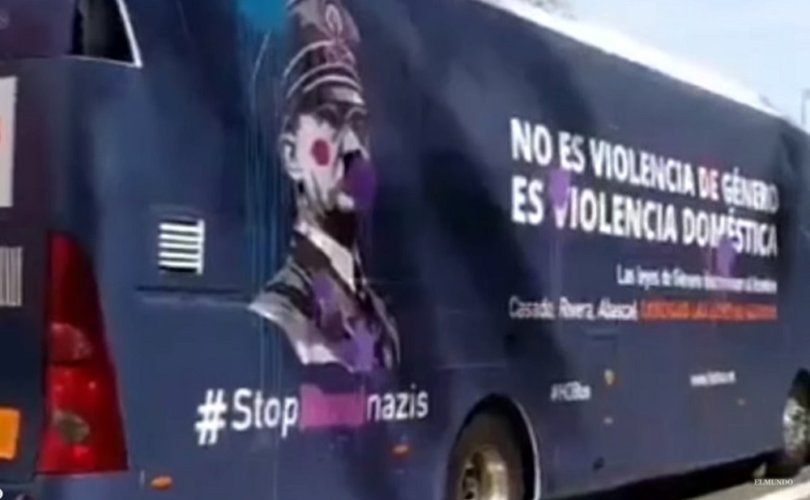 HazteOir (“Make Yourself Heard”) received a notice on Tuesday that Barcelona’s municipal government proposes to set a fine of 60,000 euros as a sanction, charging that the pro-family group had violated a city ordinance. The city’s Institute for Urban Landscape and Quality of Life determined that a bus that traveled to Barcelona bearing HazteOir’s message denouncing “feminazis” was offensive.

In March, the purple HazteOir bus came to Barcelona as part of its national tour. It was festooned with the message “It’s not gender violence, it’s domestic violence” and called on politicians to overturn laws imbued with gender ideology. HazteOir has campaigned against laws that discriminate against men and eliminate the presumption of innocence. The messages were accompanied by an image of Adolf Hitler adorned with red lips and cheeks in the fashion of a drag queen. On the mass murderer’s cap was the symbol of radical feminism in place of the Nazi swastika.

According to Barcelona’s authorities, HazteOir has allegedly committed a “very grave” offense against the city’s Ordinance on the Use of Urban Landscapes, plus two more that are considered “grave.” In its charge against the civic group, the city claimed that HazteOir had engaged in the spreading of “messages that impinge upon the dignity of the person [and] violate the values ​​and rights recognized by the Spanish Constitution, especially in reference to children, young people, women and the most marginalized social sectors.”

The city also charged that HazteOir had violated regulations that “prohibit publicity activities that comprise placing materials on windows or other areas on vehicles.” Also prohibited, the charge states, are “publicity activities in cases that affect public interests in general.”

HazteOir has six months in which to pay the fine, while it has ten days to prepare an appeal. If the group admits to the charges, it could be granted a remission of 20% of the fines assessed.

HazteOir’s bus tour brought out masked extreme leftists and feminists in protest, who threw rocks and vandalized the bus. Police were on hand to separate the radicals from the bus and allow it to circulate.

In March, city prosecutors charged HazteOir with a hate crime, accusing the group of spreading messages that assail “women’s dignity, rights and freedom, creating a climate that normalizes discrimination against women and insults them with links to the national-socialist [Nazi] regime.” The prosecutor attached to the city’s Hate and Discrimination Office claimed that HazteOir had sought to spread “humiliation or at least discredit upon all women and against organizations that defend the equality of women and men, even though this is not protected speech.”

HazteOir has had several campaigns throughout Spain, using its bus to denounce abortion, radical feminism, and the LGBT agenda and calling politicians to account. The group is currently fighting government efforts to eliminate its nonprofit status because of its positions on family and marriage. HazteOir has charged the Spanish government with seeking to squelch free speech and freedom of association.