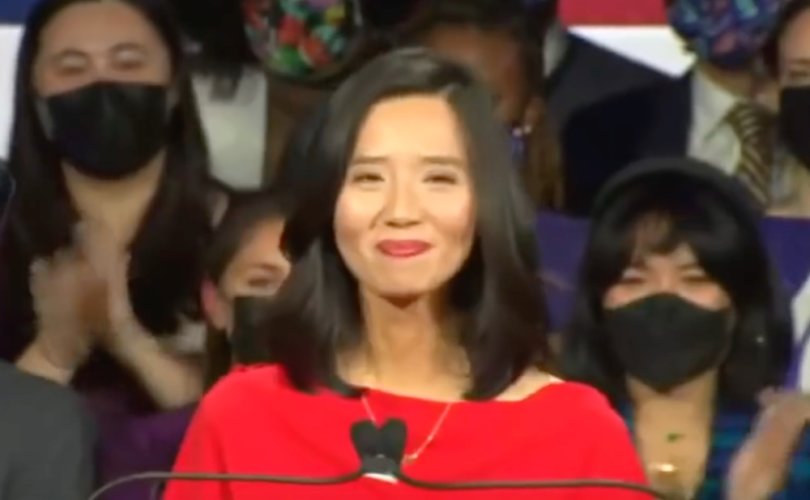 BOSTON, Massachusetts (LifeSiteNews) — Boston city employees can get three months of paid leave if they abort their babies.

For the past two months, government employees have been able to get time off after an abortion, thanks to a parental leave change pushed by Michelle Wu, the newly-elected Mayor of Boston. Wu is being sworn in today.

The amendment passed in September “amends the current ordinance by applying the paid parental leave benefit to parents that have experienced a loss of pregnancy.”

“Passage of this ordinance would provide a paid parental leave benefit to city employees (parents) in the event of a natural birth by any method, adoption, surrogacy, and loss of pregnancy. Docket #0481 would also extend the paid parental leave to 12 weeks from six weeks,” the new policy says.

Wu first proposed including abortion under the “loss of pregnancy” standard in March of this year.

“The councilors are seeking to amend the language of the law to state ‘loss of pregnancy,’ thereby covering miscarriages, terminations, instances involving dilation and extraction, and other situations under the policy,” the Boston Globe reported in March.

Supporters of the change cited the devastating effects of miscarriage, which is unintentional, to justify the broader policy of abortion, which is the intentional killing of a baby.

“I think this makes us more equitable,” Councilwoman Lydia Edwards said in March.

“This makes us stronger as a city and acknowledging that there’s a loss of pregnancy [sic] and that a person may, they’re not required (to), but they may need to take leave in order to deal with that.”

Mayor Michelle Wu campaigned for her new position on a platform that included “gender-affirming” healthcare, which refers to supporting people who think they are “transgender.”

Her website boasts of her work to pass “legislation securing inclusive health care access for all City employees, prohibiting discrimination based on gender identity.”

The 2014 city ordinance “will allow city employees who identify as transgender to get full coverage for the costs of therapy and gender reassignment surgery under the city’s healthcare plan,” Boston Magazine reported.

She also received the endorsement of abortion giant Planned Parenthood.

The abortion vender praised Wu’s work on the parental leave legislation as well as her support for the state ROE Act, which would allow for abortions through all nine months of pregnancy.

“Councilor Wu publicly championed and advocated for the ROE Act. She will use her platform as Mayor to speak out against attacks on abortion rights, push for proactive policies that advance health equity, and uplift the stories of Planned Parenthood patients,” the abortion business added.

Wu previously pushed through legislation to allow for “X” to be used as a gender on government forms and to mandate “gender inclusive language.”