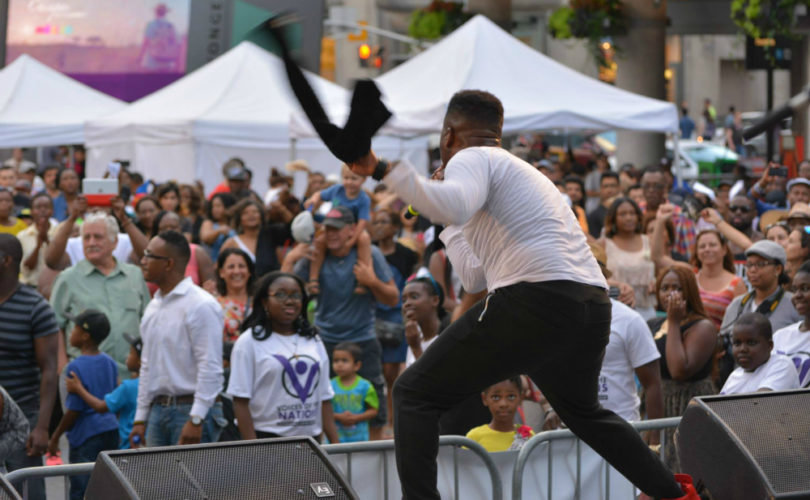 A scene from the 2015 Voices of the Nations festival

Sign the petition demanding that the City of Toronto reverse its decision to ban Voices of the Nations here.

Note: A rally in support of Voices of the Nations is scheduled for Saturday at 1:00 pm. at Yonge-Dundas Square. Find out more here.

TORONTO, November 20, 2015 (LifeSiteNews) — The City of Toronto has agreed to hear an appeal from a Christian group after it was banned last month from using a prominent downtown square for its annual musical festival on account of musicians singing about Jesus.

The Justice Centre for Constitutional Freedoms, the legal group representing Voices of the Nations, will make the appeal to the square’s Board of Management December 10 at Toronto City Hall.

Wynna Brown, manager of media relations and issues management for the City of Toronto, told LifeSiteNews that the appeal process exists for “applicants that do not meet the guidelines, or disagree with permit decisions.”

“Upon written request, the Board of Management will review and consider such matters at one of its regularly scheduled meetings,” she said.

It was almost a month ago when the Christian group was told that it would not be given a permit for its annual event in the City’s downtown Yonge-Dundas Square, where the group had been celebrating Christianity through a live music and dance event without issue for the past five years.

On October 22, Natalie Belman, the manager of events for Yonge-Dundas Square told the group it had violated the City’s policy against “proselytizing” by signing the name of Jesus.

“If you’re praising Jesus, ‘praise the Lord,’ and ‘there’s no God like Jehovah,’ that type of thing, that’s proselytizing,” she told the group in a recording of a phone conversation obtained by LifeSiteNews.

On November 3, the Justice Centre issued a legal warning letter on behalf of the Christian group to the City of Toronto, demanding that the group’s application be approved by Tuesday, November 10, or the City would face “court action.”

On November 9, one day before the deadline, Voices of the Nations delivered petitions with over 40,000 signatures — 30,000 collected by LifeSiteNews and the remainder by TheRebel.media — to Mayor John Tory’s office demanding that the City reverse the decision.

But the City failed to meet the November 10 deadline to reverse the ban, which prompted the Christian group to ramp up preparations for a rally, taking place this Saturday, in support of Christian expression in the public square.

Voices of the Nation’s president Peter Ruparelia hopes that anyone concerned about religious freedom will attend the November 21 rally happening at Young-Dundas Square beginning at 1:00 PM.

“I urge every Christian to come out to the rally. Let's show City Counselors and Mayor Tory that we will not sit back and be victimized,” he said.